A video verified by The New York Times appeared to show an Iranian missile exploding near a plane above Parand, near Tehran's airport, the area where the jetliner, stopped transmitting its signal before it crashed 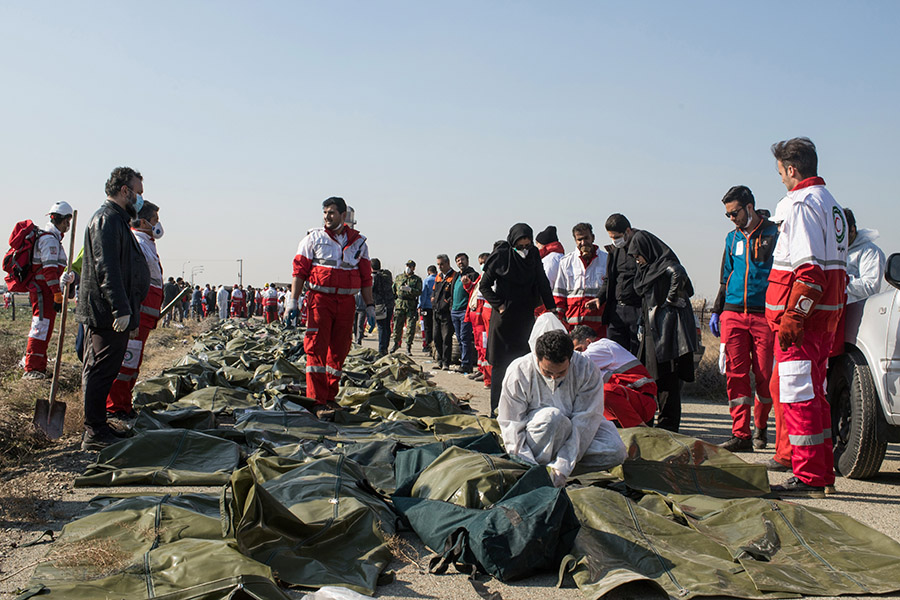 Bodies lie covered near the site of the Ukraine International Airlines crash on the outskirts of Tehran on Wednesday, Jan. 8, 2020. A Ukrainian Boeing 737-800 carrying at least 170 people Wednesday crashed shortly after takeoff from Tehran, killing everyone on board, according to the Iranian state news media. (Arash Khamooshi/The New York Times)

WASHINGTON — American and allied officials said Thursday that they had intelligence that missiles fired by Iranian military forces were responsible for the downing of a Ukrainian jetliner in Iran and the deaths of all aboard this week in Iran, most likely by accident.

The disclosures suggested that the deaths were a consequence of the heightened tensions between Washington and Tehran that have played out since a U.S. drone strike killed a top Iranian general last week.

Prime Minister Justin Trudeau of Canada, citing a preliminary review of the evidence, called for a full investigation “to be convinced beyond all doubt.” The jetliner was carrying 63 Canadians among its some 176 passengers and crew.

“We recognize that this may have been done accidentally,” Trudeau said. “The evidence suggests very clearly a possible and probable cause for the crash.”

President Donald Trump, speaking earlier at the White House, said only that he suspected that the downing of the plane was the result of “a mistake on the other side.” Senior U.S. officials were more forthcoming, saying they had a high level of confidence in their findings. U.S. intelligence agencies determined that a Russian-made Iranian air defense system fired two surface-to-air missiles at the plane, one official said.

And video verified by The New York Times appeared to show an Iranian missile exploding near a plane above Parand, near Tehran’s airport, the area where the jetliner, Ukraine International Airlines Flight 752, stopped transmitting its signal before it crashed.

Even before world leaders and U.S. officials confirmed the intelligence assessment, the mysterious circumstances of the disaster had raised suspicions that a missile brought down the airliner. The crash occurred hours after Iran launched a barrage of ballistic missiles at U.S. military targets in Iraq, and Tehran, bracing for possible American retaliation, readied its ample air defense system.

Iran denied that its military was responsible for the crash of the plane, a Boeing 737. Ali Rabiei, an Iranian government spokesman, called it “a big lie” and blamed the accusations on “psychological warfare” against Tehran.

Iran invited the U.S. National Transportation Safety Board to assist in the investigation despite previous reports that the Americans would not be involved, according to correspondence reviewed by The Times.

Tweets by @forbes_india
Competition in the 2010s led to better car technology': Maruti's RC Bhargava
Facebook says it won't back down from allowing lies in political ads