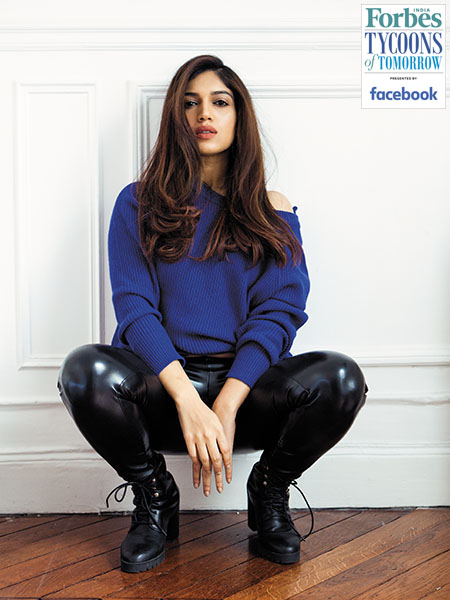 
Bhumi Pednekar insists that she prefers quality over quantity. That perhaps explains her solo release this year—Lust Stories on Netflix. And her performance in Zoya Akhtar’s film was widely appreciated despite the near absence of dialogues for her character. “Lust Stories taught me that there can’t just be one method of conveying something. You don’t always need words. Even if we feel it [the emotion] as human beings, we have the capability of communicating it in so many different ways. It has truly added a lot to me as a performer,” says Pednekar, a member of Forbes India’s 30 Under 30 List for 2018.

It is this understanding and evolution of her craft that has the 29-year-old actor excited. She is proud of her choices in a three-year-old career that includes three films—Dum Laga Ke Haisha (2015), Toilet: Ek Prem Katha (2017) and Shubh Mangal Saavdhan (2017). All of them have received accolades from the masses and critics.
Click here for the full Tycoons of Tomorrow list

“I am somebody who likes giving enough time to every character I play. As a result, if I end up doing fewer films, I am fine with that. I want every character of mine to be remembered, to be eternal. I want it to be a fulfilling experience, a fulfilling film,” says Pednekar, adding that patience as a virtue has held her in good stead.

It has also landed her plum projects, like filmmaker Karan Johar’s next directorial Takht, scheduled for a 2020 release, and Abhishek Chaubey’s Sonchiriya in 2019. “I have been fortunate to be a part of enriching films; it has changed my approach to acting,” she says.

As someone who has earned a reputation for enacting unconventional parts with sensitivity, Pednekar yearns for roles with strong characters, and films with fresh content. “I am consciously making this choice. I am lucky that from the beginning of my career, I had a choice. It is tough for actors to have that,” she says. That helps her turn down films that may look like blockbusters, but don’t appeal to her. Click here for the full Tycoons of Tomorrow list
“It takes a lot of courage to say no, but the power to say no is a big power you have." Her biggest learning has been that destiny will offer what it has to, provided you work hard. And she goes by her strength—gut instinct. While the slow and steady approach has yielded results so far, she is ready to switch gears in 2019. “Next year the speed will be a lot more than what it was in the last two years,” says Pednekar. “I want to try and be different with each film.”