Hope floats, but Modi's job of reviving the economy won't be easy

Inflation will remain elevated and RBI’s stance will remain hawkish in the immediate context; growth will improve to 6.5% by FY16, says Goldman Sachs 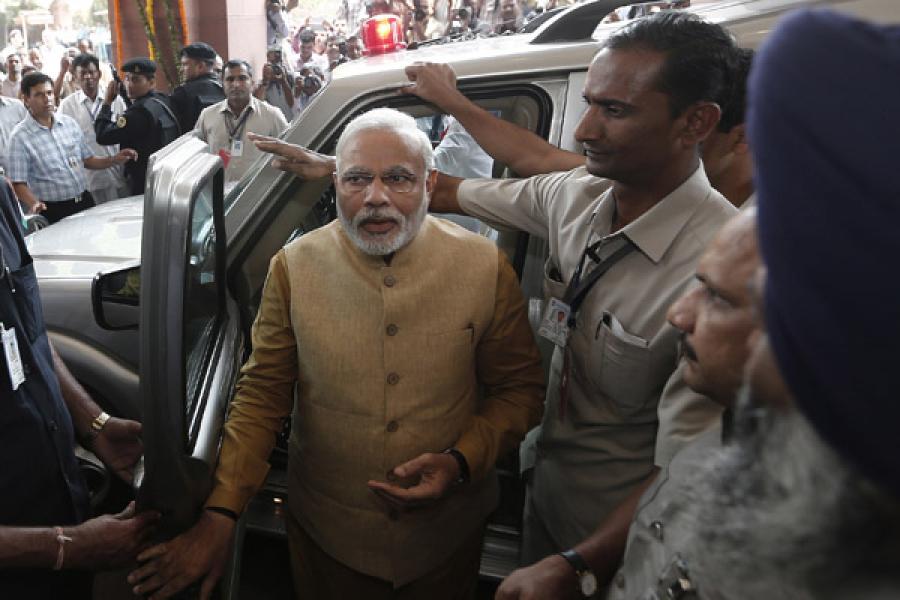 As Narendra Modi readies to put in place his cabinet, the markets continue to surge in the hope of a quick return to the growth path and a revival of the reform agenda. The 30-share S&P BSE Sensex gained another 300-plus points on May 23, the last trading session before Modi is sworn in as the next Prime Minister of India. The message from the market is this: Now that a Modi government is finally in place, the next phase will be all about reform and getting investment activity back on the rails.

Modi, whose Gujarat model was showcased as a success by the BJP in the run-up to his landslide victory, will now have to get down to the nitty gritty of economic decision-making, and, by all accounts, it won’t be a cakewalk for the new PM. While the to-do list is pretty obvious and has been discussed by several experts and by Corporate India, implementation will be an altogether different challenge.

Take for instance, the immediate problem of inflation, one most BJP watchers reckon will occupy top-of-mind for the Modi administration. Experts warn that inflationary pressures will remain elevated in the immediate context for a host of reasons before they soften some time around FY16.

A report put out by Goldman Sachs, titled “India: Hope in the air” says this unequivocally. The report says that inflation will remain elevated in FY15 before “coming off gradually in FY16.”

“There are incipient risks of a less-than normal monsoon, which is crucial for the

summer crop. Global weather bureaus, such as the Australian met office are forecasting a high probability of El-Nino like conditions in the southern Pacific. Historical data suggest a 90 percent probability of less than normal rainfall in years when El-Nino conditions develop. We assume a rain deficit of 5-10 percent in our baseline scenario which is based on the official forecasts by the Indian Metrological Department. Our analysis shows that this can increase food prices by 110 bps, and add 50 bps to headline CPI inflation in FY15,” the Goldman report points out, adding that the firm’s forecast for consumer price inflation (CPI) is 8 percent for FY15. “We see inflationary pressures easing somewhat in FY16, in part due to tighter monetary policy and declining inflationary expectations, and in part due to some fiscal consolidation by the new government. Our FY16 headline CPI forecast remains at 7 percent.”

The immediate fallout of elevated inflationary expectations means a hawkish Reserve Bank of India (RBI), the monetary authority already in the middle of some debate in connection with the new government. RBI, which is to unveil its next monetary policy review on June 3, is expected to keep a close watch on the inflationary trends, with CPI being the primary index it will watch. Goldman Sachs, for instance, reckons the RBI will raise policy rates by 50 basis points in the second half of 2014.

“The RBI has de facto moved to an inflation target with a ‘glide path’ of 8 percent by January 2015, and 6 percent by January 2016. To buttress credibility, we think the RBI is more likely to hike again than remain on hold. If a poor monsoon puts upward pressures on food prices, then that would strengthen the case for the RBI to act to reduce inflationary expectations and prevent second round effects,” the report says. In case the RBI hikes rates on June 3 itself, that may not be great news for Corporate India which is currently in celebration mode after the election results.

Inflation, however, isn’t the only problem Modi and his new finance minister will have to grapple with. The fiscal deficit will continue to pose a major challenge owing to the fact that subsidy payments have been postponed and revenues have not grown according to plan. How the new administration deals with fiscal consolidation will be a key factor which will determine its success on the economic front. Not just foreign and domestic investors, even the RBI will be keenly watching the progress on this front.

On growth, however, there are some obvious things to do. And this is where analysts and Corporate India are most bullish, and rightly so. The immediate task is to push through investments by fast-tracking pending projects. One of the few things the last UPA government actually did in its final months in power was to clear a number of pending projects and those should begin coming on stream and adding to investment demand and, consequently, boost the growth momentum. The new government, on its part, will have to remove the structural and supply-side bottlenecks further and aid the investment climate. By Goldman’s estimate, for instance, even factoring in a less than normal monsoon, GDP growth in FY15 could touch 5.5 percent, and increase to 6.5 percent the next fiscal.

For now, as the BJP-led NDA government readies its economic policymaking machinery, all eyes will be on how the Modi government tackles the immediate challenges before the economy is gradually put back on the growth path. If the immediate turbulence is negotiated well, the rest should fall in place. The markets will be watching closely. And Budget 2014 will provide the first major clues to what the Narendra Modi gameplan will look like.

6,222
Thank you for your comment, we value your opinion and the time you took to write to us!