For his family, coffee was a bean to be grown. But for Siddhartha, it has always been an experience to be offered. The rest, as they say, is history

"Where were you on New Year’s Eve, Siddhartha,” I asked the boyishly handsome man who serves a million cups of coffee a day, as he sat down in my study.

“I was in Calcutta,” he said. An unusual place for the man from Chikmagalur whose money could buy him a holiday in Bali, Big Island, New York or someplace on the French Riviera. Why Calcutta? Turned out that he prays at the Dakshineswar Temple. For two generations, the family has believed in the Ramkrishna Mission order.


But he wasn’t at the temple until the morning of the New Year. He was actually at the Café Coffee Day (CCD) outlet near Calcutta’s Woodburn Street. “How could I be partying while 10,000 of my own people were working that night? I decided to join them and the only job I could do well in an outlet was not that of the manager but of the server at the table.”

So there he was, wearing the CCD uniform, all the way from the 31st evening until close to 3 a.m. of the New Year; running in and out, cleaning tables, greeting unsuspecting customers, seating them, taking their orders, serving the frothy cups and settling their cheques. 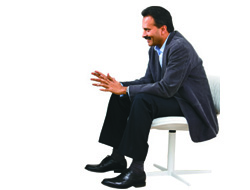 Image: Mallikarjun Katakol for Forbes India
The Self Made Man: VG Siddhartha in conversation with Subroto Bagchi

What was the biggest lesson for him in all this?
“I was simply amazed how indifferent people are to those who serve. Three rich women came, ordered their drinks, did not once look at me, and settled the cheque, did not care to tip me, but worse, did not say a ‘thank you’ before leaving for someplace else where revelry awaited them. It shocked me because it was New Year’s Eve. I thought people would be nice to others because they themselves were in such a joyous state of mind.”

It was time to change the subject. I wanted to know about his beginnings. “Tell me how you started your life.”
“I was just 21. I told my father that I wanted to learn about financial investing. That I wanted to start something on my own. Ancestrally, we are farmers — we have only grown coffee in Chikmagalur. My father did not quite see where I was heading. Left to the family, making money was not a priority: 350 acres of coffee gave us enough annuity — you could make 10 lakh a year growing coffee.”
He paused. “My father really had two sons — myself and a cousin. My uncle, a doctorate in mathematics from Zurich had died young, his son was my age. While he wanted to be a wildlife photographer, I wanted to go to Bombay to know what the investment world was like, make money on my own. So, father called us both and gave us Rs. 5 lakh each. He told me that I could start my investment business with that and if I ever failed, to come back.”
“You put that money to stock market?”
“No. I thought I should not do two things: Invest even before I learnt the world of investing. Second, put my father’s grant to risk. So, I bought a piece of land for about three lakh and kept the rest in a bank. Then, I took a bus to Belgaum and then another to Bombay. I got off near the Fort. I had never stepped into the city before. I walked into a dabba hotel that rented rooms with a shared toilet for Rs. 120 a day. Next day, I went to meet Mahendra Kampani of JM Financials — I had only heard the name. I had no appointment. I went to his office and the first thing was that I felt intimidated by the two elevators. I had never taken an elevator in my life. So, I climbed up the six floors. I met his secretary, a man named Mohan. I told him that I wanted to meet Mahendra Kampani; that I wanted to work with him. Mohan was a Bangalore guy. The man somehow felt sympathetic. He said that I could gatecrash just when he would be coming out of Mahendra Bhai’s room. I did exactly that. Mahendra Bhai was perplexed with me. He asked me who I was. I told him that I had come all the way from Bangalore and I wanted to work for him. He made me sit down; he fetched me a glass of water. I had never seen an office as large as his. Then he spoke to me, he called someone to show me the research department and asked me to come back at 3 p.m. to see him again.”

Siddhartha paused. He was in a trance.

“I met him at 3 p.m. He said he would take me in but he had no idea who I was. He asked me to get him at least a letter of introduction. That is how it all started."
“Then what happened, Siddhartha?”
“I spent all my waking hours to learn about the trade. Every single day, I showed up at 7 a.m. at the office and Mahendra Bhai and I were invariably the last to leave well past nine in the night. I would tell the office boys to pack up and it was I who took Mahendra Bhai’s dabba to load it in his car as the last item of work. In the process, he taught me all about the world of investing. He trusted me. He let me handle the accounts of some really big business houses. After a year-and-a-half with him, I was ready to come back to start on my own. I told Mahendra Bhai that. I told him how grateful I was to him, what a lot I owed him.”
“What did he say to that?”
“Oh, he told me that the Universe is connected in a web of timeless relationships. He had merely paid me back for past debt of a previous life — that I owed him nothing.”

So, Siddhartha returned and even though he bought over a stock trading firm called Sivan Securities (later renamed Global Technology Ventures), he really put his heart and soul into the coffee business. He bought out estate after failing estate in the wake of unviable coffee pricing and poor margins dictated by an international cartel. Then one day he decided to be his own master. He realised that the real value addition was in converting the beans into the coffee drinking experience and the rest is history.
I look at the man across the table. With 10,000 acres of coffee under cultivation, today, he is India’s No.1 exporter. Shorn of personal glamour, he looks like someone you would notice, only briefly, ahead of yourself in the airport security queue. In a world busy with the idea of success and failure, Siddhartha is a picture of equanimity.

I look at him one more time and think to myself: Probably it is in the name!

Get the latest stories, videos, and podcasts from Forbes India directly in your inbox every Saturday
Thank you for your comment, we value your opinion and the time you took to write to us!
Comments 13