"Last November, Venkateswarnan was the recipient of the Bengaluru-based Ranga Shankara Theatre's annual national prize—The Shankar Nag Theatre Award—given to a "theatre all-rounder below the age of 40"" 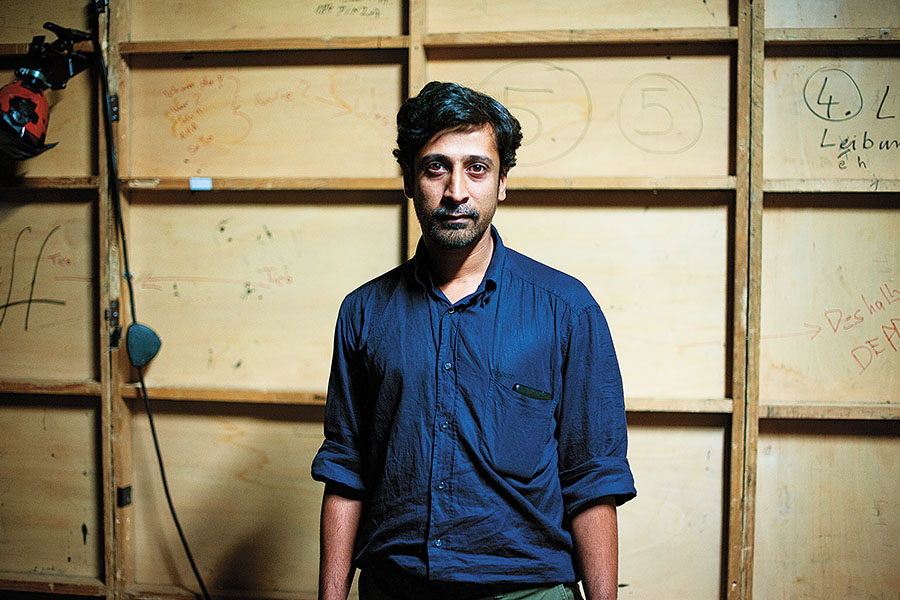 Recent years have seen the mellowing of director Sankar Venkateswaran into a theatre maker with a strong social conscience, whose commitment to offbeat experimentation remains unshaken. Last November, he was the recipient of the Bengaluru-based Ranga Shankara Theatre’s annual national prize—The Shankar Nag Theatre Award—given to a “theatre all-rounder below the age of 40”. Venkateswaran, 41 now, is a veritable veteran of the stage, an accomplishment he wears lightly even after two decades in the performing arts.

In the mid-1990s, Venkateswaran’s tryst with theatre began in obsessive fashion. The collegiate circuit, with its frenzied one-act competitions, took such a toll on his curriculum that he couldn’t meet attendance criteria for the physics course at St Joseph’s College, Devagiri, in Kerala’s Kozhikode district. Having tasted blood on stage while at college, he enrolled at the University of Calicut’s esteemed School of Drama and Fine Arts in Thrissur. There, the emphasis on rigour and practice, as well as renewed scrutiny of traditional forms like Kathakali or Kalaripayattu, instilled in him the discipline and priming that allowed him to move away from a tried-and-tested canon to the immediacy of devised collaborative work.

For Venkateswaran, the school clarified the role of a director: “[Is the director] just an image-maker, or a manager, or someone translating a world from the page to the stage, or simply an actor-trainer? When does the director emerge as a creative contributor in the ensemble?” He graduated in 2001, but soon realised the limitations of specialised pedagogy. “Even as a trained director, I could only work with those who had emerged from a training similar to mine,” he remembers. This conflict led him to the Intercultural Theatre Institute in Singapore in 2003, where he decided to undergo training as a performer. “I wanted to have a first-person perspective of the actor, which I felt was lacking in my craft,” he explains.

In 2006, after a stint as an actor and percussionist in director Abhilash Pillai’s segment of the international trilogy Performing Women, Venkateswaran swiftly moved back to directing and, under the aegis of his newly formed group Theatre Roots and Wings (Theatreraw), emerged with what are now considered his breakout works—Richard Murphet’s frenetic physical play Quick Death (2007), and Sahyande Makan—The Elephant Project (2008), a theatrical interpretation of Vyloppilli Sreedhara Menon’s visually evocative poem.

Quick Death was mounted in Delhi and Kerala, supported by the India Foundation for the Arts. “It allowed me to explore natural bodies as a powerful and expressive tool that allows actors to become autonomous and interpretative,” he says. But, disillusioned by the work taking place around him, Venkateswaran realised his métier lay in creating theatre that came from “within himself”. Sahyande Makan was his first masterpiece, albeit one that left him “bankrupt”. It was performed by the Japanese actor Micari. Sans dialogue, she powerfully evoked the inner perturbations of a bull elephant’s mind, before it is shot to death.

Without a fixed address, his group moved from one makeshift arrangement to another in Thrissur, before seeking out an isolated space in remote Attapadi in the Palakkad district, where Sahyande Makan could be developed much more cost-effectively. It was a creatively challenging project, but having to wear the producer’s hat as well proved an uphill task for the young director. “It became very strenuous, and thankless even, which is why I’ve stopped single-handedly stage-managing my own projects,” he says. 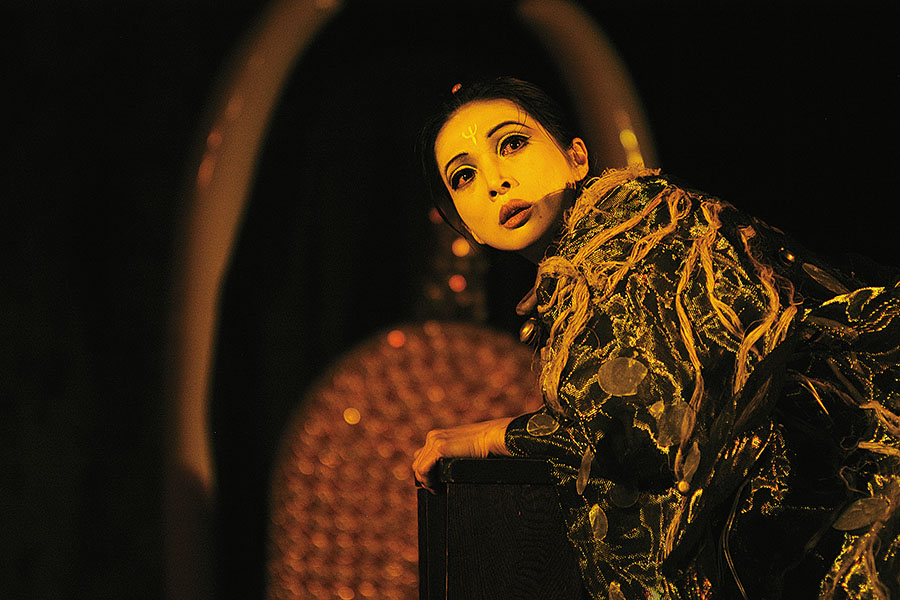 (From left) A still from Sahyande Makan
Image: Thyagarajan

Venkateswaran’s pan-Indian production of visionary Japanese director Shogo Ohta’s The Water Station, supported by the Japan Foundation, catapulted him into national attention in 2011. In the play, a scattered cavalcade of migrants arrive at a public water faucet for replenishment. Their progress takes place in inexorable slow motion, each flicker of emotion acquiring the gravitas of a full-blown tale. Ohta’s breathtakingly wordless masterwork, popular beyond Japan, is written as an elegiac movement score.

Venkateswaran’s ensemble evokes its illusions and transformations without the loss of any detail. The play’s tapestry of rich, transfixing images frozen in time utilises a culturally non-specific vocabulary while commenting on global displacements; it is a production where the director has fielded the charge of showcasing a ‘universal’ experience rather than a rooted one. “I am not interested in the hybridisation of culture. I try to rip away at what is Malayali or Japanese, and arrive at something that is human and essential,” he had said then.

Coinciding with Venkateswaran’s ascendance as a director of note in Kerala was the growing profile of the International Theatre Festival of Kerala (ITFoK), founded in 2008. He has exhibited his works at the event, served on advisory panels, presented talks, and worked as a technical director, before assuming the mantle of ITFoK’s artistic director on back-to-back years from 2015. “One thing we introduced was the idea of ticketing, which ensures people from all walks of life are given access rather than a privileged few,” he says. 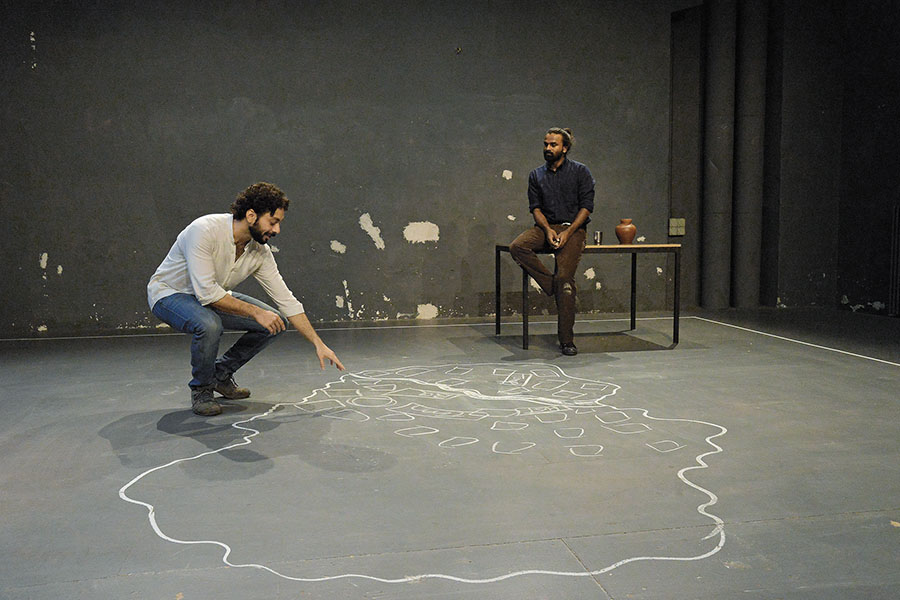 
The cross-pollination effected by ITFoK’s bringing together of international and national theatre makers on a single stage enriched Venkateswaran’s own practice, “The sharing of inspiration and fire and sense of purpose is always important, and the works of groups like Beirut’s Zoukak Theatre Collective have been particularly resonant in Kerala,” he says.

Theatreraw moved base to Attapadi in 2010, to “a patch of untilled land with a dilapidated hut”, away from the distracting trappings of civilisation, and this developed into a self-sufficient retreat. But notwithstanding the tranquility and freedom the space afforded to artistic exploration, Venkateswaran soon realised that, as a settler, he couldn’t remain inured to the realities of the region’s tribal populace.

In 2013, he was awarded Norway’s prestigious (and lucrative) International Ibsen Scholarship, to evolve adaptations of Henrik Ibsen’s works with local indigenous communities in off-the-map tribal hamlets like Thadikkundu and Anavaayi. Dubbed the Tribal Ibsen Project, it allowed him to merge his creative practice with its natural setting, creating an interface between Ibsen’s seminal ‘verse plays’ like Brand and Peer Gynt, and the unrecorded memories of tribal ‘songs and lines’.

His engagement with locals, under the aegis of Sahyande Theatre, became more about the process, than the creative artefact. One activity was to painstakingly recreate a long-forgotten folk piece, the Madurai Veeran Koothu, in which a Dalit man marries an upper-caste woman. “It took us months to piece together a work that existed only in the memories of a few people,” he says. 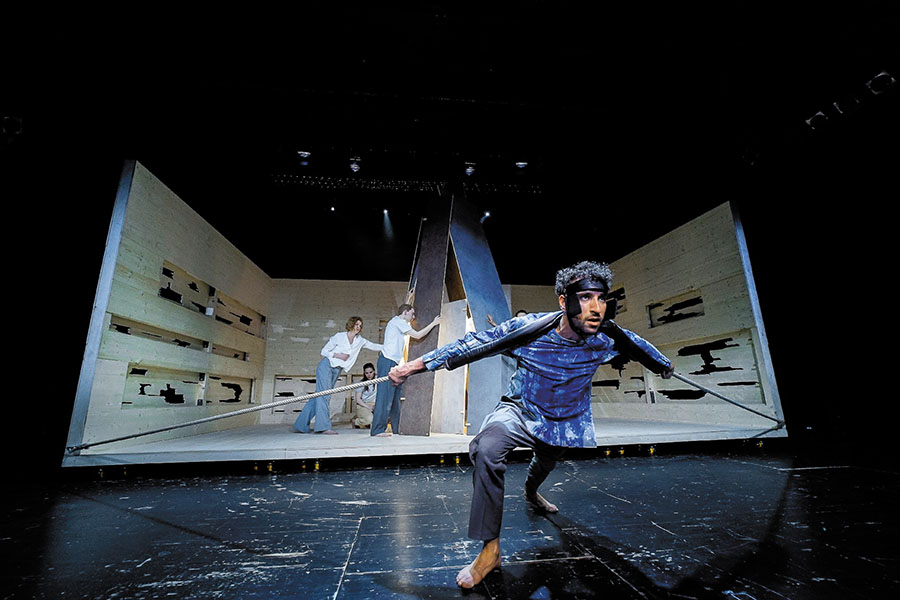 Indika, a play that opened in Munich in 2017, deals with the brutal expansion of the Maurya empire under Chandragu-pta and its pacifist aftermath
Image: Arno Declair


It disarmingly brought together elements of rituals and trance and recitation, and even a procession. “It was theatre in a much wider context than I was used to, embedded in a community with its own viewing culture,” says Venkateswaran.

Another work that has emerged from these moorings is Criminal Tribes Act, a two-hander (a theatrical performance with two actors) featuring Anirudh Nair and Chandra Ninasam (Chandru), commissioned by the Zürcher Theater Spektakel. It is a juxtaposition of two actors from disparate backgrounds— Chandru is Dalit while Nair is an upper-caste Hindu. Staged in venues across India, it is a piece in which Chandru’s history of social exclusion is juxtaposed against Nair’s privilege, even as the piece struggles with its intersectional gaze.

Even if primarily ensconced in the Kerala outback, Venkateswaran’s oeuvre has recently received an international fillip with two back-to-back productions at the Münchner Volkstheater in Germany. In 2016, he staged Tage der Dunkelheit (‘Days of Darkness’), a German version of Bhāsa’s Urubhangam, based on the final moments of the Battle of Kurukshetra, utilising his trademark commitment to stillness and the reinforced composure of each lived moment. Reviewers highlighted that Gandhari’s (portrayed by Magdalena Wiedenhofer) “tension captures the whole space” as she glides down the battlefield almost “like an optical illusion”. In 2017, Venkateswaran opened Indika in Munich. Dealing with the brutal expansion of the Maurya empire of 300 BC under Chandragupta and its pacifist aftermath, the play was a political allegory and once again made use of measured movement and an unsettling silence.

Ran Chai Bar-zvi’s production design involved a large wooden strongbox hacked into splinters and gathered into an eccentric assemblage, even as a chastened Chandragupta (portrayed by Mehmet Sözer) hauled the contraption—a symbol of  new progressive governance—forward. Working in a German state-run theatre that is more than a century old, with a 60-strong repertory and 200-odd employees, was a sea change from Venkateswaran’s own amorphous theatre practices. “It exposed me to systems of huge magnitude. I had the luxury of unconstrained rehearsals, with complete technical support,” he recalls.

His next project is Indian Rope Trick, with Nair, Chandru, and classically-trained dancer Sanjukta Wagh; it premieres at the Kyoto Art Theater Shunjuza in February. “The rope is a potent metaphor for how stories are being used to control people’s lives,” says the director. The title might be an Orientalist misnomer in subversion, but the play’s unmistakable political undertones and collaborative ethos are once again suggestive of a theatre maker with a grand design.