Investors hung their hats on Peloton and Zoom last year. What now?

Many investors are shifting their attention to corners of the market they considered no-go zones last year, with businesses including airlines, live events companies and commercial real estate firms posting large gains 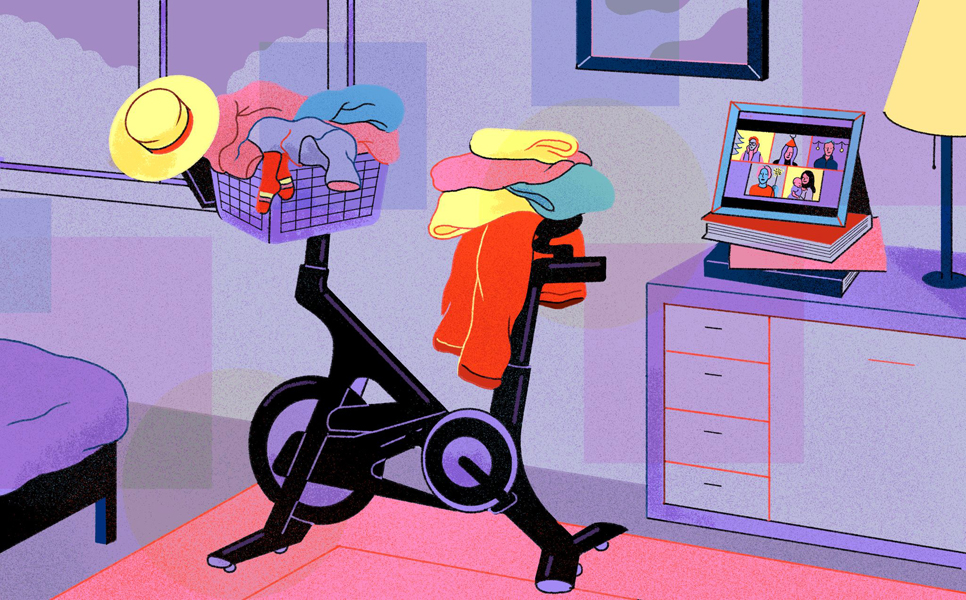 Shares of companies like Peloton and Zoom Video were darlings of the stock market for the better part of last year. But as the economic reopening gains speed, some of the stocks at the center of the so-called stay-at-home trade collapsed. (Ana Galvañ/The New York Times)

Peloton’s pricey exercise bikes were the hot product for fitness buffs in the early days of the pandemic. With jumbo screens and upbeat instructors, being on them mimicked the experience of an in-person spin class in their living rooms.

What happens now that they can get the real thing again?

Shares of companies like Peloton and Zoom Video, the online conference software that replaced face-to-face communications for countless schools and businesses, were darlings of the stock market for the better part of last year. But as the economic reopening gains speed — aided by rising vaccination numbers and promising new treatments for those who get sick — some of the stocks at the center of the so-called stay-at-home trade collapsed.

“The markets clearly sense the pandemic is over,” said Ben Emons, managing director of global macro strategy for Medley Global Advisors. “We’re in a full reopening and we’re moving toward a normalized situation.”

That has been bad news for the share prices of some of last year’s hottest stocks. Peloton dived 35% in a single trading session this month, after it deeply cut its sales forecast for the coming year. CEO John Foley said on a conference call with analysts that the company knew it would be a challenge to duplicate the results it had during the peak of the pandemic. But he added, “Our long-term thesis of fitness moving into the home is unchanged.”

Peloton’s shares tumbled 6.8% Wednesday, a day after they jumped 15.5% as the company undertook a $1 billion stock offering. Its shares are down nearly 66% for the year.

Other once-hot stocks have also skidded. Shares of the online education company Chegg plunged almost 50% in a single trading session Nov. 2, and are off 68% in 2021. Zoom Video plummeted 17% on a single day in late August, after it noted that strong demand for its products showed signs of easing as the pandemic abated. So far this year, it is down nearly 22%.

Instead, many investors are shifting their attention to corners of the market they considered no-go zones last year, with businesses including airlines, live events companies and commercial real estate firms posting large gains.

The turn away from stay-at-home stocks has not sapped the market’s overall momentum. The S&P 500 closed down 0.3% Wednesday but is up nearly 25% this year. After the index’s head-spinning recovery last year, and a nearly 29% gain in 2019, stocks are on track for the best three-year run since the late 1990s.

Investors owe the bulk of the market’s gain this year to so-called cyclical stocks, such as oil companies and financial firms, whose profits and share prices tend to mirror the trajectory of the economy, rising and falling as growth quickens or slows.

It is a stark switch from the kinds of stocks that were at the epicenter of last year’s remarkable rise — and a huge surge in trading.

As lockdowns forced much of the country to stay home — often with ample extra money from government stimulus and little else to do — millions of neophytes tried their hand at trading stocks. Many of them bought shares in the products they were being exposed to for the first time, like Peloton, or those they were using more frequently, like Clorox. The logic was fairly straightforward: As the economy went through one of the worst economic shocks on record, these companies seemed like they would be able to grow profitably through, and perhaps because of, the crisis.

“The stay-at-home stocks were the place to be because that was where the growth was,” said Eric Mintz, portfolio manager at Eagle Asset Management, an investment firm in St. Petersburg, Florida.

It was a disparate group of stocks: Shares of Zoom Video were up nearly 400% last year while Peloton rose about 470%.

Online retailer Etsy, which suddenly became a key source of homemade masks, jumped 300%. And internet furniture store Wayfair rose 150% as people nestled down and spruced up their homes.

At the end of last year, one of the funds Mintz co-manages — the roughly $9 billion Carillon Eagle Mid Cap Growth Fund — owned sizable stakes in one of those stocks, a slug of Peloton shares worth roughly $136 million.

But in the first half of 2021, the fund sold out of that position and has built stakes in companies that are tied to infrastructure spending, home improvement and health care, and that Mintz thinks offer strong potential for growth over the near term.

“When you’ve got this surge in reopenings, obviously you’ve got a number of companies doing very well, and industries,” he said, adding that as the economy improves, growth-focused investors do not need to crowd into “just a handful of stocks.”

Not every company that surged over the past 20 months has come back to earth.

Etsy, for example, is up roughly 60% in 2021, as the company has been successful at converting those who went to the site for face coverings into repeat customers. And the online security company Zscaler — which soared more than 300% last year — has only continued to climb, rising almost 80% so far this year.

But the pandemic darlings are not finished, even if their most explosive growth has petered out. Some investors believe that nearly two years of stay-at-home life have so altered our behaviors that companies like Peloton and Zoom Video will remain part of our daily routines for the foreseeable future.