Is it time for markets to settle down?

A sharp run up over the last 18 months may have priced in too much; Indian indices have been trading at far above historical valuations, with the Sensex and Nifty commanding a 24x multiple based on expected March 2022 earnings 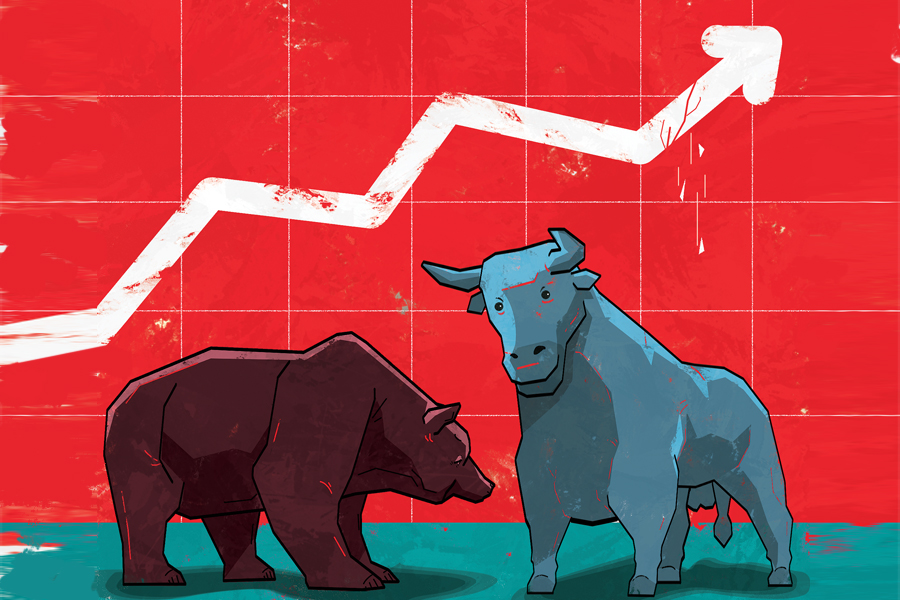 Indian indices trading at far above historical valuations, with the Sensex and Nifty commanding a 24x multiple based on expected March 2022 earnings
Image: Chaitanya Dinesh Surpur

A sharp run up over the last 18 months may have priced in too much When Indian markets registered their first bounceback post the March 2020 dip, investors voiced a fair amount of caution. After all, Covid-19 cases were still climbing, business activity was low and balance sheets, both corporate and personal, had been broken.

But, as the rally matured, those voices were consistently proven wrong. Globally, there was $25 trillion of new money sloshing around and some of it found its way to the Indian market. The result: More and more participants being sucked in at ever increasing valuations.

The net result has been Indian indices trading at far above historical valuations, with the Sensex and Nifty commanding a 24x multiple based on expected March 2022 earnings. Over the last three months, global brokerages, with JP Morgan being the latest, have downgraded Indian stocks primarily based on the lofty valuations they trade at. A recent sell-off in the mid and small cap indices suggests that it may finally become time to get more cautious.

“Given the sharp run up we have had, there is a possibility that the markets may move sideways for some time,” says Amit Khurana, head of equities at Dolat Capital. But, at the same time, he sees a healthy rotation among stocks and sectors that may keep any fall in check. So, when information technology companies do well, banking takes a back seat, and then metals do well and consumer goods companies take a back seat. That way, while individual sectors may correct, the indices are held up.

In addition to the sharp rise in valuations, there are several global factors that may warrant caution. The first is the slowing of bond purchases by both the US and European central banks. While the Federal Reserve has indicated an announcement in November, the European Central Bank has not indicated a timeline. For now, the prevailing view is that rates will rise slowly and won’t cause a market disruption. “I believe central banks will increase rates very slowly,” Rakesh Jhunjhunwala told Forbes India in an interview.

Second is the rise of inflation globally on account of supply disruptions. This may prompt central banks to raise rates faster than expected. At the very least, this may prompt them to reduce money supply. In India, rising oil prices have increased the risk of a spurt in inflation. 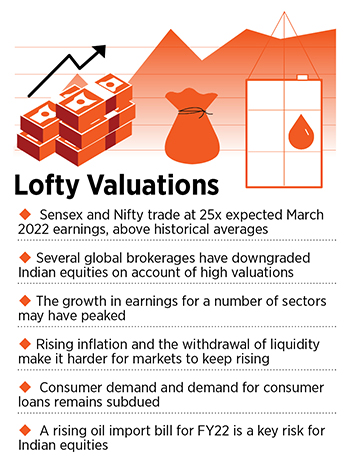 In November, the RBI will move to drain ₹200,000 crore of excess liquidity in the banking system. The news, coupled with several global brokerages downgrading Indian stocks to neutral due to excess valuations, prompted a steep one-day fall. On October 28, the Sensex fell 1,158 points or 1.89 percent to 59,984, its biggest fall since April 30.

Asian Paints reported its lowest margins in at least 50 quarters as input and freight costs hurt. Gross margins were down 970 basis points to 34.7 percent.

As input costs continue to drag, the markets also have to contend with weak consumer sentiment that drives as much as 70 percent of Sensex valuations through banks and consumer companies. Two-wheeler makers have reported weak sales due to poor demand as have car companies due to a shortage of chips.

For banks, loan growth has been tepid and the true picture on asset quality is not out yet, as restructured accounts are yet to get past the 90- and 180-day period for NPA reporting.

Over the next three years, market veterans expect the weakness in consumer companies and banks to get filled in with a host of new businesses—from metals to specialty chemicals and infrastructure to capital goods. Valuations should then move to that part of the market along with a change in the Index composition. Till then, it would be fair to expect investors to be nervous about deploying money at these lofty valuations.