India's 100 richest: There's a party at the top

India's richest business families saw gains in wealth in the past year. The cheer is likely to continue with a gradual normalisation of demand and spending, and a sustained economic revival in sight

The soaring stock markets pushed up the combined wealth of business families on the Forbes India Rich List 2021 to a record $775 billion
Illustration: Chaitanya Dinesh Surpur

The soaring stock markets—now at lifetime highs—pushed up the combined wealth of business families on the Forbes India Rich List 2021 to a record $775 billion, an over 50 percent jump from $518 billion a year earlier.

This came as the Indian economy and stocks have recovered from two pandemic waves, the first in September last year and the second this May. A sustained vaccination drive, which has seen 1 billion Indians get vaccinated, has led to a lowering in severity of cases. The unlocking of business and trade by state governments is leading to a normalisation of demand and spending.

Vaccine manufacturer Cyrus Poonawalla, who has founded the unlisted Serum Institute of India, broke into the top five after it launched the Covid-19 vaccine Covishield, developed along with AstraZeneca and Oxford University in the UK.

The rest of the billionaires have seen a jump in their wealth as pharmaceutical, health care and diagnostic laboratory businesses grew during the pandemic. IT and technology-enabled companies, such as HCL Technologies and Wipro, witnessed rapid gains in business and fortunes.

Besides, the booming specialty chemicals industry led to the entry of three newcomers on the list: Ashok Boob of Clean Science and Technology, Deepak Mehta of Deepak Nitrite, and Yogesh Kothari of Alkyl Amines Chemicals.

The demand for specialty chemicals is likely to continue in the coming years, with Indian businesses planning for higher manufacturing capacity build-up in India to capitalise on the problems Chinese makers are facing due to stringent local environmental laws. While valuations for specialty chemicals continue to look stretched, growth will continue. From a stocks perspective, “valuations will not correct too much if earnings growth follows through”, says Samit Vartak, founder and chief investment officer of fund house SageOne Investment Managers, which caters to high income individuals.

Construction, building materials, real estate and export-oriented businesses are also likely to expand in coming months. “Inventory levels in housing is among their lowest and prices are sluggish, which will all start to change as demand continues to improve,” Vartak tells Forbes India. The need for larger and second homes is a real need for several families in the pandemic world. 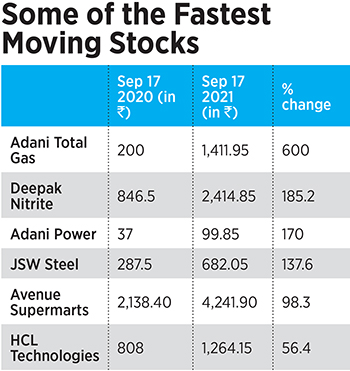 The boom in information technology and ITeS continues to keep the ‘big four’ IT firms—TCS, Infosys, HCL and Wipro—in the news. All these companies have aggressive hiring plans drawn out for the current fiscal year, having already hired over 1 lakh people combined in the first six months of FY22, due to strong demand for orders and a high attrition rate.

“IT companies are besieged to meet the rising demand,” says Gautam Duggad, head of research (institutional equities) at Motilal Oswal Financial Services. Duggad is also confident of the banking and financial services segment. Lending companies are seeing increased collection efficiency and disbursement activity in loans after a few sluggish quarters, and asset quality is unlikely to deteriorate alarmingly from current levels, analysts say.

Consumer discretionary demand is also starting to pick up and will continue to improve in the coming quarters, assuming that India manages to have more control over a possible third wave. Duggad, like Vartak, is equally confident about the demand for specialty chemicals and API-led pharma, but finds valuations stretched. “We are advising our clients to stay invested in companies with good business models, strong balance sheets and leadership positions in their respective segments,” he says. 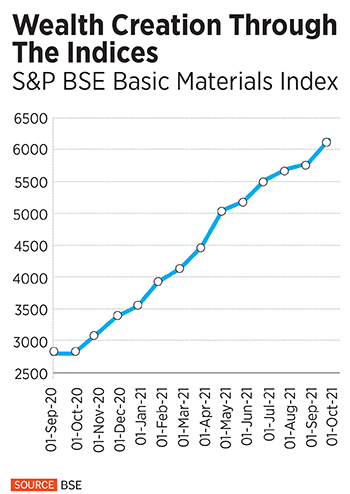 The fundamentals are starting to emerge as huge positives for India. With tight cost-focus, less leveraged balance sheets and improving cash flows, corporates are in a better position to start spending on capex. “We see fundamental drivers that will improve productivity growth and corporate profitability. Exports and private sector will now drive the recovery, while the government is withdrawing fiscal support in a counter-cyclical manner,” said Chetan Ahya, chief Asia economist for Morgan Stanley, in a note to clients in October. In particular, he believes that a “strong capex cycle will unlock the path towards a self-sustaining recovery” (see graph). This would be similar to what India witnessed in 2003-2007.The other positive is that the government, alongside, is continuing with fiscal spending on key infrastructure projects. Public and private infrastructure spending is expected to be, on an average, 6.6 percent of annual GDP in the period (see graph). As it stands, government spending (by both the Centre and the states) has accelerated to a six-year high as of August 2021 on a 12-month trailing sum basis.

Despite the stretched price valuations, which worries investors, “market crashes rarely happen just because valuation multiples are at extremes”, Vartak said. But the benchmark 30-share BSE Sensex fell 1,247.77  points or 2.04 percent to 60,967.05 on October 25, from a high of 62,214.82 on October 19. For the first time in several weeks, intra-day highs have not sustained and stocks such as HUL, Asian Paints, NTPC, L&T and Tata Steel have all come off their recent highs, as investors have locked in gains from previous weeks.

External factors such as the US Federal Reserve tapering or starting to hike interest rates again, China’s debt concerns or local inflation concerns are unlikely to cause major crashes, though corrections cannot be ruled out. The real fear would be when rate cycle starts to peak and the down cycle starts, Vartak said, but this is still “a few years away”.