More than 80 percent billionaires on the list saw their fortunes grow this year, with 61 adding $1 billion or more. There are six newcomers and eleven dropouts 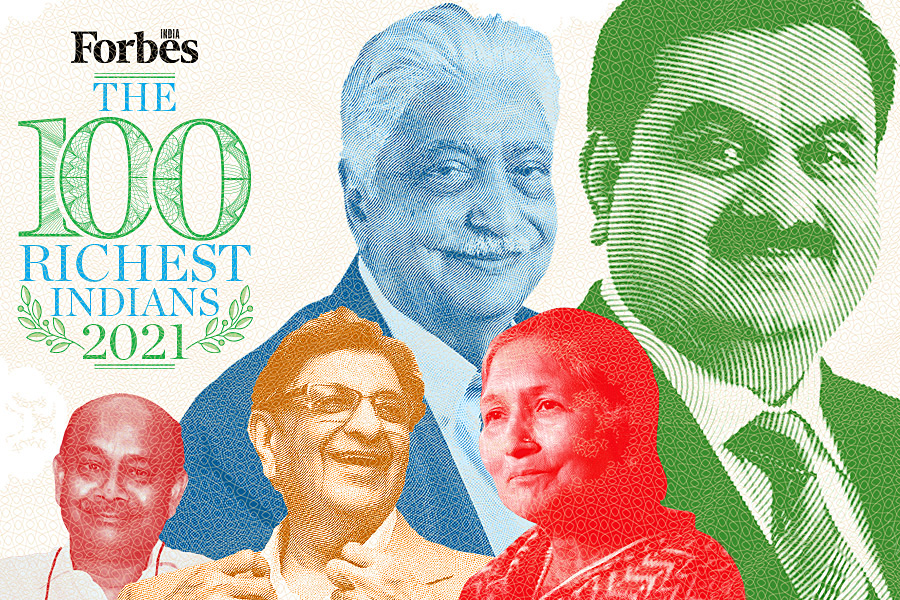 In year two of the pandemic, India's richest increased their cumulative wealth by 50 percent. Mukesh Ambani remains the wealthiest Indian for the 14th year in a row—since 2008—adding $4 billion to his net worth in 2021. Gautam Adani is now a close second with a $74.8 billion fortune, only $17.9 billion shy of Ambani. Savitri Jindal reenters the top 10 club with $18 billion. Four pharma billionaires saw their wealth erode. India’s 100 richest are now worth $775 billion.

Setting a brand new record, members of the Forbes India Rich List—The 100 Richest Indians 2021 saw their cumulative wealth increase to $775 billion, adding $257 billion—a 50 percent gain—from 2020. This comes at a time when the country is recovering from the Covid-19 pandemic which led the benchmark BSE Sensex to rise 52 percent in the year.

The top 10 richest Indians are: 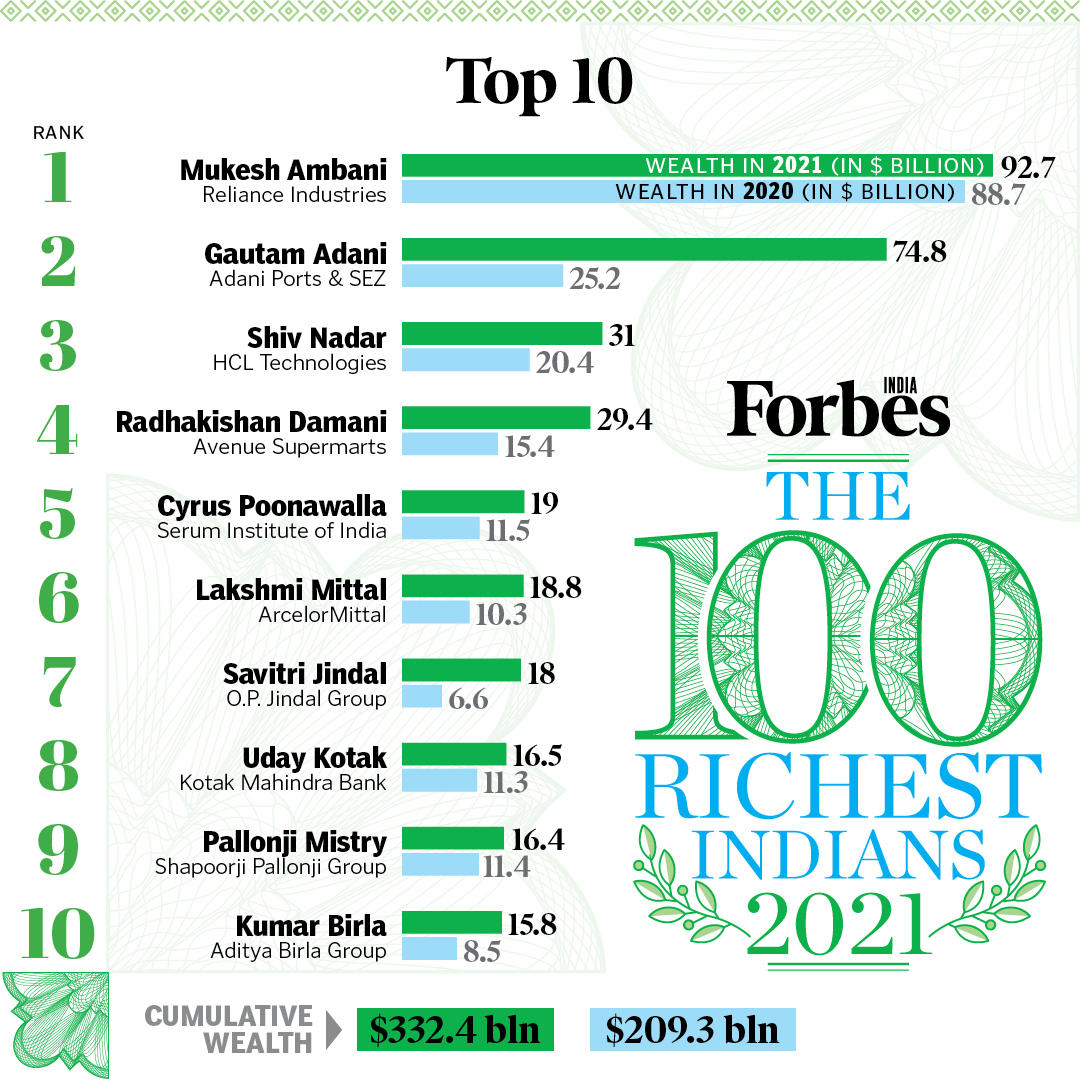 “This year's list reflects India's resilience and can-do spirit even as Covid-19 extracted a heavy toll on both lives and livelihoods. Hopes of a V-shaped recovery fueled a stock market rally that propelled the fortunes of India's wealthiest to new heights. With the minimum net worth to make the ranks approaching $2 billion, the top 100 club is getting more exclusive,” Naazneen Karmali, Asia Wealth Editor and India Editor of Forbes Asia, said.

Owing to the higher cut-off, 11 listees from last year dropped off in 2021. This year you had to be at least $1.94 or richer to make it to the list, up from $1.33 billion last year.There are six newcomers on this year’s list, with half of them hailing from the booming chemicals sector. They include Ashok Boob (rank 93; $2.3 billion) of Clean Science and Technology; Deepak Mehta (rank 97, $2.05 billion) of Deepak Nitrite, and Yogesh Kothari (rank 100, $1.94 billion) of Alkyl Amines Chemicals. Arvind Lal (rank 87, $2.55 billion), the executive chairman of diagnostics chain Dr Lal PathLabs, also debuted on the list after a pandemic-induced surge in testing caused shares of his company to double in the past year. The other two newcomers are Inder Jaisinghani of Polycab India, and Banjranglal Taparia of Supreme Industries, with a net worth of $3.6 billion and $1.95 billion, respectively. 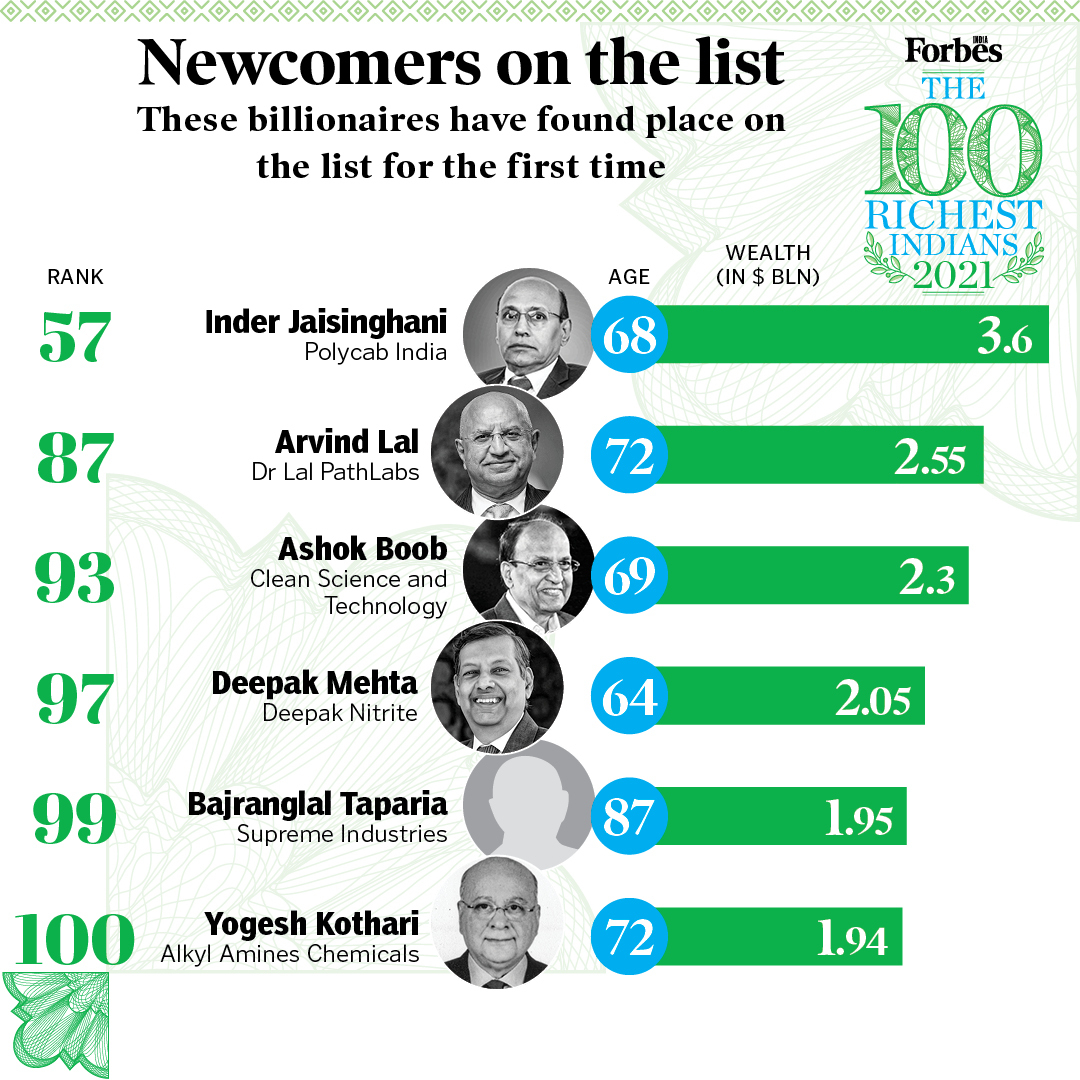 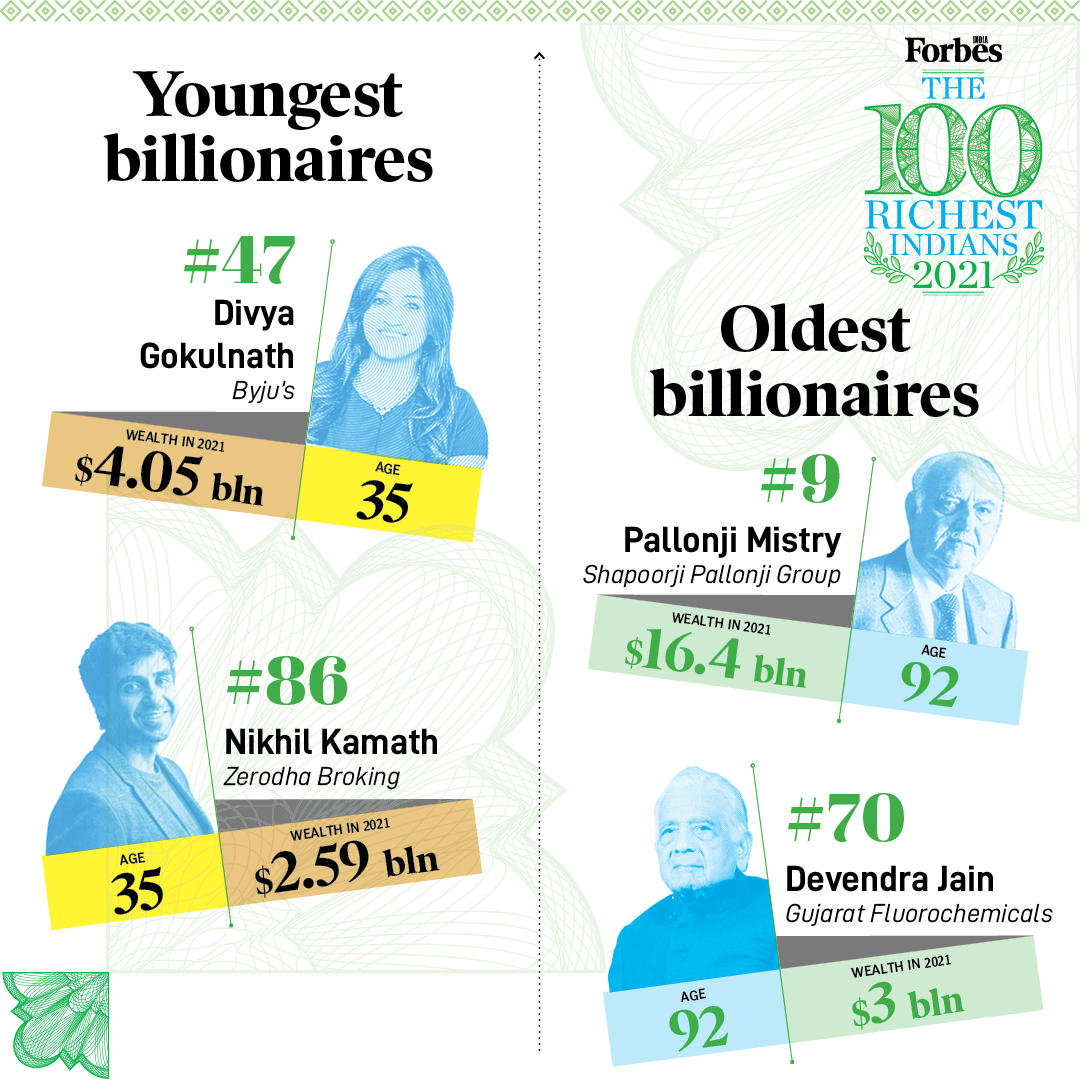 The country’s IPO rush returned property magnate and politician Mangal Prabhat Lodha (rank 42, $4.5 billion) to the list, following the April listing of his company Macrotech Developers. Among the four other returnees is Prathap Reddy (rank 88, $2.53 billion), whose listed hospital chain Apollo Hospitals Enterprise has been testing and treating Covid-19 patients. Four billionaires who lost the most wealth this year compared to last year belong to the pharmaceuticals sector—Kiran Mazumdar Shaw, who was the top gainer in percentage terms last year—saw her wealth decline $0.7 billion or 15.22% to $3.9 billion. Others from the pharma sector include P.V. Ramprasad of Aurobindo Pharma (rank 90, $2.45 billion), Gupta Family of Lupin (rank 75, $2.82 billion), and Reddy Family of Dr. Reddy’s Laboratories (rank 69, $3.01 billion)

Indian billionaires who lost most wealth: 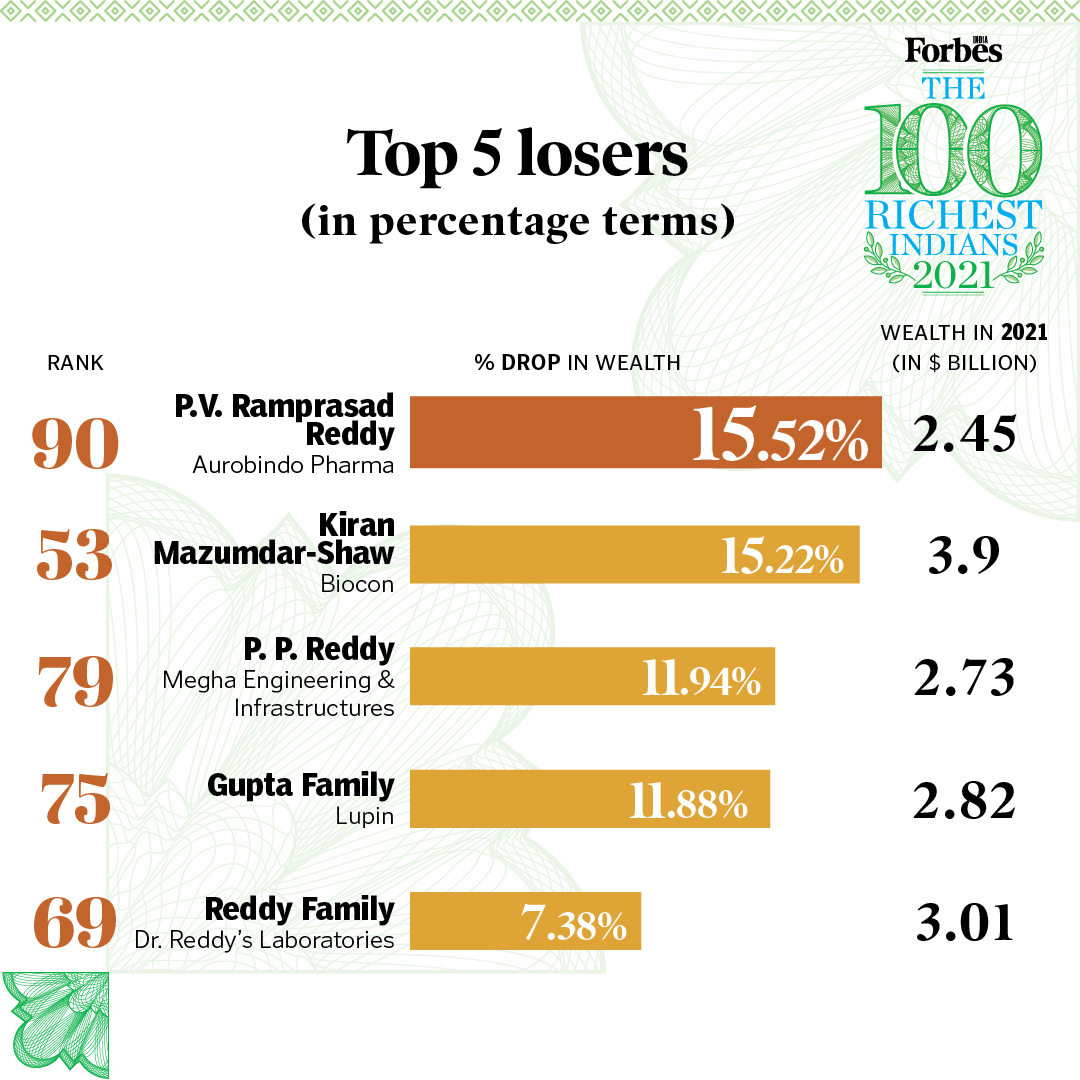 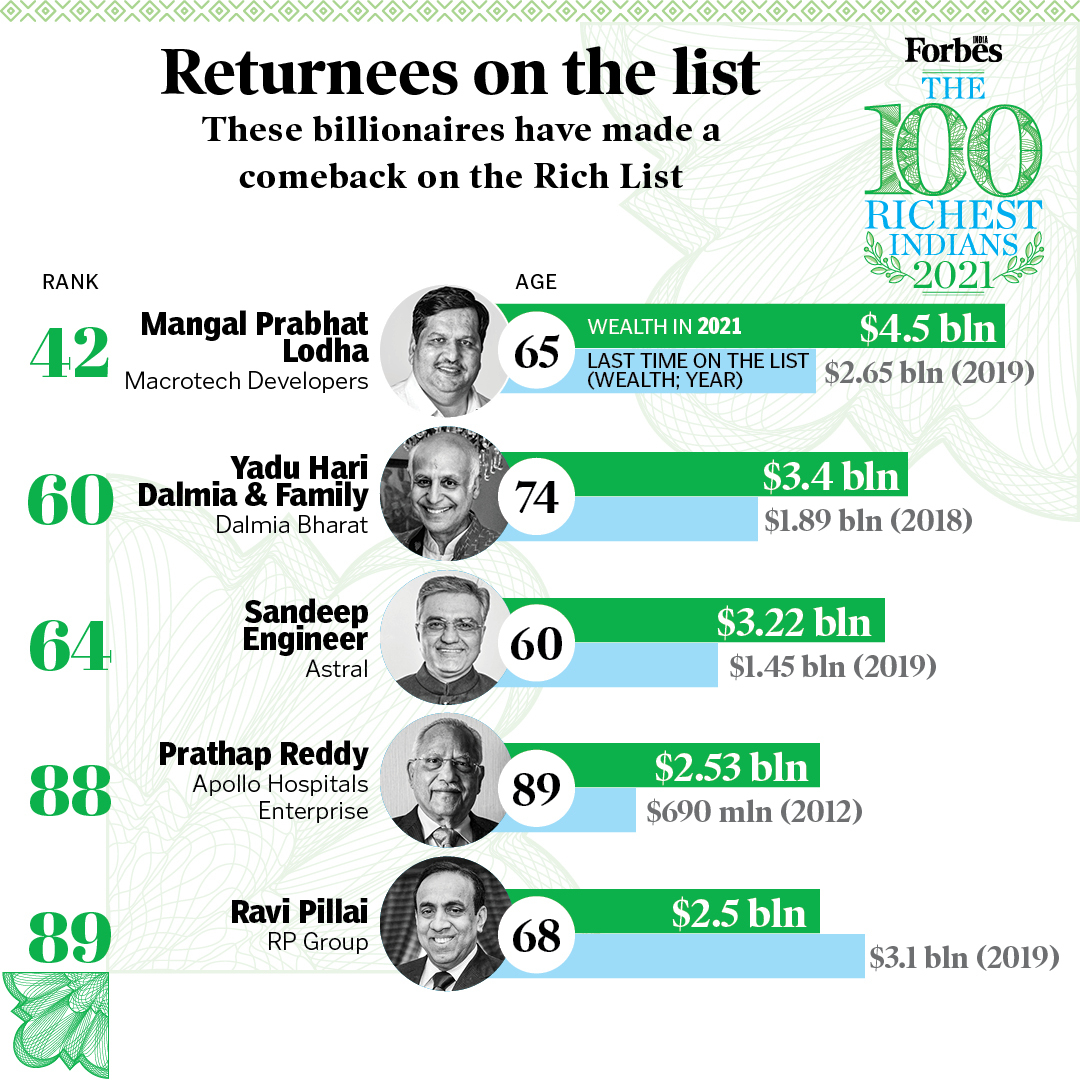 This list was compiled using shareholding and financial information obtained from the families and individuals, stock exchanges, analysts and India’s regulatory agencies. The ranking lists family fortunes, including those shared among extended families such as the Bajaj and Godrej families. Public fortunes were calculated based on stock prices and exchange rates of September 17. Private companies were valued based on similar companies that are publicly traded. The list can also include foreign citizens with business, residential or other ties to the country, or citizens who don’t reside in the country but have significant business or other ties to the country.(Reliance Industries Limited is the owner of Network18, publisher of Forbes India)