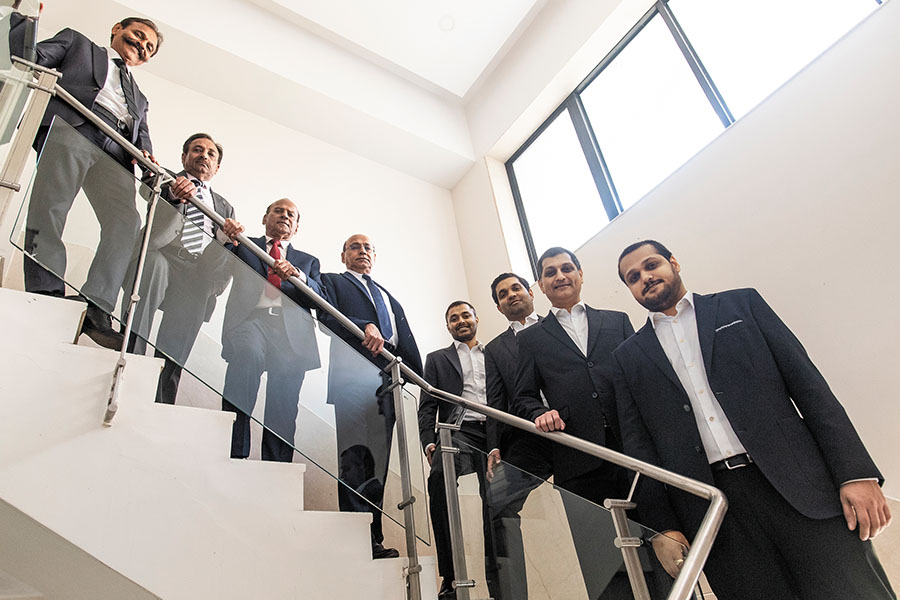 It all started with a little shop in Mumbai’s Lohar Chawl in 1964. Thakurdas Jaisinghani, who had moved to Mumbai from Pakistan after Partition, founded Sind Electric Stores in the city’s epicentre for electrical goods and sold various products, including fans, lighting, switches and wires. Four years later, Jaisinghani met with an accident and passed away, leaving his wife and five children to pick up the pieces.

His eldest son Girdhari, then 16, had just completed his schooling and instead of pursuing higher studies, he had to take over the mantle of running the shop. Inder, then 15, was also told to drop out of school and join his elder brother. Two other brothers, Ramesh and Ajay, followed suit.

The young guns learnt quickly. By 1975, they set up Thakur Industries and acquired a small piece of land from the Maharashtra Industrial Development Corporation in the Mumbai suburb of Andheri to set up a factory for manufacturing cables and wires. Eight years later, they set up another factory in Halol, Gujarat, to make and process PVC insulated wires and cables, copper and aluminium, and bare copper wire, and Polycab Industries was born.

“It was time for us to think big and differently. We had to take a leap of faith from trading towards manufacturing,” recalls Inder, chairman and managing director of Polycab India. “We had to forward and backward integrate to ensure our margins improved consistently and gave us more cash in hand. We believed in the power of manufacturing and invested in it to grow our business.”

As they continued to grow and set up more manufacturing plants, the second generation stepped in. Ramesh’s son Nikhil and Ajay’s son Bharat, both in their early 20s, joined the family business in 2006. Starting off by shadowing Inder, they underwent training and rotation in various departments from operations and purchase to finance. “It took us a few years to get the hang of everything. We were then only trying to support our chairman as much as we could since it was a family-run business and he had a lot on his shoulders,” recollects Nikhil, 34, who completed his bachelor’s in business from the University of Kent, UK.

In 2008, International Finance Corporation, the private equity arm of the World Bank, invested ₹401.75 crore in Polycab and the second generation took on bigger roles. “After this investment, our roles changed from being the export or procurement manager to change agents, where we started implementing new things in the company,” says Bharat, 35. Changes ranged from introducing Enterprise Resource Planning to hiring a professional in the family-run business.

“The period when we were executing these changes... those were literally the toughest days of our lives,” says Bharat, recalling how they had to convince the first generation to move with the times. “It took some time for the older generation to get used to the fact that the younger generation is going to say ‘Look, we are not doing things in the right manner and this needs to be corrected’,” adds Bharat, who has a master’s in operations management from Manchester Business School. “Thankfully, they trusted us.”

In 2011, Nikhil decided to pursue further studies at the Kellogg School of Management. “After I completed my MBA, I didn’t want to come back to the business. I wanted to work, so I applied and even gave a couple of final interviews... somehow the family was not convinced and there was quite a bit of resistance. So I went back to the business. But I went back at a good time because a lot of things began to change in the company,” says Nikhil, director, Polycab India.

Cut to 2014. The company diversified into Fast Moving Electrical Goods (FMEG), a sector pioneered by the late Qimat Rai Gupta, founder of Havells. The objective was to move from being a pure B2B player to a B2C one.

“As a company, we decided to increase our B2C product portfolio. We didn’t want to rely on the B2B business so much because it is way too cyclical and the return on capital employed is a little lower because your inventory and payments are longer. Bharat and I focus mostly on the B2C side. We launched products that complement the business and the distribution network,” says Nikhil. They also focussed on branding. “Four years ago, we hardly spent anything on branding, but now we spend almost ₹100 crore a year on it. Now about 35 percent of our business is B2C.”

The brand got major visibility after it started advertising during the Indian Premier League in 2016. Polycab also roped in various stars as brand endorsers—from Paresh Rawal for wires since 2014 to R Madhavan for fans since 2018 and Ayushmann Khurrana for switchgear in 2019.

In 2015, the youngest from the second generation, Inder’s son Kunal, 26, joined the company after completing his bachelor’s in management studies from Mumbai University. “I started handling some key channel partners and contractors under my father’s guidance. I continue to update myself across functions,” he says.

The first generation continues to provide guidance and motivation, encouraging the second generation to take risks and learn from their mistakes. “Once I made a mistake in our export business. We supplied the wrong cable for an order due to a mistake by someone else, and lost around ₹30 lakh,” recollects Bharat, executive director at Polycab. He went to his uncle Inder. “I told him it was my team’s fault and took complete ownership of the mistake. He said, ‘What’s done is done, don’t worry about it. As long as you know you’ve made a mistake... don’t repeat it’. This approach has motivated us to perform better each day.”

With an estimated 18 percent share of the organised market for cables and wires, Polycab is the largest manufacturer in India in this segment. The task for the next-gen is to expand the revenue share of FMEG—fans, lighting, switchgears, switches and pumps—which is at 8 percent now.

“Having made inroads into the FMEG market, the next task is to become a dominant player in the sector like we are in wires and cables, and to strengthen the brand,” says Inder.

With the growth in residential, commercial and industrial infrastructure, the consumption of electrical goods has increased exponentially in India and companies are vying for market share in the sector, with Havells India currently leading with a 14 percent market share.

“Cables and wires remain a core business for Polycab, accounting for 90 percent of revenues. Despite the high competitive intensity in FMEG, the company’s revenue from this segment has been growing at 40-50 percent on a small base,” says Ashish Poddar, research analyst at Anand Rathi Share and Stock Brokers.

Last April, Polycab India made its debut on Dalal Street. The public issue was oversubscribed 92 times, and the stock currently quotes 56 percent higher than the issue price (the current carnage in the markets notwithstanding). The company continues to be in growth mode and an investor favourite. Revenues grew by 24 percent in the July to September quarter last year over the previous year, and operating profits grew by 26 percent because of higher government spends on infrastructure projects. Wires and cables revenue jumped by 21 percent in the September-December quarter on the back of strong demand from the institutional segments in the domestic and export market.

Polycab’s growth has been in line with the industry and is expected to continue as the government is focusing on electrification and also rural development, adds Poddar.

The company has 24 manufacturing facilities of which four are dedicated to FMEG and the rest to cables and wires. The Halol facility accounts for 64 percent of total capacity, with a utilisation rate of 80-85 percent.

Given the strong demand for wires and cables across industries and Polycab’s competitive advantage among peers followed by FMEG traction, analysts from Dalal & Broacha Stock Broking Pvt Ltd believe Polycab will grow at a compound annual rate of 17 percent between FY19 and FY22. The opportunity for the company is immense seeing the government’s visibility in implementing infrastructure projects worth ₹102 lakh crore over five years, they add.

What also augurs well for the wires and cables sector is that it is gradually moving from being a largely unorganised one comprising smaller regional players to an organised market comprising pan-India branded players. At an overall level, there were 519 organised players, accounting for 66 percent share of the wires and cables industry’s production in FY18. The share of organised players is expected to increase to approximately 74 percent by FY23 because of GST implementation, which reduces the price gap between the organised and unorganised sectors, say analysts.

Samit Vartak, founding partner and CIO, SageOne Investment Advisors, reckons Polycab is strongly placed in the wires and cables sector. “The company will deliver strong earnings growth in the coming years considering its pan-India distribution network which helps it roll out new products swiftly,” he says.

In December last year, Polycab announced a plan to set up 100 ‘Experience Centres’ by 2021 to boost consumer experience with its range of electrical goods and appliances. “With the addition of FMEG and a wide range of cables and wires, it became important to showcase the entire range under one roof,” says Inder.

The first centre was inaugurated in Lohar Chawl where the first generation started off, while two more have been set up in Pune and Thiruvananthapuram . “This has helped consumers know our offerings well and our trade partners to experience the wide range and add it to their business. It’s been a great experience for our dealers, retailers and consumers, and we intend opening more centres across India,” he adds.

The foremost challenge for Polycab in the FMEG business is the competition in the sector, says Poddar.
“The company will have to focus on winning over consumers with its products and quality. It is addressing the challenge by spending more on branding and advertisements, which is working well for the company,” he says.

With uptick in revenue in the recent quarters, it looks like it is on the right track.

Tweets by @forbesindia
Coronavirus and the global economy: yes, there really is cause for optimism
Covid-19 lockdown: Does the F&B industry need to rethink its business models?