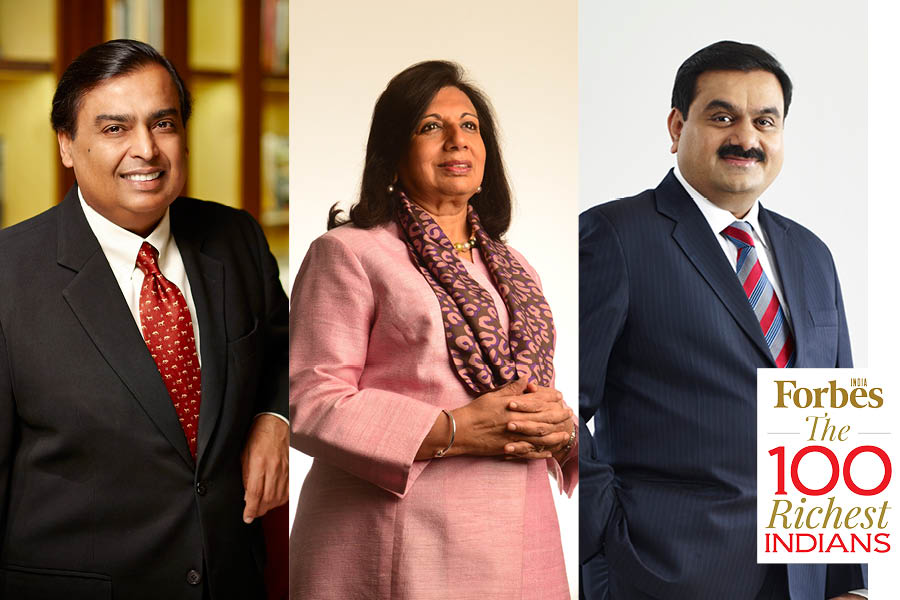 India’s rich have gotten richer in the last year. The last year, which saw a severe economic disruption on account of the Covid-19 pandemic was not enough to reduce the wealth of the top 100 on the Forbes India Rich List. As a group, their collective net worth rose 14 percent to $517.5 billion from a year ago. This, even as a third of the listees saw their wealth decline and a dozen were knocked off the list. Add to that the nine new comers this year and it shows that the ranks of India’s wealthy saw a healthy churn.  Top on the list was Mukesh Ambani, chairman of Reliance Industries. At number one for the thirteenth consecutive year, his net wealth stands at $88.7 billion. His company had a good year with $20 billion of investments in its mobile services business Jio Platforms. Facebook and Google, two of the world’s top technology companies were large investors as were a host of others–KKR, Silver Lake, Mubadala to name a few. The money also resulted in a rerating of the telecom sector with fellow tycoon Sunil Mittal moving up three slots to rank 11 with a net wealth of $10.2 billion.  Check out India's 100 Richest Persons Full List here. Part of the gain can be attributed to a cut in corporate taxes last year to 25 percent from the previous 35 percent. This would allow profitable Indian enterprises to retain a higher portion of their earnings and invest them in future growth or return them to shareholders. Companies with expanding business franchises benefited the most. Take, Radhakishan Damani who runs Avenue Supermarts, India’s most profitable retailer. Worth $15.4 billion, the 65 year old, who is also an active investor in a host of Indian businesses climbed three spots.  As a pack, pharma billionaires saw their businesses increase in value–as the disruption in API supplies for China, the demand for cheap generics in the West as well as more contracts for customised medical research and clinical trials saw markets rerate their prospects. Cyrus Poonawalla worth $11.5 billion who runs the Serum Institute of India, and is working on clinical trails for the Oxford-Astrazeneca Covid-19 vaccine was a big beneficiary.  Other prominent gainers include Dilip Shanghvi ($9.5 billion) of Sun Pharmaceuticals and Murali Divi ($6.5 billion) of Divi's Laboratories.    As new businesses matured, their founders, often first generation entrepreneurs entered the list. Sanjeev Bikhchandani who runs Info Edge (India) and runs the country’s most popular job portal debuted at rank 68 with a net wealth of $2.1 billion. Speciality chemicals, another sector that is expected to see more business move from China to India saw two inclusions. Vinod Saraf ($1.4billion) and Arun Bharat Ram ($1.34 billion) who run Vinati Organics named after his daughter and SRF, respectively were new inclusions. New demat openings and increased trading by Indians during the lockdown saw brothers Nithin and Nikhil Kamath enter the list at rank 90.