Thanks to its "everyday low prices" model, the Indian retailer storms into the Fab 50 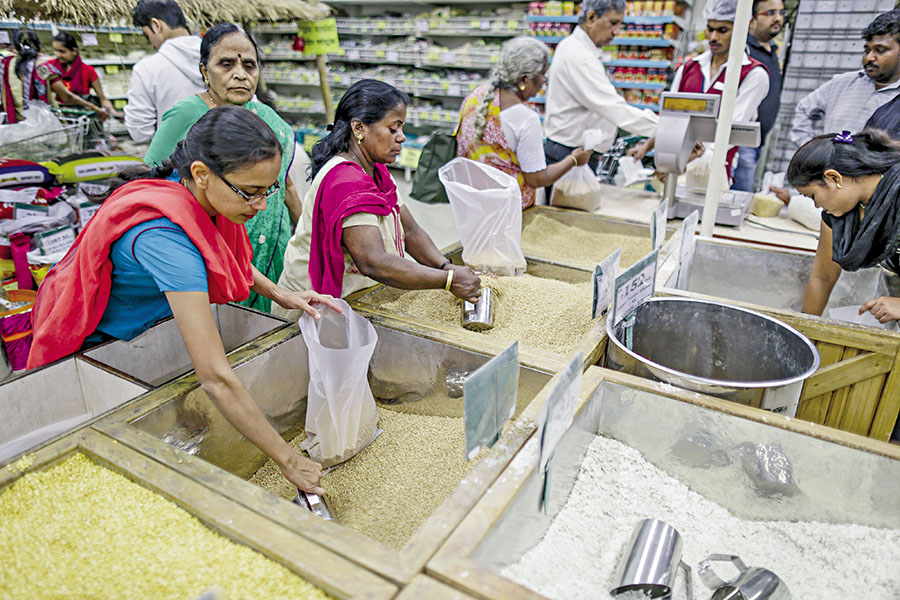 Rice and easy does it: Shoppers at a DMart supermarket in Thane, Mumbai
Image: Dhiraj Singh / Bloomberg

It didn’t take long for Indian retailer Avenue Supermarts to break into the Fab 50. It listed its shares in March of last year, so it’s eligible for the list for the first time because companies must be publicly traded for at least a year. Thanks to a 31 percent increase in revenue and a 75 percent jump in net profit over its previous fiscal year, Avenue had no trouble joining the elite ranks.

Investors agree—they’ve bid up the stock by 66 percent in the past year, pushing the market capitalisation to $14.1 billion and making Avenue one of the world’s most valuable hypermarket companies. It runs supermarket chain DMart, which sells everything from groceries and apparel to toys and games and generated $2.3 billion in revenue for the year ended March 31. “DMart is way ahead of most competitors,” says Abneesh Roy, senior vice president at Mumbai’s Edelweiss Securities. “Its debt levels are negligible. Its positioning is watertight and the management is really focussed. Retail is all about execution. Anyone can talk strategy, but they have executed year after year.”

DMart operates on an “everyday low cost, everyday low prices” model, similar to US chain Walmart’s. Shoppers get hooked on the low prices and become loyal customers. Take Ashish Sood, a software manager who shopped at DMarts in Hyderabad and Bengaluru. After he moved to Chennai he kept looking for an outlet until one opened up in the suburb of Virugambakkam. The store sports black-and-white signs saying some products are 6 percent cheaper than the maximum retail price set by the manufacturer, whether cereal, butter or shampoo. “We get all our big-ticket items—rice, oil, flour—from here,” he says while shopping with his wife to stock up on a three-month supply. “We are able to save a lot on the bill.”

DMart can hold down costs because it owns most of the real estate. Also, it buys directly from manufacturers. “DMart’s product mix has been almost the same in the last five years,” adds Roy. “This has helped it retain lower prices, compared with other retailers.”

Based in Mumbai, DMart opened its first store in 2002 and only nine more over its first eight years. The founder, Radhakishan Damani, who shares a $12.2 billion fortune, wanted to understand the nuances of the business before ramping up. DMart now counts 157 stores across the country.

Along with the soaring stock are rising concerns that Avenue is overvalued. “Everything but the stock is on discount,” says a research report from Mumbai’s Ambit Capital. “Even Walmart never enjoyed such rich valuations.” Brokerage houses are also concerned that if the company expands with leased stores as opposed to company-owned stores, it could hurt its profit margins.

And while DMart seems to have mastered offline retailing, online retailing is rabidly competitive. “[As in] many countries, concerns of disruption for brick-and-mortar retail businesses over longer-term can’t be ruled out,” says an equity report from Mumbai’s Citi Research in May. The e-grocery segment alone is expected to more than quadruple by 2020, to at least $4 billion. Large players include the Walmart-Flipkart combination, online grocery major BigBasket.com, Amazon and Reliance Industries.

In June, Reliance Retail announced an ambitious ecommerce plan that would involve online sales and an offline system for delivery through millions of mom-and-pop grocery stores across India. “We see merchants as critical customer-fulfillment points who will share a beneficial relationship with us,” said Reliance Industries chairman Mukesh Ambani at the company’s annual meeting in July.

As companies scramble to build their ecommerce operations, DMart launched its own click-and-pick offering, called DMart Ready. Customers order online and then pick up their groceries from smaller DMart Ready stores in their neighbourhood or have them delivered at a small cost. But DMart Ready offers fresh vegetables on only a limited scale, and that’s expected to hurt growth.

What might help DMart is the Indian government’s proposed ecommerce policy. That would give brick-and-mortar stores—especially mom-and-pops—a boost by curbing the deep discounts that ecommerce players thrive on. It also calls for tighter scrutiny of mergers and the appointment of an ­ecommerce regulator to shield domestic ecommerce players from foreign competition.

Meena Ganesh, an investor in BigBasket, says some elements of the government’s plan are not acceptable. “Companies need to do disruptive things in order to change consumer behaviour,” she says. “This could be free delivery, deep discounting, subscription packages or financing. The government should not be in the business of defining what is deep discounting or how bulk purchases should be done. This is clear interference.”

No matter what the government decides, Avenue should continue to post gaudy results. Sales in the organised brick-and-mortar retail segment are expected to more than double in the four years ending in 2020, to $115 billion.

(This story appears in the 12 October, 2018 issue of Forbes India. To visit our Archives, click here.)

Tweets by @forbesindia
I took the picture that changed the war: Nick Ut
Opportunity zones: Break and build