Billionaire investor, often known as the Big Bull, on his best trading year and why India's best is yet to come 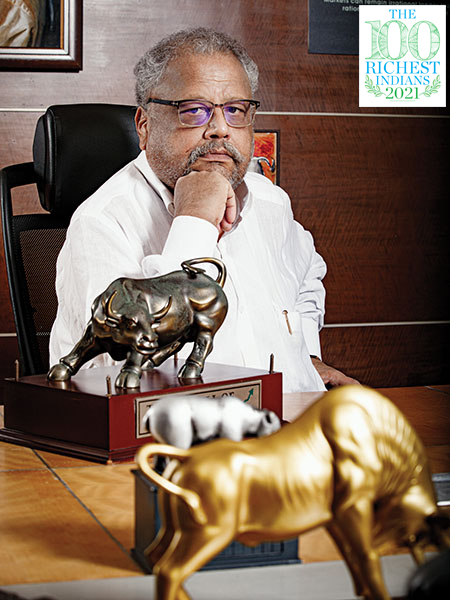 The past year has been great for Rakesh Jhunjhunwala who in earlier interviews has described himself as a middle-class billionaire
Image: Mexy Xavier

By now, large parts of Rakesh Jhunjhunwala’s story are well known. How the son of a civil servant came to the market in 1985 with almost nothing and turned it into a fortune. How he made a killing by investing in Titan. And how 2025 onwards, he plans to give away a large portion of his wealth to charity.

It is the authenticity of this story that makes it so powerful. Investors hang on to every word he says on markets and the economy. Company managements regularly pitch to him in the hope that he invests with them. They know only too well the value of having him as an investor. As a market watcher once told this reporter: “One listens to him and comes away thinking, ‘If he can do it why can’t we?’”

But Jhunjhunwala, who is in an expansive mood on a sultry October evening, confesses he’s not as infallible as people think he is. His mistakes are less well-known than his successes. “I am not afraid of taking a loss. I only learn from mistakes,” he says in an interview at his sea-facing 15th floor office at Nariman Point (once Mumbai’s premier business district).

It’s a simple office where the walls are peppered with investing aphorisms. “The market can remain irrational longer than you can remain solvent,” says one by economist John Maynard Keynes. The coasters have imprinted on them sayings from the likes of value investing legend Benjamin Graham.

Inside people pour over trading charts, spreadsheets and incoming result announcements. To a casual observer, there’s a sense of camaraderie that fosters collaboration. Occasionally someone enters to show Jhunjhunwala something or to take his approval.

“ India’s economic story could go into a burst. We have $1 trillion in savings and only 8 crore demat accounts. Where will money from the remaining 90 crore go?”
- Rakesh Jhunjhunwala

The past year—with its one-way bull run—has been great for Jhunjhunwala who in earlier interviews has described himself as a middle-class billionaire. His wealth has more than doubled to $5.5 billion, moving him 18 spots on the 2021 Forbes India Rich List to rank 36. His large holdings, Titan and Tata Motors, have done well. But even these moves have been eclipsed by his trading gains. “I’ve had the best trading months of my life in the last 18 months. I hope it continues,” he says. What he leaves unsaid is that given the India story, ‘his best is probably yet to come’.

While investor appetite has waxed and waned over the years, the Big Bull has always been an incorrigible India optimist. Over the years, he’s been out there talking about what makes him so bullish—the skillset of its population and its favourable demographics being the two main reasons. Now, more than any time in the past, he believes India’s time has come. “India’s economic story could go into a burst,” he says. “We have $1 trillion in savings and only 8 crore demat accounts. Where will money from the remaining 90 crore go?” he asks, pointing to why stocks could do well for many years to come. 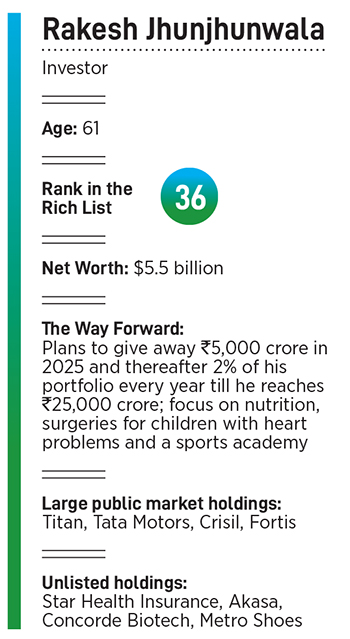 In addition, corporate India balance sheets have deleveraged considerably and now have the ability to spend. “We have a credit cycle behind us and a capex cycle ahead of us. Tax collections will go through the roof,” he says. Add to that a reformed public sector and a privatisation push and the India story remains strong.

As a result, Jhunjhunwala believes that a double-digit growth performance this fiscal could be followed with 7-9 percent next year, 8-9 percent in FY24 and 10 percent thereafter for the rest of the decade. The story could come unstuck, he says, if there is a geopolitical event, like an attack by China on Taiwan or a confrontation with our neighbours.

A Narendra Modi supporter, Jhunjhunwala recently made a presentation to the prime minister where he outlined a few suggestions for reforms. “He [Modi] understands business and I believe he is determined to do reforms,” he says, adding that his continuation is key to India achieving high rates of growth. When reminded that the last decade has seen disappointing growth, he dismisses it: “The past is not an indication of the future.” Like a true investor, he is looking to discount the future.

Indian markets seem to be doing much the same and pencilling in the next few years of growth. Corporate profits to GDP have been at decadal lows and have only recently started recovering. Still, sceptics wonder if they have discounted too much. Not Jhunjhunwala. “We have gone from 7,500 to 18,500 in one stretch, so we can always have a correction, but I don’t think we will have a reversal,” he says. “Remember the Dow never had a more-than-10 percent correction in the 1990s. It is possible we could be in the same situation.” He does concede there may be a few, very few, pockets of the market that may have discounted too much. But then again he asks, “Who are we to judge overvaluation? It is an intangible.”

While there are always risks in markets, Jhunjhunwala believes central banks will raise rates very slowly. It may affect some investors like pension funds, but overall he doesn’t see too many dark clouds.

And to dispel any notion that he’s becoming cautious, he says with his trademark bullishness, “I am still investing. If you give me ₹500 crore today, I will invest it in a day.”

One such trade happened a little over a month ago when on the morning of Invesco asking for an extraordinary general meeting at Zee Entertainment, Jhunjhunwala scooped up a large stake in excess of ₹200 crore, according to a filing on the National Stock Exchange. “A merger at a good valuation results in consolidation and that is always good,” he says.

Then there’s his investment in Akasa, an airline founded by former Jet Airways CEO Vinay Dube. Jhunjhunwala declined to answer any questions on the airline or on the aviation business in general as well as private investments in Metro Shoes and Star Health Insurance, which are on their way to being listed.

As he enters his seventh decade, Jhunjhunwala has started thinking about what to do with his vast fortune. He’s postponed his plans of giving it away to 2025, but says, “The intention to give it away has now expanded.” 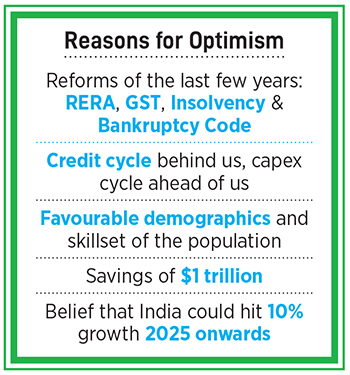 He’s willing to put down specifics. Between April and December 2025, he will donate ₹5,000 crore to his foundation, RARE Family Foundation. Thereafter, he will value his portfolio on March 1 every year and give away 2 percent till he gets to ₹25,000 crore. He wants his foundation to work in various areas—nutrition, surgeries for children with heart problems and to set up a sports academy.

The foundation will have a team with a chairman and the Jhunjhunwala family as the principal donor. “Ten percent [of donations] will be spent as per the discretion of the Jhunjhunwala family, while 90 percent will have to be passed by the advisory board and then spent,” he says. He doesn’t plan to get into the nitty-gritty of the day-to-day running of the foundation.

For now, Jhunjhunwala says he is, “philosophical about life and his role in the world”. He is more conscious that success is transient and temporary, and that he has to make an attempt to lead a healthier life. At 61, he is keenly aware of his own mortality. “The average life expectancy in this country is about 70 years,” he says.

Lately, he’s been spending more time with his family and children, with recent holidays to Goa, Delhi and Dubai. At home, he spends his time reading and watching movies. While his workday begins when the markets open, he now makes it to office around mid-day. In the past, Jhunjhunwala has said he plans to wind down his trading activities. He now believes he is closer than ever to doing it. “I am always thinking about it, but haven’t done it. I think it should happen in a year or two,” he says.

Still, one gets the sense that as a smart and alert investor, he is always on the lookout for his next doubler and is in no mood to slow down. If Jhunjhunwala continues to compound his wealth at a modest 15 percent, he could enter the Top 10 on the Forbes India Rich List in the next decade. And that’s a fantastic result for someone who came to the market in 1985 with no family wealth to invest. Over the years, he’s made sensible use of leverage, he says.

Unlike other billionaires, he doesn’t have a retinue of staff, remains accessible, is unfailingly polite (though he can have a short fuse at times), answers his own phone and almost always returns calls. And that’s the authenticity that common people love.

As we wind down the interview, I ask him about the biggest influences in his life. He cites two—his father and Radhakishan Damani. And his most important learning from the founder of the DMart chain of stores is something all investors would do well to imbibe, ‘Be a tortoise, not a hare’.