To date, just under 3.3 billion vaccine doses have been administered worldwide, according to vaccination data from local governments compiled by the Our World in Data project at the University of Oxford 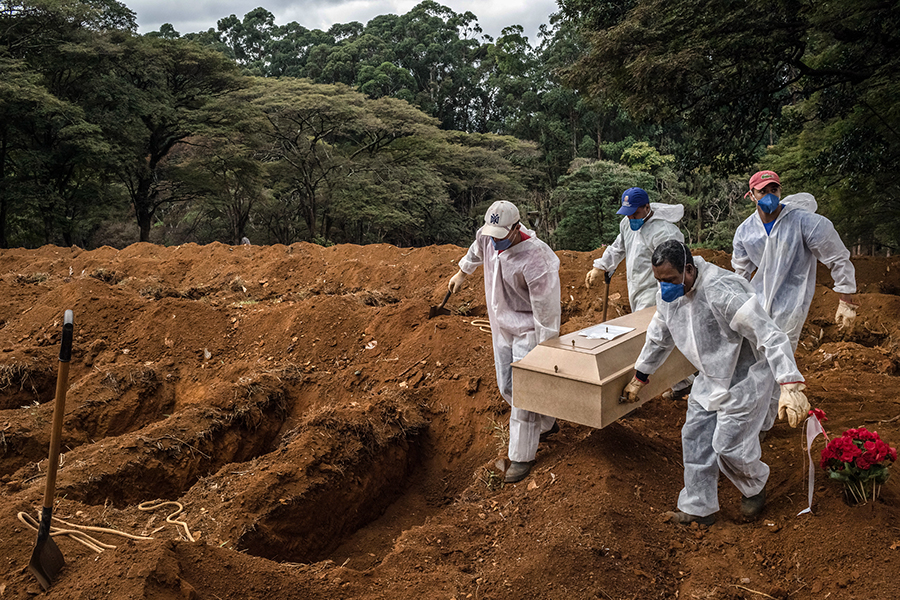 Gravediggers carrying the coffin of a COVID-19 victim during a burial at Vila Formosa cemetery in São Paulo on May 8, 2021. The world’s known coronavirus death toll passed four million on Thursday, July 8, 2021, a loss roughly equivalent to the population of Los Angeles, according to the Center for Systems Science and Engineering at Johns Hopkins University.
Image: Mauricio Lima/The New York Times

The world’s known coronavirus death toll passed 4 million Thursday, a loss roughly equivalent to the population of Los Angeles, according to the Center for Systems Science and Engineering at Johns Hopkins University.
It took nine months for the virus to claim 1 million lives, and the pace has quickened since then. The second million were lost in 3 1/2 months, the third in three months, and the fourth in about 2 1/2 months. The number of daily reported deaths has declined recently.
Those are officially reported figures, which are widely believed to undercount pandemic-related deaths.
“The numbers may not tell the complete story, and yet they’re still really staggering numbers globally,” said Jennifer B. Nuzzo, a researcher at Johns Hopkins University’s Bloomberg School of Public Health.
Nuzzo said the number of excess deaths reported around the world suggested that “lower-income countries have been much harder hit than their official numbers would suggest.”
Dr. Tedros Adhanom Ghebreyesus, director-general of the World Health Organization, called 4 million dead a tragic milestone on Wednesday, and said the toll was continuing to mount largely because of dangerous versions of the virus and inequities in the distribution of vaccines.
“Compounded by fast-moving variants and shocking inequity in vaccination, far too many countries in every region of the world are seeing sharp spikes in cases and hospitalizations,” Tedros said at a news conference.
The official death toll numbers tell only part of the horrifying pandemic story. In many places, people have died without family to comfort them because of rules to prevent the spread of the virus. And many countries were completely overrun.
The dead overwhelmed cremation grounds in India in May, where at least 400,000 confirmed deaths have been reported and the actual number is likely higher. That was also the case in funeral homes in the United States, which surpassed 600,000 known deaths last month.
Latin America Ravaged
The virus has hammered Latin America since the start of the pandemic, and some of those nations have been grappling with their deadliest outbreaks to date.
As of Tuesday, seven of the 10 countries with the highest death rates relative to their populations over the past week were in South America, according to data from Johns Hopkins, and the virus has been a destabilizing force in many countries in the region.
Government health data in Colombia show that more than 500 people died from the virus each day in June. The country has also gone through weeks of explosive protests over poverty made worse by the pandemic that were sometimes met with a violent police response.
A wave of cases in Peru cost many people their livelihoods, and thousands of impoverished people occupied empty stretches of land south of Lima. In Paraguay, which as of Tuesday had the highest number of COVID-19 deaths per capita of any country during the previous week, social networks often resemble obituary pages.
Brazil, which recently passed 500,000 official deaths, had the highest number of new cases and deaths of any country in the past week. A recent study found that COVID-19 had led to a significant decrease in life expectancy in Brazil.
Vaccines Make a Difference
Several vaccines have proved effective against the coronavirus, including the highly contagious Delta variant, and death rates have dropped sharply in many parts of the world where large numbers of people have been vaccinated, like the United States and much of Europe.
But the virus is still running rampant in regions with lower rates of vaccination, like parts of Asia, Africa and South America. Some places with relatively high vaccination rates, like England, are also seeing spikes in cases, though fewer of those cases have been leading to hospitalizations and deaths.
Dr. Maria Van Kerkhove, who works on coronavirus response for the WHO, said that there were “more than two dozen countries that have epidemic curves that are almost vertical.”
“The virus is showing us right now that it’s thriving,” she said.
Wealthy countries and international organizations have pledged billions of dollars to COVAX, a global vaccine-sharing initiative, and nations like the United States have promised to supply hundreds of millions of doses. But those numbers pale in comparison with the 11 billion vaccine doses that experts estimate will be needed to rein in the virus around the world.
To date, just under 3.3 billion vaccine doses have been administered worldwide, according to vaccination data from local governments compiled by the Our World in Data project at the University of Oxford. Nearly all have been of vaccines that require more than one dose to be fully effective.
Country-to-country differences in progress are stark, with some already inoculating most of their adult citizens while others have yet to report administering a single dose.