Shonda Rhimes: The queen of the small screen

Shonda Rhimes spent the first 12 years of her TV career contributing to Disney's empire. Now she's building her own 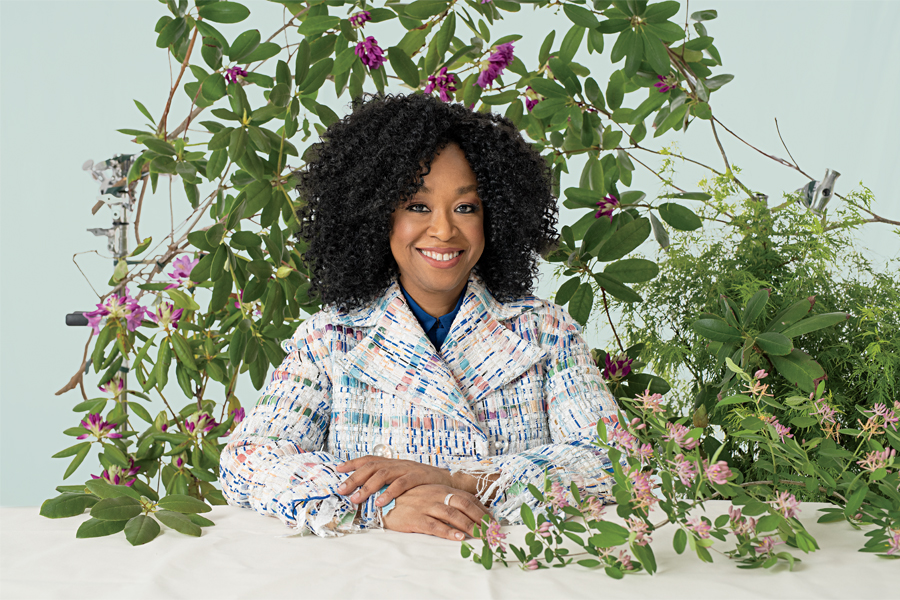 Shonda Rhimes: “I’m very clear on my track record... I’m no longer worried about negotiations in any way, shape or form.” Photo by Jamel Toppin for Forbes

Last Christmas, as millions of people were watching Bridgerton for the first time, Shonda Rhimes was at home in Los Angeles with her three daughters, unwrapping gifts. Her first hints of the mania her debut Netflix series was sparking were multiple gushing texts from the streaming giant’s CEO, Ted Sarandos. Then came an email from Hillary Clinton.
“How does one cure oneself of a Duke obses­sion?” Clinton asked, referring to the actor Regé-Jean Page and his beloved portrayal of aristocrat Simon Basset in the Regency-era drama.

With her adaptation of the popular romance novels, Rhimes, 51, has done the seemingly impossible: Created a must-see sensation in a world overflowing with binge-worthy television. In the first 28 days it was available, 82 million households—40 percent of Netflix’s paying audience—watched the eight-episode series, smashing the service’s previous viewing records. Sarandos booked a second season within weeks, and in April he agreed to fund seasons three and four. A spinoff is in the works. Rhimes, who is already making about $30 million a year to create exclusive content for the streamer, is expected to receive millions in bonus pay because of the series’ success—a rare feat in typically frontloaded streaming deals.
“I never worried that I deserve the money,” Rhimes says. “I deserve every penny I make... I always find these young women who have been conditioned to believe or to speak of themselves in ways that make them smaller. It drives me bonkers.”
Bridgerton’s resounding success is proof that jumping ship in 2017 from ABC, her home for more than a decade, has paid off. “I don’t know how you do things without betting on yourself,” the show creator says. “If I was going to play it safe, I would’ve stayed exactly where I was and kept doing exactly what I was doing. It wasn’t like a crazy leap to believe in myself.”
Not after all her success. Rhimes has brought in more than $2 billion to ABC’s parent company, Disney, with hits such as the medical drama Grey’s Anatomy; Scandal, which cast Kerry Washington as the first Black female lead in a network drama in almost 40 years; and How to Get Away with Murder, starring Viola Davis, who became the first Black woman to win a Best Lead Drama Actress Emmy for her role.
Even so, Rhimes had to constantly fight for higher writing and producing salaries (she went from making about $30,000 per episode to $250,000 since Grey’s premiered in 2005, Forbes estimates) and a larger cut of the show’s profit. Network executives would eventually step up, she says, but it was always a battle.
“It’s really startling to realise how much money your work is earning for a place and then to discover how much they think that you’re worth versus that,” she adds of the years she spent wrangling with ABC.
When she began negotiations with Sarandos in 2017, Rhimes dispensed with any pretense of modesty. “I was very clear that everybody was going to make it happen in the way that I wanted,” she says. Sarandos concurs: “I’ve been astonished by Shonda’s total clarity about what she wants in this next chapter. [She] is at the very top of her game.”

“Shonda Rhimes is a force like no other,” says Michelle Obama, who first met Rhimes when the showrunner sat in the Obamas’ box at the 2013 Kennedy Center Honors. “All you have to do is look at the empire that keeps growing year after year to see that her stories—her example—are something people are hungry for.”
That empire, dubbed Shondaland, is now 50 staffers strong and, like the casts of her series—some of the most racially diverse on television—is “uncommonly inclusive”, according to Rhimes. While half are engaged in creating television, the others are working in new areas. There’s Shondaland Audio, a partnership with iHeartRadio, which has a Bridgerton companion podcast, as well as shows hosted by Laverne Cox and Scandal star Katie Lowes. Shondaland.com, a partnership with Hearst, is a mix of articles meant to empower women and update fans on Rhimes’s series. There’s also an eight-week Peloton programme based on her 2015 inspirational book, Year of Yes, and a top-selling master class.
Forbes estimates Rhimes will earn close to $40 million from Netflix this year thanks to her Bridgerton bonuses, plus about $8 million in producing fees for Grey’s Anatomy and Station 19, another $17 million for her share of the profits from Grey’s, Scandal and How to Get Away with Murder, and a few million more from Shondaland ventures, including podcasts, web content, books and more. All told, Rhimes should take home close to $70 million before taxes in 2021, her biggest payday yet. Since her television career began, she has earned more than $350 million, pre-tax.
All that is just the beginning, too, as Rhimes looks decades ahead. “We’re not working for anybody... We do things the Shondaland way,” she says, adding: “In 30 years, somebody should look around and not know there’s a Shonda to the Shondaland.”

Tweets by @forbes_india
Photos of the week: July 10 to July 16
Tribute: Danish, now, above the line of fire