100 days of war in Ukraine: A timeline

As Russia extends its grip over the east, we look back on 100 days of fighting that has killed tens of thousands of civilians and reduced entire cities to rubble 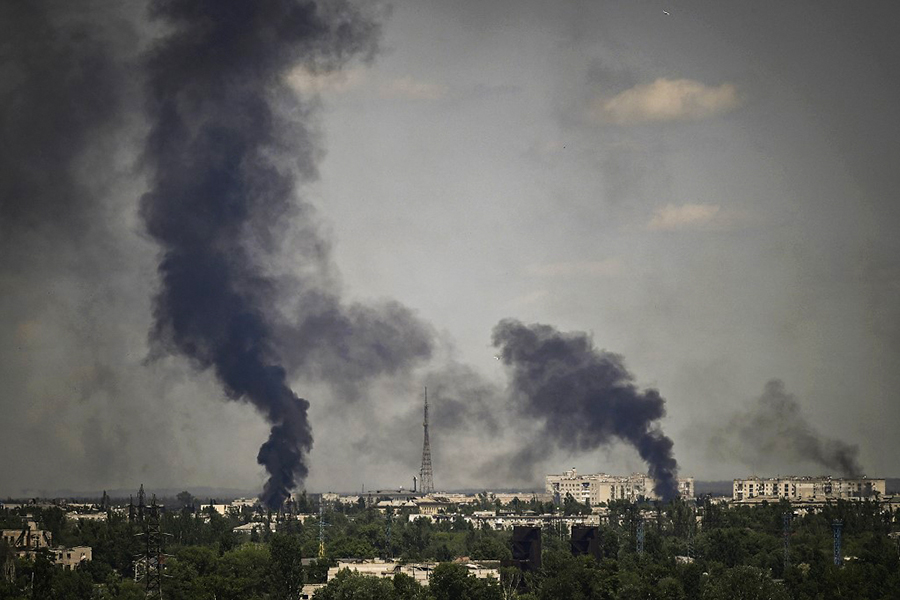 Smoke rises in the city of Severodonetsk during heavy fightings between Ukrainian and Russian troops at eastern Ukrainian region of Donbas on May 30, 2022, on the 96th day of the Russian invasion of Ukraine. EU leaders will try to overcome Hungary's rejection of a Russian oil embargo on May 30, 2022 as part of a further tightening of sanctions against Moscow, whose forces are advancing in eastern Ukraine, with fighting in the heart of the key city of Severodonetsk. (Credits: ARIS MESSINIS / AFP)

Russia invaded Ukraine in the early hours of February 24, setting off the worst conflict in Europe in decades.
As Russia extends its grip over the east, we look back on 100 days of fighting that has killed tens of thousands of civilians and reduced entire cities to rubble.
February 24: Russia invades
Russian President Vladimir Putin announces a "special military operation" to "demilitarise" and "de-Nazify" the former Soviet state and protect Russian speakers there.
A full-scale invasion starts with air and missile strikes on several cities. Ukrainian President Volodymyr Zelensky pledges to stay in Kyiv to lead the resistance.
February 26: Massive sanctions
The West adopts unprecedented sanctions against Russia and offers Ukraine military aid.
Air spaces are closed to Russian aircraft and Russia is kicked out of sporting and cultural events.
February 27: Nuclear threat
Putin puts Russia's nuclear forces on high alert, in what is seen as a warning to the West not to intervene in Ukraine.
February 28: First talks
During the first peace talks between Kyiv and Moscow, Russia demands recognition of its sovereignty over Crimea, the "demilitarisation" and "de-Nazification" of Ukraine and a guarantee Ukraine will never join NATO. Ukraine demands a complete Russian withdrawal.
March 3: Kherson falls
Russian troops attack Ukraine's south coast to try to link up territory held by pro-Moscow rebels in eastern Ukraine with the Russian-annexed Crimea peninsula.
On March 3, Kherson in the south becomes the first city to fall. Russian forces relentlessly shell the port of Mariupol.
March 4: Media crackdown
Russia passes a law punishing what it calls "fake news" about its offensive—such as referring to its "special military operation" as an invasion—with up to 15 years in prison.

March 16: Mariupol theatre razed
Russian air strikes raze a Mariupol theatre killing an estimated 300 people sheltering inside. Moscow blames the attack on Ukraine's nationalist Azov battalion.
March 16: Zelensky lobbies Congress
Zelensky tells the US Congress to "remember Pearl Harbor" and lobbies Western parliaments for more help.
April 2-3: Horror in Bucha
After a month of fighting, Russia withdraws from northern Ukraine, announcing it will focus its efforts on conquering the eastern Donbas region.
On April 2 and 3, Ukrainians find dozens of corpses of civilians scattered on the street or buried in shallow graves in the Kyiv suburb of Bucha, which Russian forces had occupied.
Moscow dismisses accusations of Russian war crimes, saying the images of the bodies are fakes.
April 8: Train station carnage
A rocket attack on a train station in the eastern city of Kramatorsk kills at least 57 civilians being evacuated from Donbas.
April 12: Biden speaks of 'genocide'
Biden accuses Russia of "genocide", saying Putin appears intent on "trying to wipe out the idea of even being able to be a Ukrainian".
April 14: Flagship sinks
Ukrainian missiles hit and sink Russia's missile cruiser Moskva in the Black Sea, a major setback for Moscow.
May 11: $40 billion in US aid
US lawmakers back a huge $40-billion package of military, economic and humanitarian aid for Ukraine.
May 16: Kharkiv retreat
Ukraine says its troops have driven Russian forces back from the outskirts of the country's second-largest city, Kharkiv, to the Russian border.
May 18: Sweden, Finland apply to NATO
Finland and Sweden apply to join NATO, reversing decades of military non-alignment because of Russia's invasion of Ukraine.
May 23: First war crimes conviction
A Ukrainian court finds a 21-year-old Russian soldier guilty of war crimes and hands down a life sentence for shooting dead a 62-year-old civilian in northeastern Ukraine in the opening days of the war. He has appealed.
May 21: Battle for Mariupol ends
Russia declares it is in full control of Mariupol after Ukraine ordered troops holding out for weeks in the Azovstal steelworks to lay down their arms to save their lives.
Nearly 2,500 soldiers surrender and are taken prisoner by Russia.
May 30: EU bans most Russian oil
EU leaders overcome resistance from Hungary to agree a partial ban on most Russian oil imports as part of a sixth wave of sanctions.
The deal bans oil imports delivered by tanker but allows landlocked countries such as Hungary to continue receiving Russian oil by pipeline.
May 31: Russia seizes part of eastern city
Russian troops seize part of the key eastern Ukrainian city of Severodonetsk, its governor says.
Taking the city would give Russia de-facto control over Lugansk, one of two regions that make up the Donbas, Ukraine's industrial heartland.
© Agence France-Presse

Tweets by @forbesindia
Photo of the day: Johnny Depp wins
Can quick commerce startups ride out the downturn?