They function as normal hives, but these apiaries are decked out with high-tech artificial intelligence systems set to ensure longevity for the vital pollinators 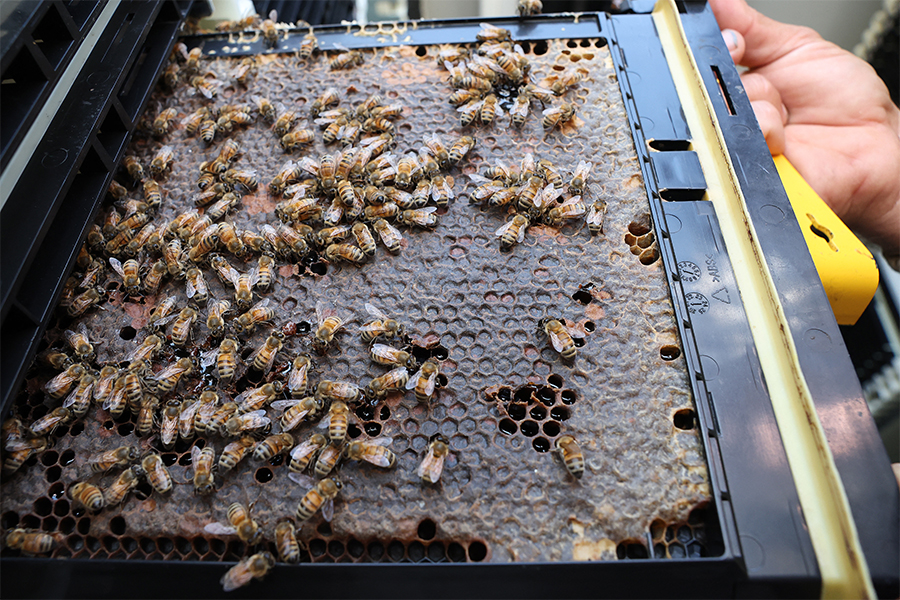 A beekeeper displays a swarm of bees in a new hive, part of the high-tech Beehome project, in Israel's Kibbutz Bet Haemek in the northern Galilee, on May 14, 2022. (Credits: JACK GUEZ/ AFP)

Beit Haemek, Israel: They function as normal hives, but apiaries built at a kibbutz in Israel's Galilee are decked out with high-tech artificial intelligence systems set to ensure longevity for these vital pollinators.
"There are two million bees here," said Shlomki Frankin as he walks into a 12-square-metre container in Kibbutz Beit Haemek in northern Israel.
Dubbed "Beehome", the project is the brainchild of an Israeli startup and houses up to 24 hives, explained Frankin, clad in a hat and veil to protect himself from stings.
The 41-year-old told AFP that the hives feature a multi-purpose robot that does everything from monitor the bees to adjust the habitat and provide them with care.
Startup Beewise came up with the idea in an effort to reduce mortality rates in a species that has in the past years seen sharp rates of decline due to environmental threats.

"The robot is equipped with sensors that allow it to know what is happening in the hive frames," said Netaly Harari, director of operations at Beewise.
"Thanks to artificial intelligence, our software knows what the bees need," she explained in the workshop where the hives are assembled.
The robots can automatically dispense sugar, water and medication.
If a problem comes up, the beekeeper is alerted through an application, allowing for intervention remotely via computer, or in person if necessary.

The hives operate on solar energy, have adjustable temperatures, eliminate pests and can even extract honey automatically using an integrated centrifuge, Harari said.
By the end of May, the startup hopes to be producing its own honey for the first time—the "first honey in the world made with artificial intelligence", she enthused.
For Frankin, "the robot is a tool for beekeepers, but doesn't replace them".
They "save a lot of time", he continued, because they allow him to "do a lot of simple things remotely".
About a hundred of these high-tech hives are already functional in Israel, with a dozen others sent to the United States.
Beewise is eyeing a foothold in the European market in two years.
Launched in 2018, the startup has 100 employees and by April had raised about $80 million to develop its exports.

According to professor Sharoni Shafir, who heads the bee research centre at the Hebrew University of Jerusalem's Rehovot campus, the technology can help protect increasingly threatened bee colonies.
"Sometimes, a beekeeper takes several months to realise there is a problem," he told AFP, adding that "with the robot, beekeepers can deal with the problem in real-time, reducing the bees' mortality rates".
One in every six species of bees have gone regionally extinct somewhere in the world, with the main drivers thought to be habitat loss and pesticide use, according to a 2019 study.
Shafir points in particular to the "decline in fields of flowers due to construction, which has reduced the sources and diversity of food for bees".
Added to that are diseases and pests, such as the varroa destructor, a mite that has a devastating effect on honeybees, the professor added.
"In Israel, between 20 and 30 percent of hives disappear every year," the entomologist said.
He noted that a significant portion of foods consumed by people are the result of cross-pollination by bees and other insects.
More than 70 percent of crops, including almost all fruits, vegetables, oilseeds, spices, coffee and cocoa are dependent on pollinators.
The United Nations' Food and Agriculture Organization on May 20 celebrates World Bee Day, which aims to underline the importance of preserving bee species.
"Bees and other pollinators have thrived for millions of years, ensuring food security and nutrition, and maintaining biodiversity and vibrant ecosystems," FAO has said.
"We depend on bees," Shafir emphasised.
By Alexandra Vardi
© Agence France-Presse