Taking the taboo out of sex in India

MyMuse, founded by Anushka and Sahil Gupta, are tackling this with tongue-in-cheek marketing and creative euphemisms, which they say make the adult products seem less intimidating and encourage first-time buyers 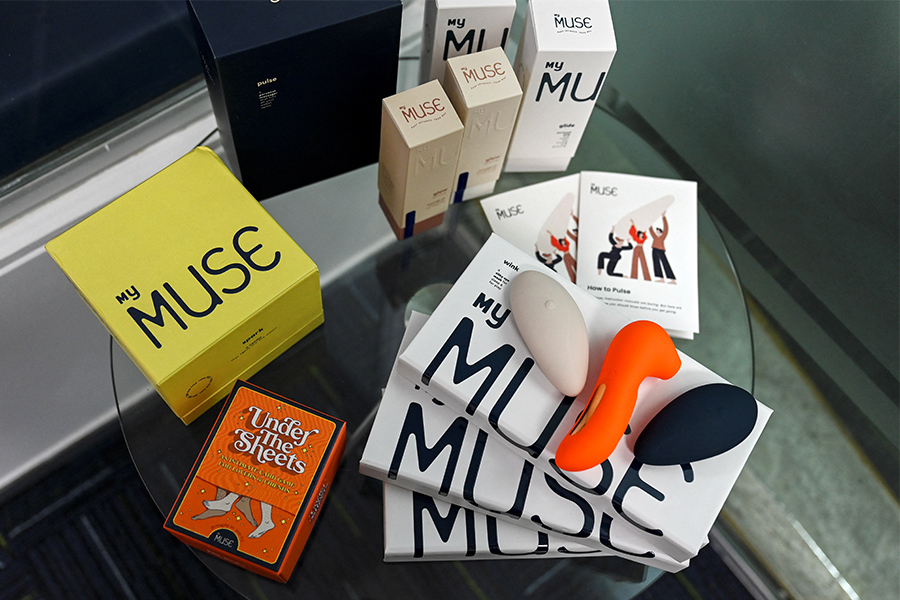 Mumbai, India: The couple behind a new start-up using adult toys and cheeky adverts to challenge long-held taboos say they want to take the "shame, guilt and fear" out of sex in India.
Despite its heritage as the land of the Kama Sutra, open discussions around sexuality and intimacy are often regarded as obscene in the largely conservative country.
MyMuse, founded by Anushka and Sahil Gupta, are tackling this with tongue-in-cheek marketing and creative euphemisms, which they say make the products seem less intimidating and encourage first-time buyers.
"Diwali is coming and so should you! And as always, we're urging you to save the fireworks for the bedroom," exclaimed one such advertisement on Facebook before one of India's biggest religious holidays, and its customary pyrotechnics, last year.

"There's this shame, guilt and fear associated with buying something that should be used in your intimate areas, and that's the first thing we wanted to turn around," Anushka says.
MyMuse is one of a growing number of businesses riding a wave of sexual liberation amongst urban young professionals, already navigating global trends on Instagram and comfortable with dating apps such as Tinder, Bumble and Hinge.
Investors too are betting on this untapped market in the vast country of 1.4 billion: India's nascent sex toys sector was valued at $91 million by TechSci Research in 2020, and predicted to grow 16 percent annually.

No sleaze, no misogyny

The Guptas began shipping out discreetly packaged vibrators — "massagers" in MyMuse's genteel parlance — candles, and lubricants from a spare bedroom in their home during last year's Covid-19 lockdowns.
Benefitting from capital pouring into Indian tech start-ups during the pandemic, the firm received seed funding from venture capitalist firms. They have made more than a dozen hires and now ship to nearly 200 cities nationwide.
Using a targeted social media campaign, they say they are trying to reframe the conversation around sex away from often "sleazy" portrayals in Bollywood movies.
"(We want to) just remove all of that misogyny, sexism from this idea and just make it something that's beautiful, that's natural, universal," Anushka, who left her job at WeWork to become an entrepreneur, explains.
There are a growing number of services for India's sexually curious: fellow start-up Gizmoswala offers same-day delivery on bondage kits for Mumbai residents, while LoveTreats exhorts online shoppers to discover their "naughty side" with lingerie sets and remote-controlled vibrators. 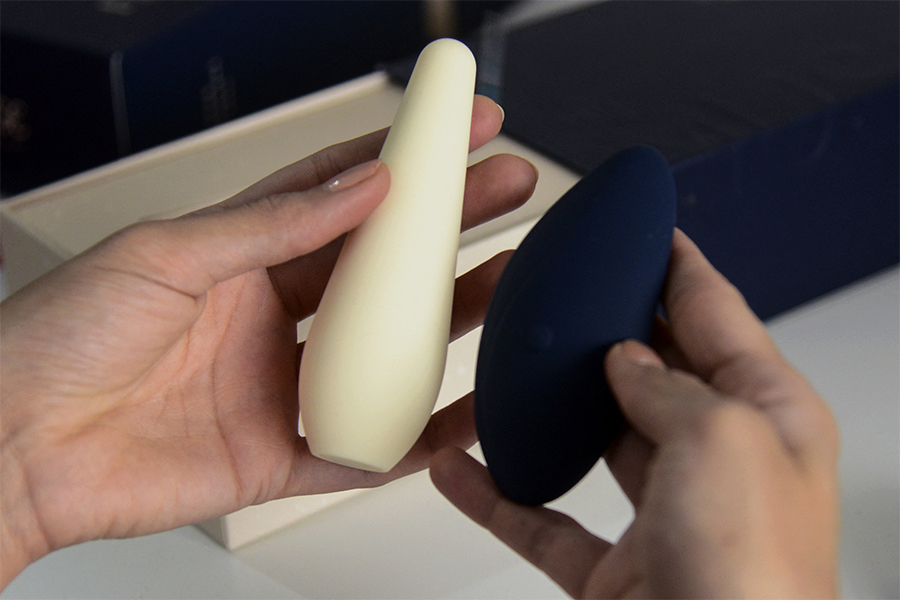 Indian law bans the import of toys that resemble human body parts. (Credit: SUJIT JAISWAL/ AFP)
But they still need to contend with wider society — particularly older, more conservative generations that idolise female virtue and honour, and a culture where arranged marriages are still the norm.
"There are many Indias when it comes to sexual awareness. While one India has accepted and changed, another is changing slowly and another is still 10 or 20 years behind," sex education specialist Jaya Aiyappa says.
Vigilante groups have attacked couples they believe are not behaving in line with "Indian values".
Politicians and the police have also been accused of raiding hotels, nightclubs and attacking young people for public displays of affection, drinking or wearing immodest clothing.
A haul of vibrators and dildos was seized by customs last year — the result of a boom in online orders during pandemic lockdowns — because Indian law still bans the import of "toys that resemble human body parts".

The lack of dialogue around sex can lead to misinformation and abuse, Aiyappa warns, adding that even efforts to introduce a broader sex education curriculum in schools have faced a backlash.
Anushka Gupta says she realised things needed to change when she returned from working abroad and struggled to find even basic sexual health products such as contraceptives and lubricants. 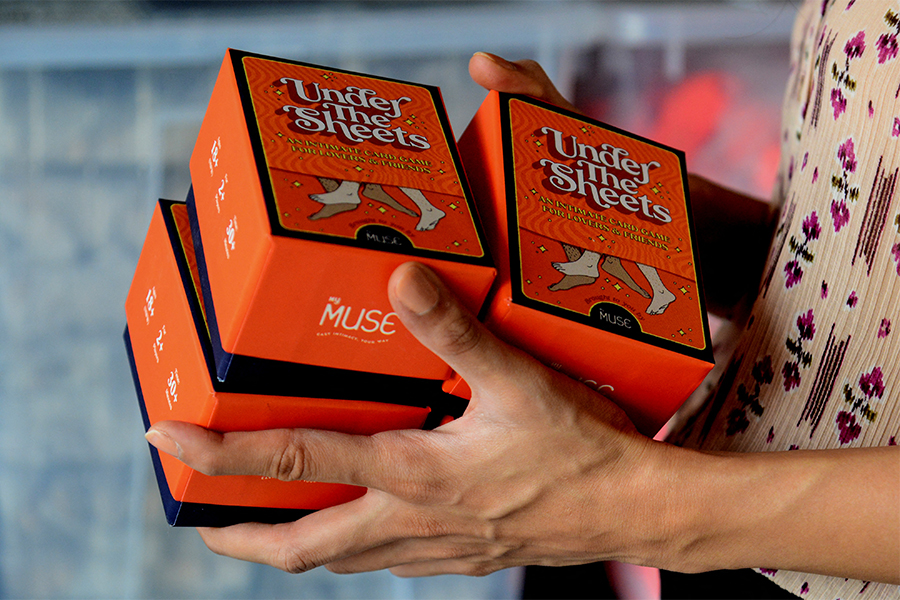 'Under The Sheets' is an intimate card-game sold by MyMuse India. (Credit: SUJIT JAISWAL/ AFP)
"This is a situation that's fundamentally broken," she said, adding that Indian women often face a culture of enforced silence around sex.
"It's the most typically Indian conundrum where they will not talk to a woman about sex at all until she's married, and the moment she's married they'll be like, 'So when's the baby coming?'"
But beyond challenging social norms, this new wave of start-ups see an opportunity for a "sexual wellness" industry in India.
Sahil, who has an MBA from Harvard Business School and previously worked in private equity, says that most young married couples still live with their families — the bedroom is their only place of real privacy.
"The bedroom in India for a lot of people is one of the few safe spaces that is untouched," he explains, describing it as a couple's "oasis". 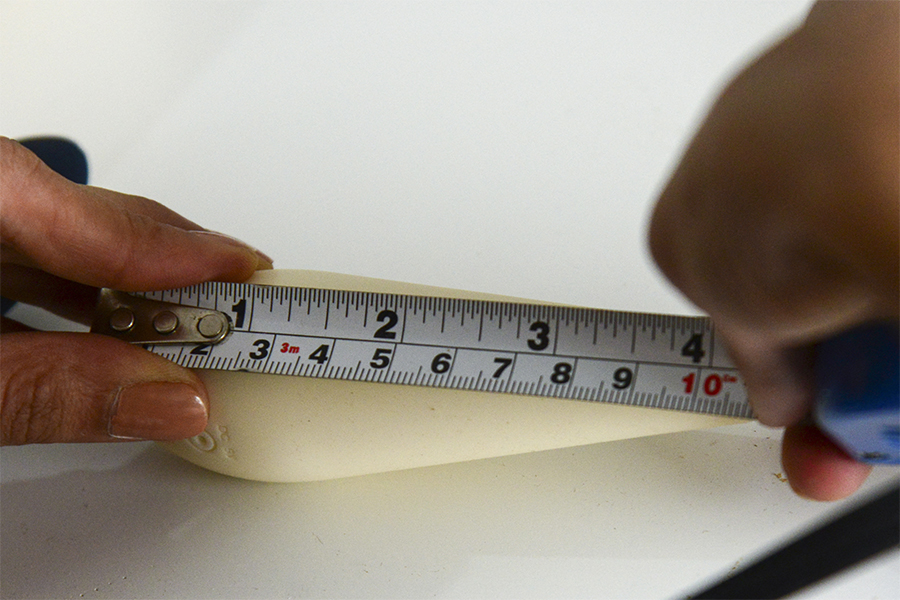 Beyond challenging social norms, this new wave of start-ups see an opportunity for a "sexual wellness" industry in India. (Credit: SUJIT JAISWAL/ AFP)
MyMuse already sells bespoke candles and plans to expand into clothing and offer sex counselling services, while Gizmoswala is set to manufacture and export its own-brand toys to other South Asian nations.
Smartphone proliferation and easy access to modern Indian dramas such as Netflix hit Lust Stories are also tackling taboo subjects like same-sex relationships and casual dating, helping to normalise conversations about intimacy.
Requesting anonymity, one 32-year-old professional, says of the shift in attitudes: "It's exciting that this is finally happening in India. The conversation around sex is really changing."
By Nivrita GANGULY
© Agence France-Presse

Tweets by @forbesindia
Netflix shares drop 25% after service sees first subscriber loss in a decade
Sales numbers are up? It may only be inflation