For Madhuri Dixit, 'The Fame Game' felt familiar if not the medium

In an interview last month, Dixit discussed the pervasive nature of stardom and the changes Bollywood has undergone during her career 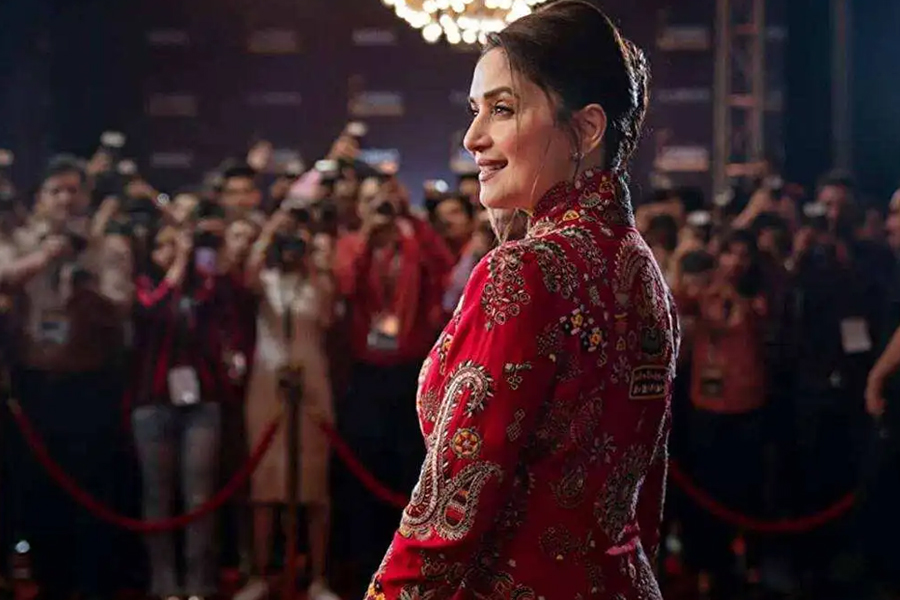 But for director and screenwriter Sri Rao, Dixit was more than a Bollywood megastar. Rao grew up in a small town in Pennsylvania with parents who once called India home, and Bollywood became a link between the cultures that defined him. Years later, Dixit’s outsize celebrity inspired Rao to create “The Fame Game,” Dixit’s first regular role in a major streaming series.

“It’s hard for me to adequately describe her to folks who aren’t familiar with who she is, because we don’t have a comparable analogy in America,” Rao said about Dixit in a recent phone interview. “I try to say she’s like Julia Roberts and Madonna and Meryl Streep all rolled into one, because her level of stardom is so far beyond anything that we know of in the West.”

“The Fame Game,” which hit Netflix last month, follows the story of Anamika Anand, a Bollywood star with similar qualities to Dixit’s. Both have fame that has persisted over the years, and both are known for being incredible actors and dancers. In the show, Anand’s life appears to be full of stardom and glamour, but when she suddenly goes missing, the facade quickly begins to crumble. The show has been praised by critics and has appeared in Netflix’s Top 10 most-watched list in more than 10 countries, including India, Pakistan and Australia.

Dixit, whom The New York Times described as the “reigning queen of Bombay’s film industry” in 2002 and a “Bollywood goddess” in 2007, has often tried to avoid labels herself. Around the turn of the millennium, she left India for over a decade, choosing to start a family in the United States. For most of that time, she also kept the film industry at arm’s length. In 2011, she came back to India with her husband and two children — and back to the movies. But for fans, the word “comeback” could never stick; her image back home was still so ubiquitous, it was as if she had never left.

In an interview last month, Dixit discussed the pervasive nature of stardom and the changes Bollywood has undergone during her career. These are edited excerpts from the conversation.

Q: What was it like doing a series instead of film?
A: When you do a series, you get a lot of time to develop not only your own character but also the characters around you. They have their own little stories, and all the relationships come through beautifully because every character is developed. I think it becomes a more fascinating watch.

Q: How much do you and Anamika have in common, and how did your experiences influence how you portrayed her?
A: On the surface, Anamika and I are very similar in the sense that we are big stars, and she’s also had a lot of experience in a field I have worked in for so long. I have a family and kids, and I’m a wife, daughter, a mother, all those roles. But her experiences are very different from mine because I was very sheltered. I had a mom who was very caring and very protective, and Anamika’s mother is more domineering. I love playing her because her journey is so different from mine.

Q: This is one of the only streaming series that has focused on the underbelly of Bollywood. How realistic did that portrayal feel to you?
A: Anamika is still stuck in that era where everything was dumped on you basically, like: “You have to do this. You have to look a particular way. You have to behave a particular way.” And I think with me, I had a little more freedom to choose what I wanted to do. I got opportunities to work with very good directors and scripts that were very, very forward for that time.

Anamika is caught in that world where it’s very patriarchal. Now she’s trying to create that space for herself and she is struggling not only with that, but also with her family issues and everything. So her journey has been different, but in the show there are a lot of comments on the industry that are very real.

Q: How has the industry changed since your earliest days?
A: I was lucky to get roles where the woman was the center of everything, even though when I started off, it was a very male-dominated industry. The only females on set used to be me, my hairdresser and whoever was playing the female characters in the movie. Now when I walk into a set, I see women everywhere in every department, whether it’s the [director of photography], or it’s a makeup artist. Today you see women behind the camera, women directors, and there’s a lot of power women have now.

Q: What has made Hindi cinema, and maybe India at large, more open to being by, for and about women?
A: I think society has changed in general. I remember when we used to talk about a female-centric film, it used to be either someone who’s a victim and who rises up in the end, or someone who has been wronged and is going to avenge her modesty. But today, women are seen and perceived in a different way. Their characters are someone who helped to launch the rocket to Mars, someone who was a great mathematician, someone who’s a great sportswoman. Women are playing different roles [in society], and the writers are writing roles to that effect. Women stepping into writing or directing has also changed a lot. The thinking is changing slowly.

Q: There are allusions to moments from your actual career in the series, like your signature dance move from the song “Channe Ke Khet Mein” in the film “Anjaam.” Do you have a favorite reference from the show?
A: It’s interesting you should ask me that because [comedian] Lilly Singh put a video on Instagram [of herself watching a scene] when I was on-screen getting a kid to do the move. [Singh] got up and just started dancing. I think that’s the kind of euphoria and nostalgia and everything we are looking for. People should just go out there and watch it and enjoy themselves and think of what they like about Bollywood or what they have appreciated. That kind of response is really heartening, it’s fun, and it’s wonderful to watch.