In a short span of five years in the Malayalam film industry, the 25-year-old actor has worked with a number of reputed filmmakers, delivering back-to-back successes including The Great Indian Kitchen, Malik, One, and Nayattu 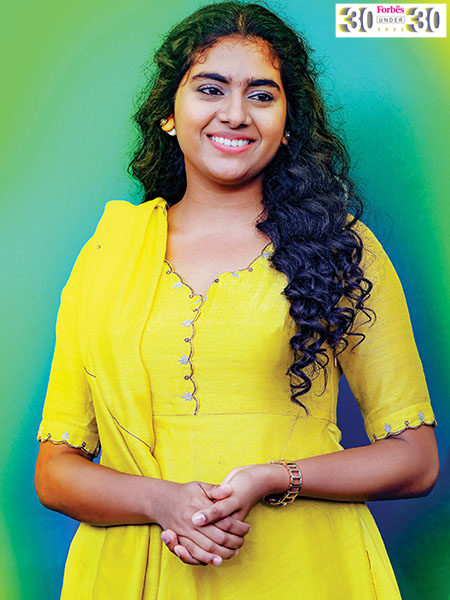 Cinema is an art, and when it has a tinge of political or social issues, the value of it gets bigger, says Nimisha Sajayan.

The 25-year-old actor, in a short span of five years in the Malayalam film industry, has worked with a number of reputed filmmakers, including Rajeev Ravi, Mahesh Narayanan, Madhupal and Dileesh Pothan. The year 2021 was particularly a high point in her career, as she had four back-to-back successes with strong roles in Malik alongside Fahadh Faasil, and director Martin Prakkat’s Nayattu with Kunchako Boban and Joju George, and the Mammooty-starrer One.

There was also The Great Indian Kitchen, which catapulted her to new heights, as the film was acclaimed pan-India for its realistic, accurate and nuanced portrayal of everyday sexism, patriarchal attitudes at home and invisible domestic labour of women. “I want to be part of films that make people think, films that excite them and which they find relatable. I want to be true to what I do, and not play a character just for the fun of it,” Nimisha says.

The actor, who completed her schooling and college in Mumbai and is currently based in Kochi, made her debut with Pothan’s film Thondimuthalum Driksakshiyum in 2017. Her performances in Sanal Kumar Sasidahran’s Chola, and Madhupal’s Oru Kuprasidha Payyan won her the Kerala State Film Awards in 2019. It was through the latter, apart from her debut film, that Nimisha caught the attention of Jeo Baby, director of The Great Indian Kitchen.

“There is a spark in her,” says Baby, who believes that Nimisha will have a long and bright future, because she pursues strong characters, irrespective of a role’s length, and whether or not it is the female lead. “On sets, she is full of energy, joy and laughter, but when the camera starts rolling, she gets into her character so effortlessly.”

For Nimisha, the portrayal of a character is a collective process that involves the space, the props, the costumes and the co-actors. She has now signed two Hindi films, including filmmaker Onir’s We Are. She is working on a British-Indian project Footprints on Water alongside Adil Hussain, and this year will also see her in Malayalam films Thuramukham, Oru Thekkan Thallu Case and Chera.

Method acting is not cut out for her, she says. “The characters that I do are so intense and mature, whereas I am very childish,” Nimisha explains. “If I do too much research or work on the process a lot, it gets mechanical for me. So I just go between action and cut.”

Tweets by @forbesindia
Exercise and eat healthy: Stay active and independent
Storyboard18 - From 'Hamara Bajaj' to the world's favourite Indian, the true legacy of Rahul Bajaj