Postal workers and food, ecommerce, other delivery executives worked through the lockdowns even at the peak of the pandemic to deliver medicines, food and other essentials to people's doorstep 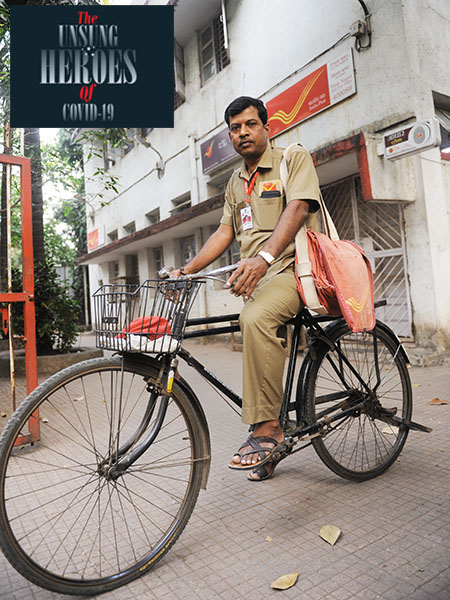 Pradeep Sahu, a postman for the past 25 years, feared for his life, but kept working through the lockdown
Image: Mexy Xavier

More than dealing with the pandemic itself, it’s the loss associated with the scourge that makes Pradeep Sahu anxious. A month into the nationwide lockdown starting March, a diabetic colleague working with him in the postal department for the past four years succumbed to the coronavirus. Around two weeks later, a retired colleague who was battling cancer also passed away after contracting Covid-19.

Sahu, 54, has been working with India Post for the past 25 years, cycling to areas around Tilak Nagar, Chembur, Govandi and Kurla in Mumbai to deliver letters and parcels. He is a familiar face among residents, and most deliveries are accompanied by a friendly exchange or banter.

But for the first time in over two decades, his job—and the fact that he was required to keep working no matter what the losses or repercussions—scared him. “Hum toh darr darr ke delivery kar rahe the [I was working in fear],” says the father of three children, talking about the panic he experienced within and around him, mainly because no one knew how things would unfold.

Between losing his friends and colleagues to the coronavirus and continuing to work despite the severity of the outbreak, Sahu says the postal service, which faced a downturn over the years, was looking at a brief moment of revival. The importance of the last-mile reach of postal workers across the country was reinstated in the age of digital ecommerce deliveries.

The Department of Posts, with 156,600 post offices, is one of the largest postal networks in the world. With 90 percent of them located in rural areas, it became a dependable option for urgent deliveries of essential commodities during the lockdown, especially since private delivery options were restricted. 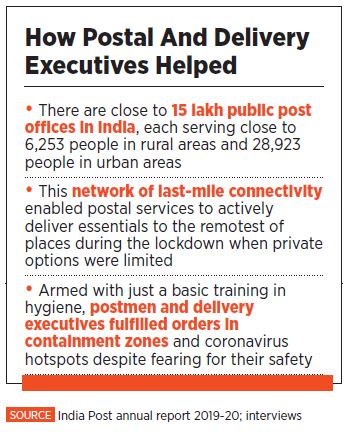 Sahu says through the lockdown he and his colleagues delivered emergency medicines, PPE kits, government papers and even cash door-to-door. “If it was a regular, non-urgent package and the phone number of the recipient was mentioned, we used to ask them to collect the parcel from the post office,” he says, adding that he used to deliver—and still does—between 30 and 40 articles every day.

After his colleague died in May, Sahu and other employees of the Tilak Nagar post office were given 15 days off for quarantine. But after that it was business as usual. “We were trained to maintain sanitation and hygiene and initially worked in rotation. But since July, we were all asked to report to work with 100 percent staff capacity,” says Sahu. When he says 100 percent capacity, he means that 11 people do all the work in a post office where 11 more posts are lying vacant. “We don’t know if people will be hired at all. So to ease the burden, we have asked seven-eight youngsters to help us out at a daily wage of about ₹400,” he says.

Working through the lockdown also gave Sahu a glimpse into people’s psychology, and how they acknowledged those who helped them putting their own lives at risk. His experience was largely positive. “I have been delivering letters in localities for many years now, so most people were very thankful that I braved the lockdown to bring them their parcels. They inquired after my health and asked me to be careful, and it felt good to see that they were concerned about my safety,” he says.

That said, not all delivery executives received consideration and concern. Tripti Santosh Swami (37), a resident of Goregaon in Mumbai who runs deliveries for social enterprise Hey Deedee, had orders from inside containment zones where residents refused to come out of their gates to collect parcels and instead expected her to enter their buildings or societies. “But we were given strict instructions to follow contactless delivery for our own safety,” she says.

Swami says she often found solidarity among the cops, who, like her, were on duty and patrolled the streets to ensure people followed lockdown regulations. “The police used to stop and question what we were doing outside, but when they realised we were delivery executives, they appreciated how we women bravely left our homes every morning to keep working.” Hey Deedee employs only women to conduct last-mile deliveries. In the Worli hub that Swami reports to, there are close to 17 women conducting deliveries in vans and two-wheelers.

She says earlier, every driver was accompanied by a delivery associate, but since lockdown rules allowed only one person in a vehicle, the women travelled by themselves. Driving her van across the 6 to 8 pin codes that her Worli hub services, Swami made between 120 and 150 deliveries daily on busy days. She delivered parcels that included groceries, electronics and fitness equipment, among other things.

Swami has been following the news about the vaccine development process and hopes that once it becomes available to people, she will be able to once again experience all the things that have made her fall in love with her job over the years.

“The team of women I work with was like a family. We celebrated festivals together, dressed up, clicked selfies and even scolded one another when work wasn’t done properly. I drive my van alone these days, hardly get to meet all of them and hang around in a big group. But I hope dheere dheere sab normal ho jaayega [eventually, things should get back to normal].”

Tweets by @forbesindia
Breach of democracy: The violent end of the Donald Trump era
News By Numbers: What we know about Avian Flu that has killed over 2,000 birds