UP Poll Diary, Day 5: In PM Modi's Varanasi, a tale of forgotten promises and missed opportunities 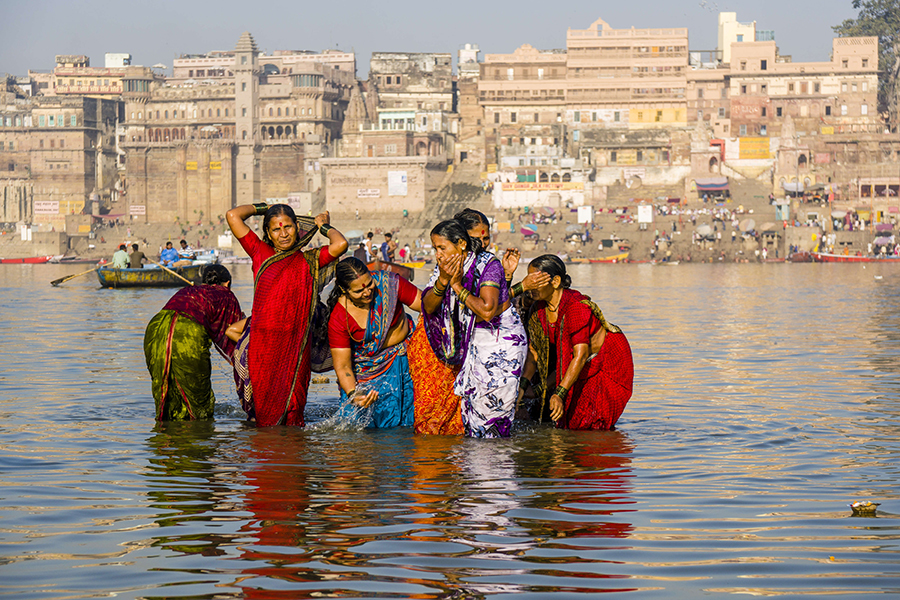 Pilgrims on the sand banks at the holy river Ganges.
Image: Frank Bienewald/LightRocket via Getty Images

On one hand, there are unfounded rumours about Priyanka Gandhi Vadra, All India Congress Committee (AICC) general secretary for Uttar Pradesh East, contesting from Varanasi. On the other, Prime Minister Narendra Modi will fight an assortment for this Member of Parliament seat: 111 farmers from Tamil Nadu, a Border Security Force (BSF) constable, a former high court judge convicted for contempt, a BHU professor Vishwambhar Nath Mishra (who is also a priest), Bhim Army Chandrashekhar Azad ‘Ravan’, among others. Varanasi will vote on May 19, in the seventh and final phase of polls.

Behind the scenes of all the political action—and ironically, also at the centre of it—are the women of Varanasi who occupy about 45 percent of the total electorate. Although being wooed with promises of safety, employment and increased political representation, aspirations of the women occupying the lower rungs of the economic order remain unfulfilled.

While there is general disappointment over the BJP’s unsuccessful implementation of ambitious ‘Namami Gange’ programme of cleaning up the Ganga river, many farmers, weavers and workers across PM Modi’s constituency are still waiting for welfare schemes to reach them.

Kausalya, a landless labourer from the Gaura village of Varanasi, says, “I keep working for hours in the farm, worrying about paying off our debts in time. When I am struggling to get food on my family’s plate, how much time do you think I can waste in comparing political parties or candidates?”

‘Modi might not be corrupt, but people in his administration are’ 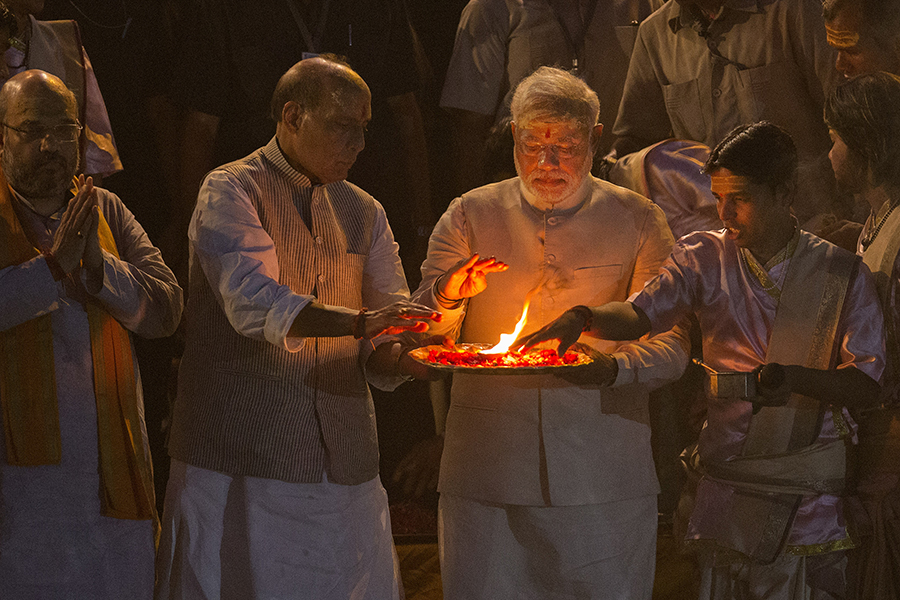 One sunny afternoon in Varanasi’s Chiraigaon, 58-year-old Susheela and her husband Satyaparakash are weaving fabric on a handloom lodged in a corner of their one-room home. The Benarasi saree they are working on, the latter says, takes about 30 days to complete, if they work 10 hours a day. The duo claim to be among the last of the 30,000-odd bunkars (weavers) in Varanasi. Most of their contemporaries have abandoned the craft; some giving in to the competition and commercial demand created by powerlooms, and others, because of the blow dealt to the trade by the government’s demonetisation in November 2016 and the introduction of the Goods and Services Tax (GST) the year after.

The government’s emphasis on handloom weavers is not lost on the old couple, but they have other things to worry about. Susheela says that it has been a decade since her husband has received his pension [under the Handloom Weavers Comprehensive Welfare Scheme]. The local authority has asked him to pay a bribe, which Satyaprakash refused. “I will never encourage a corrupt officer, even if it means not receiving a penny of my pension,” says the 68-year-old. “On one hand, the PM promotes handlooms and on the other, craftsmen like me who spend about a month weaving each Benarasi saree are asked to pay a bribe to receive their pension.”

Susheela says that as a result of this, her sons have left the traditional handloom sector to work in powerlooms, which is riding on commercial demand. “They [local officials] said they will build a toilet in our house, but the corporator has just dumped all the construction material at our doorstep. There is no saying when the work will be done,” she says, complaining that politicians only turn up during elections to ask for votes. “Modi might not be corrupt, but people in his administration are. They are the ones preventing implementation of welfare schemes. The government should address this corruption among local officials and middle-men.”

‘The Modi government will push GI certification in handlooms’ 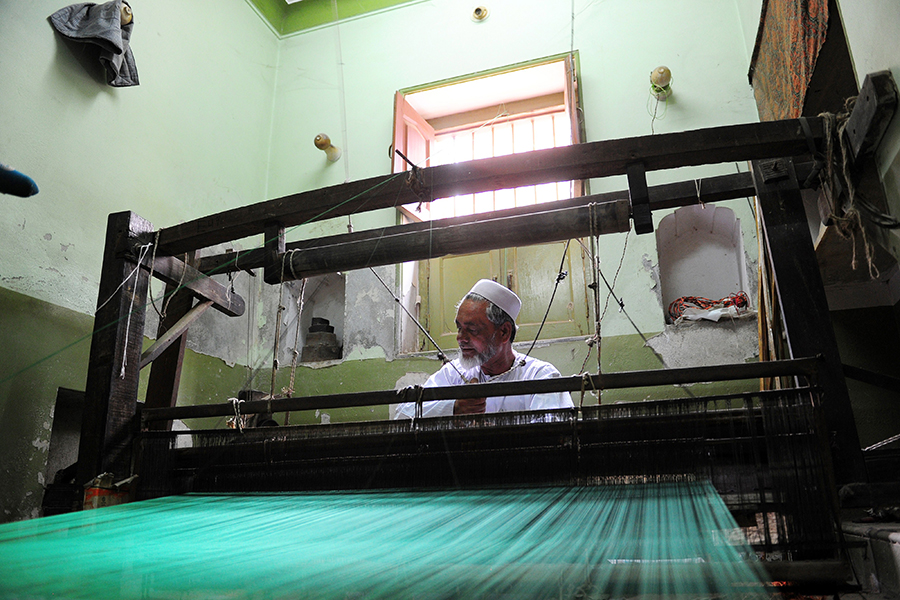 A weaver works on a sari at a handloom factory in Rajapura Varanasi
Image: Sanjay Kanojia/AFP/Getty Images

Activists working with handloom weavers in Varanasi believe that if the Modi government is re-elected, officials will finally leverage the Geographical Indication (GI) certification for hand-woven garments and fabrics, a BJP administration promise since 2014. They say that even though Benarasi sarees received the GI certification a decade ago, its potential has not been fully tapped.

Dr Rajnikanth Diwedi, a former Banaras Hindu University (BHU) professor who runs the nonprofit Human Welfare Association to support weavers and handicraft artisans, says that he has been pressuring the government to provide incentive to traders exporting Banarasi weaves with a Geographical Indication (GI) tag. “This will promote usage of GI certification among weavers, weed out the fakes that enter the market from China and Bangladesh, and standardise income,” he says, explaining that small-scale weavers who cannot have the GI tag should use the handloom mark issued by the government.

Diwedi says that he, along with handloom exporters and merchants, is in talks with the ministry of textile, and trade and commerce to draft a framework for aggressive implementation of GI in Benarasi weaves. “Just like Darjeeling tea has professional packing, labelling, GI tag and barcodes, handwoven fabric could have that too. This will help consumers differentiate between real and fake, and increase revenue for our weavers and craftsmen.”

‘No party is concerned about our lives’
While the handloom sector is struggling to survive, Varanasi’s powerloom setups do not present a rosy picture either. Neetu Maurya from the Gaura village had 20 looms providing sarees to the market earlier. When demonetisation hit, much of her stock remained unsold due to cash scarcity. Then with GST, she was forced to scale down operations and lay off about 10 craftsmen. Powerloom workers are given between Rs 150 and Rs 200 per day. “We are left with 10 looms now, and are taking each day as it comes. Voting seems like an aside when my priority is to ensure stable livelihood for my family, which politicians across parties do not seem to be concerned about.”

In the same village, Kausalya, the landless agricultural labourer quoted earlier, says that she toils for countless hours every year to grow gehu (wheat), dhaan (rice) and phool (flowers) in the land that she has loaned from the local zamindar. Like her, many landless labourers in the village have two problems: While shouldering the burden of high rents demanded by the land-owning zamindar, they live in the fear of the farm being snatched away the following year, to be given to “someone who is ready to pay more.”

Kausalya hopes to have a farm of her own in the future. Today, however, that seems like a distant dream. “Water scarcity is a huge problem in our village, and groundwater levels are reducing. Water from the nearest pump does not reach my farm. We have to pay the zamindar, and if the crop fails, we will be under financial stress. The government has to help us improve the water situation here,” she explains, saying, “Sometimes, I wonder if they even care. Gareebon ke baare mein kaunsa neta sochta hai [which politician has ever worked for the poor]?”

Tweets by @forbesindia
Bionic Yantra: The robot giving patients a leg up
When I said I was a makeup artist, people would roll their eyes: Bobbi Brown