Bionic Yantra: The robot giving patients a leg up 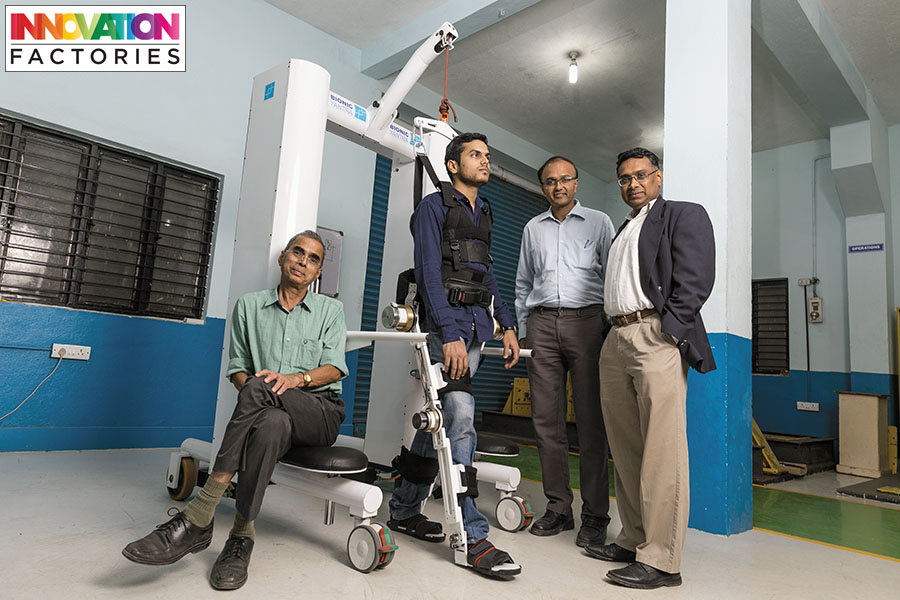 Vaidy Narayanan had seen his 27-year-old cousin suffer from an auto-immune condition (Transverse Myelitis) that caused his spinal cord to collapse, leaving him paralysed. Inspired by a woman skier who was paralysed but walking because of a robotic exoskeleton at the opening ceremony of FIFA 2014, Narayanan thought he could make his cousin walk again.

In January 2017, Narayanan, 49, along with his colleague Shiva Nagarajan, 46, set up Bionic Yantra in Bengaluru, to manufacture robotic rehabilitation exoskeletons for those unable to walk because of injuries and ailments. Narayanan is an engineer who had earlier worked in the software industry, while Nagarajan, an IIM-Lucknow graduate, was in financial services.

“Vaidy had approached Dr Arun Jayaraman of the Rehabilitation Institute of Chicago [now known as Shirley Ryan Ability Lab, SRAL], one of the leading rehabilitation hospitals. After speaking to him, we realised that exoskeletons can be very useful. Around 2011, the price of one wearable robotic exoskeleton in the US [they weren’t available in India], was about $200,000. We took it as a challenge to make it affordable,” says Nagarajan, founder and director, Bionic Yantra.

After six months of research across India, they realised there was enough demand for the exoskeleton, but doctors were sceptical about the quality and price, and wondered if such cutting-edge technology could be brought here. In 2017, Bionic Yantra signed a three-year collaboration agreement—covering safety validation of design, assistance in trials, protocols and training—with SRAL.

For a person who cannot walk, the biggest fear during rehabilitation is falling. Bionic Yantra’s target was to take such fears out of the equation.

The novelty of its product, Robotic Exoskeleton Assisted Rehabilitation System (REARS), is its design. Girish Mudgal, director of Noida-based Timetooth Technologies, and his team are the brain behind REARS’ fall-proof technology, which includes a mobile robot along with a wearable exoskeleton controlled by doctors through a common system.

“It is like converting a complicated installation into a simple frame. Usually, installing a separate overhead fall-safe harness can cost up to $1 million. The exoskeleton itself is a lot lighter [12 to 15 kg instead of the usual 25] and because of the frame the patient cannot feel its weight,” says Mudgal, adding that the innovation can help doctors move into new forms of therapies, such as step-training.

REARS borrows from SRAL’s Lokomat rehabilitation exoskeleton’s design, whereas the latter includes a treadmill on which the patient walks, it makes the patient walk on the ground, which is considered more effective. Other rehabilitation exoskeletons, such as Rewalk and Ekso Bionics, also provide on-ground walking, but do not have REARS’ 100 percent fall-safe mechanism.

REARS is equipped with sensors to capture data such as the maximum and minimum speed of walking, number of steps taken, range of motion of the knees and hips, and provide a report at the end of every session. “The data not only helps understand the patient’s progress, but also detects patterns through machine learning and artificial intelligence,” Nagarajan adds.

The founders emphasise on the importance of getting a patient to walk in the first few days itself. “If you lose that time, the body loses its ability to rehabilitate further. But doctors don’t make them walk, because they are worried about them falling,” says Narayanan.

The device can be used for anyone who has trouble walking or standing up. “It could be acute cases like a spinal injury, or conditions such as knee replacements or obesity. As of now, the device is meant for only commercial purposes, but we are working on a version that can be used at home, with a separate set of specifications for the elderly,” says Dr CS Kedar, director, Bionic Yantra.

Narayanan and Nagarajan faced their share of challenges too. “One is scepticism. People would not believe us when we told them about our product. And second is funding, we had a tough time getting funding because of people’s disbelief in the product,” says Nagarajan.

So far, Bionic Yantra has raised ₹10 crore, including a seed funding of ₹50 lakh from Social Alpha. “With a significant portion of our population living with some kind of disability, it has become more important to look at technology innovations that can address the issues related to access, productivity and unemployment for persons with disabilities. Bionic Yantra is one of our most innovative portfolio companies and their wearable robotic exoskeleton addresses the issues of locomotor disability,” says Manoj Kumar, CEO, Social Alpha.

REARS will be launched for commercial use by January 2020 and will be priced at ₹25-30 lakh, a third of the price of products available in the market currently.

“Affordability is the key. With time we are hoping to reduce the cost even more. We have managed to do lower prices because of the lesser time span it has taken to make the product and the cheaper cost of labour in India,” says Narayanan.

The company has received approval from the Central Drugs Standard Control Organisation to conduct trials and sell in India. REARS is currently undergoing clinical trials at Sakra World Hospital in Bengaluru.

Tweets by @forbesindia
InMobi wants to glue your attention to your lock screen
UP Poll Diary, Day 5: In PM Modi's Varanasi, a tale of forgotten promises and missed opportunities