An ambitious effort by the WHO to calculate the global death toll from the pandemic has found a total of about 15 million died by 2021 end, more than double the official total of 6 million reported by countries individually. But the release of the staggering estimate has been delayed for months because of objections from India 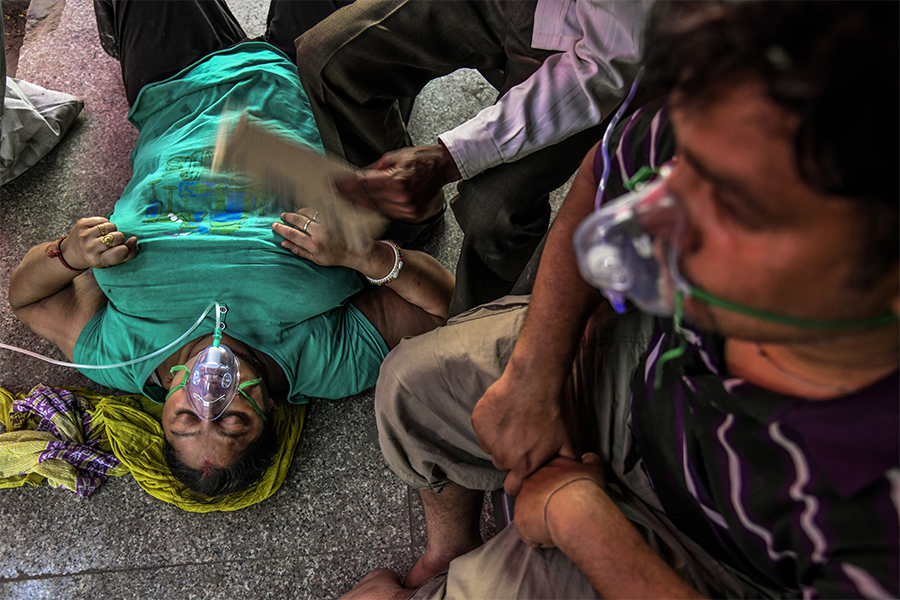 Covid patients receive oxygen provided by a Sikh house of worship on a street in New Delhi, April 25, 2021. The World Health Organization has calculated that 15 million people have died as a result of the pandemic, far more than earlier estimates, but the release of those numbers has been delayed for months because of objections from India, which disputes the calculation of how many of its citizens died. (Atul Loke/The New York Times)

An ambitious effort by the World Health Organization to calculate the global death toll from the coronavirus pandemic has found that vastly more people died than previously believed — a total of about 15 million by the end of 2021, more than double the official total of 6 million reported by countries individually.

But the release of the staggering estimate — the result of more than a year of research and analysis by experts around the world and the most comprehensive look at the lethality of the pandemic to date — has been delayed for months because of objections from India, which disputes the calculation of how many of its citizens died and has tried to keep it from becoming public.

More than one-third of the additional 9 million deaths are estimated to have occurred in India, where the government of Prime Minister Narendra Modi has stood by its own count of about 520,000. The WHO will show the country’s toll is at least 4 million, according to people familiar with the numbers who were not authorized to disclose them, which would give India the highest tally in the world, they said. The New York Times was unable to learn the estimates for other countries.

The WHO calculation combined national data on reported deaths with new information from localities and household surveys, and with statistical models that aim to account for deaths that were missed. Most of the difference in the new global estimate represents previously uncounted deaths, the bulk of which were directly from COVID-19; the new number also includes indirect deaths, like those of people unable to access care for other ailments because of the pandemic.

The delay in releasing the figures is significant because the global data is essential for understanding how the pandemic has played out and what steps could mitigate a similar crisis. It has created turmoil in the normally staid world of health statistics — a feud cloaked in anodyne language is playing out at the United Nations Statistical Commission, the world body that gathers health data, spurred by India’s refusal to cooperate.

“It’s important for global accounting and the moral obligation to those who have died, but also important very practically. If there are subsequent waves, then really understanding the death total is key to knowing if vaccination campaigns are working,” said Dr. Prabhat Jha, director of the Centre for Global Health Research in Toronto and a member of the expert working group supporting the WHO’s excess death calculation. “And it’s important for accountability.”

To try to take the true measure of the pandemic’s effect, the WHO assembled a collection of specialists including demographers, public health experts, statisticians and data scientists. The Technical Advisory Group, as it is known, has been collaborating across countries to try to piece together the most complete accounting of the pandemic dead.

The Times spoke with more than 10 people familiar with the data. The WHO had planned to make the numbers public in January, but the release has continually been pushed back.

Recently, a few members of the group warned the WHO that if the organization did not release the figures, the experts would do so themselves, three people familiar with the matter said.

A WHO spokesperson, Amna Smailbegovic, told The Times, “We aim to publish in April.”

Dr. Samira Asma, the WHO’s assistant director-general for data, analytics and delivery for impact, who is helping to lead the calculation, said that the release of the data has been “slightly delayed” but said that it was “because we wanted to make sure everyone is consulted.”

India insists that the WHO’s methodology is flawed.

“India feels that the process was neither collaborative nor adequately representative,” the government said in a statement to the U.N. Statistical Commission in February. It also argued that the process did not “hold scientific rigor and rational scrutiny as expected from an organization of the stature of the World Health Organization.”

The Ministry of Health in New Delhi did not respond to requests for comment.

India is not alone in undercounting pandemic deaths: The new WHO numbers also reflect undercounting in other populous countries such as Indonesia and Egypt.

India has not submitted its total mortality data to the WHO for the past two years, but the organization’s researchers have used numbers gathered from at least 12 states, including Andhra Pradesh, Chhattisgarh and Karnataka, which experts say show at least five to six times as many deaths as a result of COVID-19.

Jon Wakefield, a professor of statistics and biostatistics at the University of Washington who played a key role in building the model used for the estimates, said an initial presentation of the WHO global data was ready in December.

“But then India was unhappy with the estimates. So then we’ve subsequently done all sorts of sensitivity analyses. The paper’s actually a lot better because of this wait, because we’ve gone overboard in terms of model checks and doing as much as we possibly can given the data that’s available,” Wakefield said. “And we’re ready to go.”

The numbers represent what statisticians and researchers call “excess mortality” — the difference between all deaths that occurred and those that would have been expected to occur under normal circumstances. The WHO’s calculations include those deaths directly from COVID-19, deaths of people because of conditions complicated by COVID-19 and deaths of those who did not have COVID-19 but needed treatment they could not get because of the pandemic. The calculations also take into account expected deaths that did not occur because of COVID-19 restrictions, such as those from traffic accidents.

Calculating excess deaths globally is a complex task. Some countries have closely tracked mortality data and supplied it promptly to the WHO. Others have supplied only partial data, and the agency has had to use modeling to round out the picture. And then there is a large number of countries, including nearly all of those in sub-Saharan Africa, that do not collect death data and for which the statisticians have had to rely entirely on modeling.

Asma of the WHO noted that 9 out of 10 deaths in Africa, and 6 out of 10 globally, are not registered, and more than half the countries in the world do not collect accurate causes of death. That means that even the starting point for this kind of analysis is a “guesstimate,” she said. “We have to be humble about it and say we don’t know what we don’t know.”

To produce mortality estimates for countries with partial or no death data, the experts in the advisory group used statistical models and made predictions based on country-specific information such as containment measures, historical rates of disease, temperature and demographics to assemble national figures and, from there, regional and global estimates.

India’s effort to stall the report’s release makes clear that pandemic data is a sensitive issue for the Modi government.

“It is an unusual step,” said Anand Krishnan, a professor of community medicine at the All India Institute of Medical Sciences in New Delhi who has also been working with the WHO to review the data. “I don’t remember a time when it has done so in the past.”

Ariel Karlinsky, an Israeli economist who built and maintains the World Mortality Dataset and who has been working with the WHO on the figures, said they are challenging for governments when they show high excess deaths.

“I think it’s very sensible for the people in power to fear these consequences,” Karlinsky said.

Tweets by @forbesindia
Markets refuse to sell off. What is driving this?
Photo Of The Day: Easter amidst war