Ukrainians told to shelter after leak at ammonia plant

Sumy regional governor Dmytro Zhyvytsky said there had been an "ammonia leakage" at the Sumykhimprom facility, affecting an area within 2.5 kilometres (1.5 miles) of the plant, which produces fertilisers 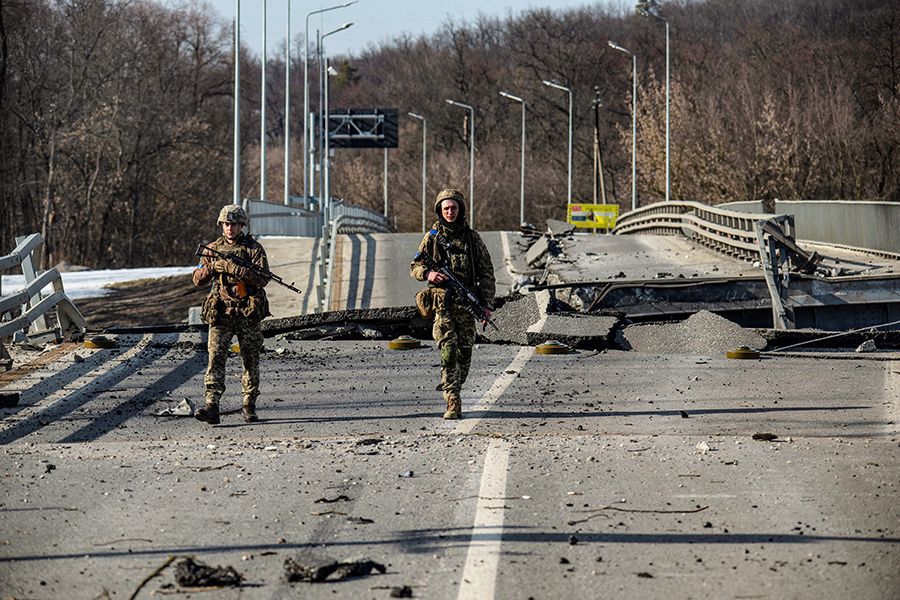 Ukrainian service members walk next to a destroyed bridge between the towns of Trostianets and Okhtyrka amid Russia's attack on Ukraine continues, in the Sumy region, Ukraine March 19, 2022. (Picture taken March 19, 2022) (Credit: Iryna Rybakova/Press service of the Ukrainian Ground Forces/Handout via REUTERS)

Kyiv, Ukraine: Residents of the northern Ukrainian town of Novoselytsya should seek shelter after an ammonia leak at a nearby chemical factory, an official said Monday, as intense fighting with Russian forces in the area continues.
Sumy regional governor Dmytro Zhyvytsky said there had been an "ammonia leakage" at the Sumykhimprom facility, affecting an area within 2.5 kilometres (1.5 miles) of the plant, which produces fertilisers.
The extent and cause of the incident was not immediately clear, but residents were told to seek refuge in basements or on lower levels of buildings to avoid exposure.
"Ammonia is lighter than air, therefore shelters, basements and lower floors should be used for protection," Zhyvytsky said in a Telegram message.

He added that emergency crews were at the scene and prevailing winds meant the nearby city of Sumy — with a pre-war population of around 250,000 — was not under immediate threat.
According to Sumykhimprom's website the facility produces a range of chemical fertilisers.
Sumy, about 350 kilometres (220 miles) east of Kyiv, has experienced weeks of heavy fighting.
In recent days the Russian government has intensified propaganda and disinformation efforts alleging Ukraine is preparing to use improvised chemical weapons and has been developing a clandestine WMD programme.
The Russian Ministry of Defence claimed late Sunday that "nationalists" had "mined" ammonia and chlorine storage facilities at Sumykhimprom "with the aim of mass poisoning of residents of the Sumy region, in case of entry into the city of units of the Russian Armed Forces".
Russia has repeatedly denied helping Syria use chemical weapons in multiple attacks against its own citizens during the country's 11-year-old civil war.
Moscow has also denied using chemical weapons against Russian opposition leader Alexei Navalny as well as ex Russian spy Sergei Skripal and his daughter Yulia.
© Agence France-Presse

Tweets by @forbesindia
How Metro Brands is evolving into a future-ready business with Farah Malik Bhanji and Alisha Malik
The internet is awash in positive product ratings. Here's how to decipher the good from the great