How green is my fertiliser? 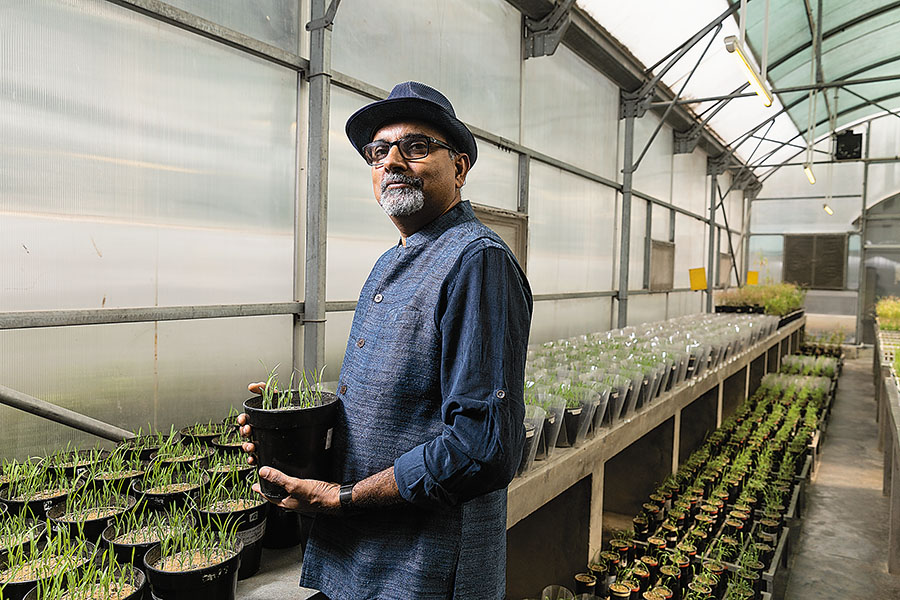 On an average, a farmer in India has to use about 100 kg of various conventional fertilisers to grow 1 acre of paddy. While some part of the fertiliser is absorbed by the plants, the rest leach through the soil into the ground water, thus going to waste and causing pollution. If the farmer uses a nano-fertiliser, she will need only a few grams for 1 acre; the crop will have a higher yield because it absorbs almost all the nutrients from the fertiliser, there will be no wastage, and, therefore, no soil or water pollution.

Working towards researching and manufacturing these nano-fertilisers for a variety of crops is the TERI Deakin Nano-Biotechnology Centre in Gurugram. It has field-tested some of these fertilisers, and found improvements in the crop yields of tomatoes, paddy and soybean, and is conducting further field trials in many states across India.

The Centre was established in 2010 as a collaboration between Indian research think tank The Energy and Resources Institute (TERI) and Australia’s Deakin University, with the aim of identifying and developing new ways of producing farm profitability through nano-biotechnology while conserving natural resources.

Scientists believe nano-biotechnology holds the potential for reviving the agriculture and food industries, as well as improving the livelihoods of those who work in these sectors. “A categorical shift can be brought about by applying nano-biotechnology to the challenge of sustainable food production, increasing use-efficiency and yields,” says Alok Adholeya, director of the Centre.

The TERI-Deakin University partnership evolved as a response to a growing need for solutions to problems in food, agriculture, environment, and bioenergy, says Ravneet Pawha, deputy vice president (global) and CEO (South Asia) at Deakin University. It brought together the university’s expertise in nano-materials with the experience of TERI in biotech applications. The Centre has worked in the areas of food security, increasingly changing climates, remediation of polluted environments through natural products, improving health through novel molecules, and improving the quality of life for poor communities, she adds.

Since its inception, the Centre has made significant strides in developing nano-nutrients, nano-pesticides and nano-formulations as targeted solutions for global challenges such as soil health, food security, and water safety, Adholeya says. The Centre is preparing to commercialise its products, and has validated its technologies and manufacturing processes for safety and other norms based on OECD’s and India’s guidelines. It is also getting ready to ramp up manufacturing.

A number of global trends is influencing food security, poverty and the overall sustainability of food and agricultural systems. The world’s population is expected to grow to almost 10 billion by 2050, boosting agricultural demand—in a scenario of modest economic growth—by some 50 percent compared to 2013. Income growth in low- and middle-income countries would hasten a dietary transition towards higher consumption of meat, fruits and vegetables, relative to that of cereals. This will require corresponding shifts in agricultural and farm output, which will add to the pressure on natural resources.

Across global regions, there has been a decline in the share of agriculture in total production and employment. Therefore, satisfying the increasing demand for food with existing farming practices is likely to lead to more intense competition for natural resources, increased greenhouse gas emissions, and further deforestation and land degradation. For this, there is a need for innovative products such as nano-fertilisers, Adholeya says. Greener products can improve land productivity, reduce soil erosion, help prevent loss of biodiversity, and reduce toxicities. 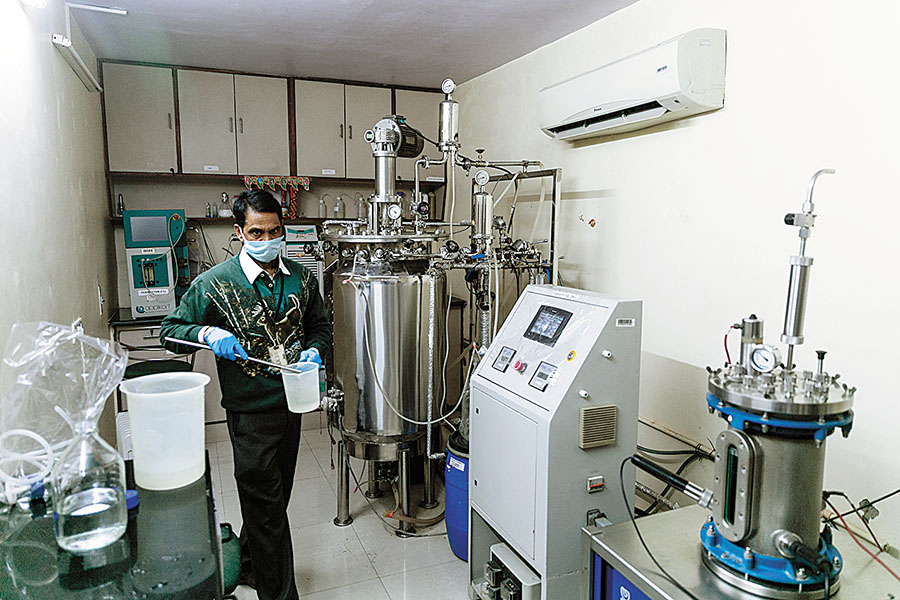 The TERI Deakin Nano-Biotechnology Centre, which has developed multiple nano-fertiliser products, has set up a 1,000-litre bioreactor facility to manufacture them
Image: Madhu Kapparath

How nano-fertilisers work
One of the characteristics of nano-fertilisers is the minute dimensions of 50-100 nm of each fertiliser particle. At that scale, scientists say, the amount of surface area a given quantity of fertiliser has is much higher compared to regular fertilisers.

This higher surface area-to-mass ratio makes nano-particles more amenable for a variety of uses, such as nano-transporters of anti-microbial drugs. In the nano-fertilisers that the TERI-Deakin Centre is developing, nutrients that are added, either alone or in combination, get attached to these nano-particles, and are then released very slowly into the soil. This method not only increases the efficiency of nutrient use, but also minimises extra nutrients leaching into the ground water, getting wasted and causing pollution.

The Gurugram Centre has been able to develop multiple nano-fertiliser products, and is now ready to introduce two of them—nano-phosphorus and zinc-iron nano-composite—in the market, after conducting multi-location field trials, with multiple crops. “Highly beneficial effects were recorded by application of very small amounts of these nano-fertilisers in comparison with conventional and commonly used fertilisers,” says Adholeya. Crop yield increased for tomato (by 34 percent), paddy (by 15 percent) and soybean (by 23 percent) by applying the fertiliser once to the leaves of the plants before they began to flower. The results show that nano-fertilisers can reduce the need to apply phosphorus fertilisers (to the soil) by at least 25 percent, and as much as 50 percent in different types of crops.

It has also been able to develop other nano-fertilisers, including nano-PK (phosphorus, potassium), nano-sulphur, nano-magnesium, nano-boron, nano-copper and nano-molybdenum products, which are currently at a validation stage. These products have been tested as per OECD and national guidelines, and have been found to be safe and non-toxic to humans and the environment. The production technology for these nano-fertilisers has also passed all the tests at the pilot scale, and the Centre is now ready for mass production.

These fertilisers need to be applied to crops at the rate of only a few grams per acre, raising their value not only for the farmers but across the supply chain. Further, because very small amounts of these need to be given to crops, the threat of carbon footprints are drastically reduced, Adholeya says. “If conventional fertilisers are replaced by nano-fertilisers, it will not only reduce environmental pollution, but also offer an alternative to fertiliser imports.”

The way ahead
The TERI-Deakin Centre has industrial collaborations that involve contract research, field testing, product validation, quality testing, and technology transfers. It has set up a 1,000-litre bioreactor facility on its campus in Gurugram to manufacture these products. This facility has been created under a National Centre of Excellence for Advanced Research in Agriculture Nanotechnology, funded by the Department of Biotechnology, Government of India. The Centre has also established a national facility for nano-toxicity assessments.

The Centre focuses on researching how to increase water quality, encourage efficient farming practices, improve waste management, and design innovative, agriculture-dependent, cost-effective ways to treat human diseases. It works closely with the government and industries to identify problems that can be solved through nanotechnology. In the last decade, it has produced over 120 research publications, has been granted eight patents and has made five new applications, and 26 externally funded projects to its credit.

The research and the resulting technologies and products are being sought by industries internationally, says Pawha of Deakin University.

Going forward, the Centre plans to address regulatory issues in the areas of nano-nutrients and biological products to ensure that the global farming community gets high-efficiency and quality products, while addressing environmental and safety concerns.

In India, agriculture remains one of the central pillars of the economy; it is the source of income for almost 58 percent of families and employs 44 percent of the country’s workforce. The annual growth rate in real terms in agriculture and its allied sectors was 2.88 percent between 2014-15 and 2018-19, according to India’s Economic Survey 2019-20. India’s government-backed think tank NITI Aayog estimates that agriculture will grow at 3 percent in the current fiscal year. The annual per capita food grain availability in India declined from 186.2 kg in 1991 to 179 kg in 2019. Such declining trends pose concerns for the country’s food and nutritional security.

What is needed is a transformative process towards holistic and integrated approaches, which are built upon indigenous and traditional knowledge, Adholeya says. The TERI-Deakin Centre is building such processes with its nano-technology-based solutions, which are cost-effective and environment friendly.

Tweets by @forbesindia
Photo of the Day: Fog and fogging
50 years on, how Medimix is keeping itself relevant