To assist the farmer and to provide high quality produce to consumers, a number of agritech startups have come up with innovative methods of cultivation and supply chain management 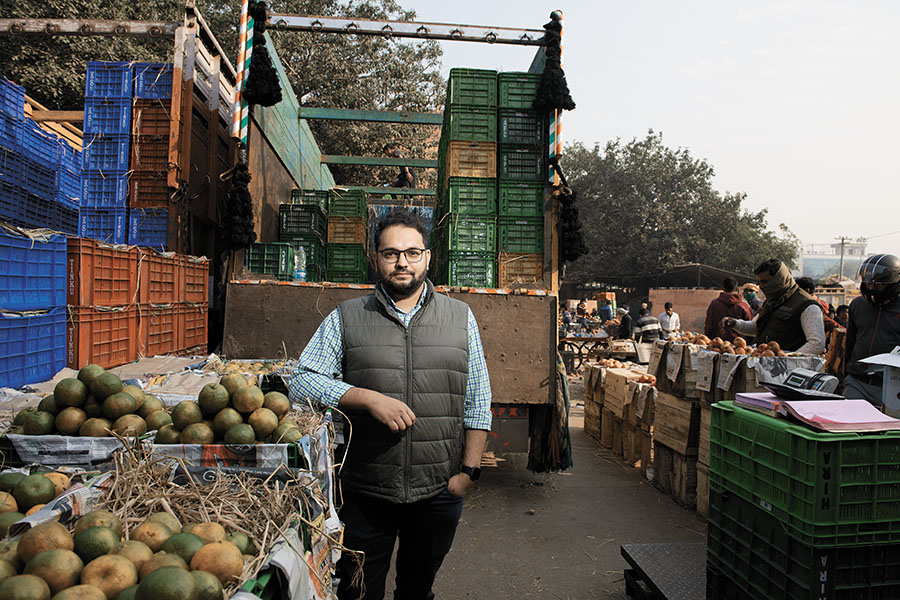 Since the pandemic, India’s agriculture sector has witnessed a number of changes, both at the policy and the operational level. With the disruption in the supply chain due to the nationwide lockdown, there was a rising demand for many essential and perishable items, like fruits and vegetables, dairy products, fish, etc, leading to a mounting pressure on the supply chain.

The reverse migration prompted the government to announce an increase in its budget for the Mahatma Gandhi National Rural Employment Guarantee Act (MGNREGA) by ₹40,000 crore, over and above the existing allocation of ₹61,500 crore. Additionally, the announcement of agricultural reforms, along with the ₹1.5 lakh crore package for agricultural infrastructure that was announced in May—allowing barrier-free inter-state trade of farm produce and farmers to engage with large retailers and exporters, and amendments in the Essential Commodities Act—are clear indications that a boost in agriculture, and consequently the rural ecosystem, might be the key to India’s economic recovery. To assist the farmer and to provide high quality produce to consumers, a number of agritech startups have come up with innovative methods of cultivation and supply chain management. We take a look at some of them:

Bijak: Connecting people
In April 2019, Bijak was launched as a business-to-business (B2B) marketplace for agricultural commodities that connects traders, wholesalers, food processors and farmers. It creates buyer and supplier ratings based on their transaction history to bring transparency and enforce accountability. Besides helping multiple stakeholders in the ecosystem discover each other, Nukul Upadhye, co-founder of Bijak, says, “The platform is also bringing in digitisation of physical mandis, artiyas [commission agents], loaders, and processors by providing them an online interface.” Farmers get access to a mandi-wise list of buyers and suppliers for each of their commodities on the Bijak app, which becomes even more relevant in the wake of the recent farm legislations that throw the sector open to private players dealing directly with farmers.

Like a lot of other agritech players, Bijak’s growth surged due to the pandemic, and the subsequent lockdown. Due to inconsistencies and interruptions in the food chain, it was approached by state governments, Farmer Producer Organisations (FPOs) and NGOs. The startup has been working with them to help procure fresh, perishable produce from farmers who were unable to sell them. “We were able to help our users harness existing relationships and create new ones through our platform—buyers and sellers were able to discover their counterparts sitting in different cities even during the lockdown,” says Upadhye.

Besides, it also tied up with newer players foraying into the agri space, selling fruits and vegetables directly to consumers, as they did not have the capabilities to manage both procurement and distribution. “These companies joined the Bijak platform as buyers and used our network to source commodities from all parts of the country. On the other hand, inputs [fertilisers, seeds etc] companies have the ability to manage the farmer network and procure commodities but do not have the know-how of selling or distributing produce. They joined the platform as suppliers to access our buyer network,” says Upadhye. At present, the startup has 30,000 active buyers and traders on its platform. From a gross merchandise value (GMV) of ₹50 crore in October 2019, the platform has hit an annualised GMV of ₹1,200 crore.

In April 2020, it raised ₹90.76 crore (about $12 million) in its series A funding round, led by Russian venture capital firm RTP Global. Upadhye and his team plan to continue growing in the output and post-harvest space by adding more features to the app and including value-added services like logistics. Says Upadhye, “Agriculture in India suffers from a lack of transparency and information. We are able to bridge that trust deficit, allowing people to trade freely without worrying about price risk and credit risk and aligning incentives with the right behaviour.”

In the wake of the Covid-19 pandemic, the company launched ‘Fasal Kranti’, a plug-and-play, Internet of Things (IoT)- and sensor-based device that doesn’t need technical expertise to operate. The device has over 12 sensors to monitor micro-climatic factors like rainfall, wind speed, wind direction, and solar intensity as well as below-the-soil parameters like temperature and moisture at multiple levels. “It can be deployed in farms within 2 minutes without any additional help. We can ship it to farmers anywhere, be it Nashik or Nagaland,” says co-founder Shailendra Tiwari.

Agriculture in India suffers from a lack of transparency and information. We are able to bridge that trust deficit

Fasal Kranti can also be integrated with any agriculture automation system, like subsurface drip irrigation, to extend its capability into farm automation.

The precision farming startup has developed technologies that are being used all across India, primarily in Maharashtra, Karnataka, Chhattisgarh, Madhya Pradesh, Telangana, and Andhra Pradesh. “There are more than 2,000 farmers with more than 12,000 acres of land, who have benefitted from Fasal’s technology; with Fasal Kranti, we aim to reach 10,000 farmers in the next 10 to 12 months,” says Ananda Verma, co-founder.

“Government policies support a more robust and open supply chain system in favour of our farmers. There has never been a bigger incentive for our farmers to grow more and grow better. And we believe the launch of Fasal Kranti will help in a rapid transition of Indian agriculture where farming is guided by precise, knowledge-based efficiently operated setups,” adds Verma.

The startup, which has received around $2 million in funding from venture capital firms like Omnivore, Wavemaker, Mount Parker, and Mistletoe, plans to expand their operations worldwide. “We are an innovation-driven company, and plan to come up with newer methods and solutions in crop care to build a more sustainable agriculture ecosystem,” says Verma. 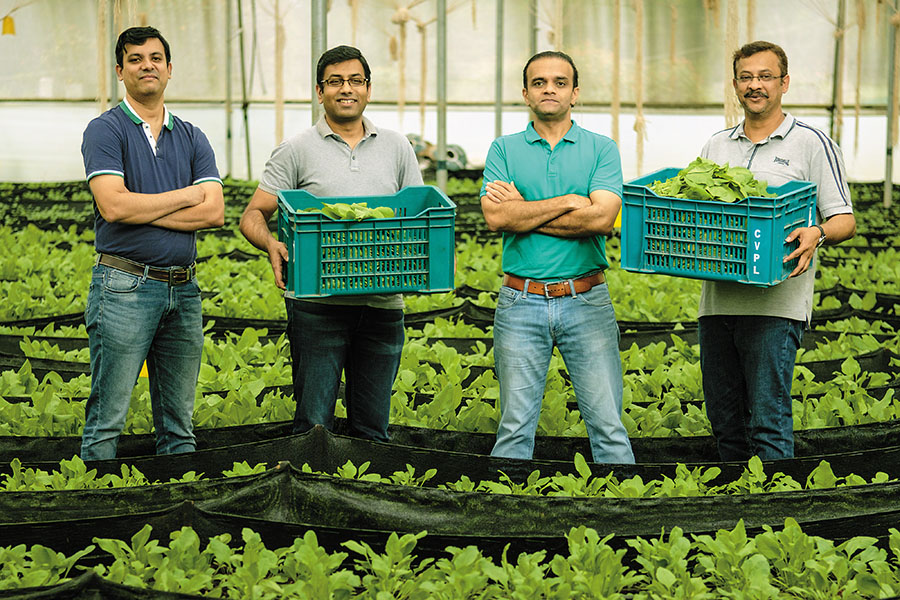 Clover Ventures: greehouse effect
Greenhouse agritech startup Clover Ventures, founded by a group of four friends in 2018, works with about 60 small-scale farmers spread across more than 70 acres around Bengaluru and Hyderabad. The startup is a demand-backed supply chain for perishables, and assists small and marginal farmers in producing high-quality perishable crops.

“We realise the majority of farmers who have greenhouses are unable to use them judiciously as they are grappling with challenges of demand know-how, yield and productivity, and access to markets. We offer such farmers the full-stack agronomy service—assistance on crops, best crop management techniques, fertilisers and pesticides, and other resources to boost productivity. We also focus on a clean and high-quality product for the consumers,” says Avinash BR, co-founder.

Clover, which initially sold fresh produce to B2B clients such as cloud kitchens and fine-dining restaurants, pivoted to supply through business-to-consumer (B2C) channels. “With local markets and large retail outlets closed, kirana stores saw heavy footfalls, and our business pivoted quickly,” says Avinash. Since the pivot, Clover has grown between four and five times in the last three months, he adds.

The startup faced several issues because of the lockdown, such as restrictions on movement of goods. “The process of arranging labour for harvesting, getting our vehicles to reach farms, having enough workers in our warehouse, and delivering to our customers on time became a daily battle for us. This took a heavy toll on the team as we had to revise our plans every hour. Thankfully, now we have learnt to adjust,” says Avinash. “We want to quadruple our managed farm network in the next six to 12 months, both in Bengaluru and Hyderabad.”

Tweets by @forbesindia
Photo of the Day: Fumigation at farmer protest site
William Shakespeare has been vaccinated against the coronavirus. (Yes, you read that right)