50 years on, how Medimix is keeping itself relevant

Legacy soap brand Medimix is adding swag to ayurveda, reimagining itself, and making a transition to become a personal care brand. Will it work?

“There are no failures. There are only challenges, and I’m always looking forward to innovate.” - Pradeep Cholayil, chairman and managing director, Cholayil

It was there in black and white for Pradeep Cholayil to see. The second-generation entrepreneur, who joined the family business of soap making in 1983, knew he was on slippery ground. The rules wouldn’t change. Well, they didn’t till 2005. Young Cholayil had almost exhausted all attempts to persuade his father VP Sidhan to change the iconic ‘red and black’ packaging of the ayurvedic soap brand which the allopathic doctor founded in 1969. The packaging, Cholayil urged, had outlived its utility. The brand now needed to connect with the youth. It needed a makeover. Dr Sidhan, though, wouldn’t budge. He had his reasons. There were brands which got lured, changed packaging, and subsequently lost consumers, and business. The huge downside played heavily on the mind of the founder who had toiled hard to make the medicated brand a household name in South India. Cholayil, however, didn’t give up. He tried to reason for one last time. The timing was apt. “So you moved from an Ambassador to a Benz,” he started a conversation with his father. The old car had four wheels. The new one too has four. “So what made you move to a Mercedes-Benz?” he posed. The message hit home. The soap brand got its first major makeover; red and black made way for lots of green, and the positioning of medicated bar changed to a ‘beauty soap’. Cut to 2019, the golden jubilee year of Medimix. A sense of déjà vu gripped the chairman and managing director of Cholayil, the company owned by Pradeep Cholayil, who got the rights for Medimix in North, East and West India after a split in the family business in 2007. Volumes of the legacy brand were slipping, and value growth had dropped to single digits. Though the brand posted revenue of Rs 200 crore for FY19 and had its share of loyalists intact, it was not able to lure the younger generation.

The challenge was two-fold. First, the youth perceived ayurveda to be ‘slow’. The instant noodle generation wanted a quick fix. Ayurveda, despite scoring quite high on efficacy and credibility, was losing out to cosmetic products which offered speed of use. The second problem was blurring of the line between natural and herbal. This was confusing the consumer. For Medimix, the option was clear: Lead or bleed. Cholayil didn’t waste time. The solution, interestingly, was always there with the legacy brand. Cholayil discovered it now. The soap, which is made from a blend of 18 ayurvedic herbs, always acted fast on the skin. Medimix leveraged its power of potency, functionality of the herbs, recalibrated its approach and came up with an ‘instant result’. Cholayil repositioned Medimix, roped in actor Parineeti Chopra, and lathered up a new message for the millennials: Get SkinFit with fast acting ayurveda. The move, claims Cholayil, has worked. The makeover of the soap brand comes at a time when Medimix is transitioning into a personal care player. It has entered new categories such as body wash, hand wash, shampoo, conditioners, and intimate hygiene wash. “Now we are not just a soap company,” says Cholayil. The company, he lets on, closed FY20 at Rs 220 crore, and is now striking a revenue run-rate of Rs 300 crore in the ongoing fiscal. Cholayil wants more. “I am not satisfied with what I have today. I am always looking to innovate,” he says. 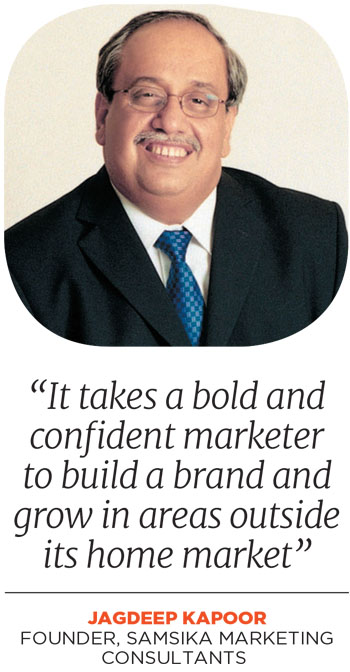 Cholayil’s hunger for growth, reckon branding experts, has been the driving force behind the growth of Medimix. “It takes a bold and confident marketer to build a brand and grow in areas other than its home market,” says Jagdeep Kapoor, chairman and managing director at Samsika Marketing Consultants. Medimix, by venturing out of the comfort zone of South India to the West, North and East has shown courage and a ‘conquering thinking’ and grown in a robust manner. “Cholayil’s agility and adaptability have helped a lot,” he adds. “I took it as a challenge. I felt India is a big market,” says Cholayil, who before the split in the family business had started exploring markets in Maharashtra. He roped in an advertising agency and started rolling out commercials in Marathi. The experiment worked. “The sales grew by 100 percent the year advertising began,” he recalls. Maharashtra turned out to be the stepping stone for the growth of Medimix post 2007. Two factors made Cholayil’s inroads into Maharashtra and other parts daunting. One, Hindustan Unilever was ruling the roost with a slew of its power brands such as Lux, Hamam and Rexona. Two, Cholayil had limited human resources at his disposal. The key members had either quit or preferred to stay in the South with AV Anoop, son-in-law of the Medimix founder who had the rights for the southern markets. Cholayil knew he had to think out of the box. His experience of ‘Medimix time’ in Chennai—advertising on radio at 6.30 in the morning, which was a massive hit—came in handy. He decided to target the rural population, and the best way to do that was to advertise during religious festivals. Act of God Medimix rolled out ‘God cards’. A small-sized card with an image of a God was distributed to visitors during festivals. Such cards, Cholayil underlines, were much better than a pamphlet, which were usually discarded by people. “When you get a God card, you don’t throw it away,” he says. The God stays with the consumer, and the brand—printed on the card—gets into the home. “Some even kept the cards in their wallets,” recalls Cholayil. Quickly, Medimix made inroads into the rural markets. After cards came calendars. Cholayil printed the names of the dealers on the calendars which had images of deities. This helped Medimix generate resources to advertise on television (TV). The commercials, however, were not the regular ones. “They were 10-second ads, talking about skin problems,” he says. During local festivals, Cholayil ensured that such ads ran on TV throughout the day. 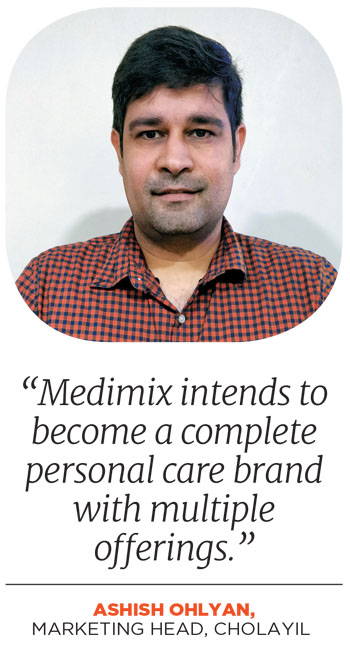 There was no looking back for Medimix, which in the ’70s was sold as a ‘soap recommended by doctors’. Maharashtra is now the biggest market, contributing 40 percent to the business. West India, overall, contributes 60 percent to the revenue. North comes next with 20 percent. The brand now gets exported to 31 countries, including the US and Gulf nations. Cholayil has ramped up marketing spend from low single digits to 12 to 15 percent of the turnover. Apart from the repositioning last year, Medimix also rebooted its marketing strategy. “We identified key districts and rationalised our distributor coverage,” says Ashish Ohlyan, head of marketing. From 2.6 lakh outlets covered in FY15, the brand brought it down to 1.6 lakh in FY19. The distributor footprint during the same time was cut from 868 to 564. “We stopped reaching out directly to the lower contributing areas. This helped us in better focus and planning,” explains Ohlyan. The strategy of building one market at a time was adopted. After Maharashtra, the brand is now focusing on Gujarat and Uttar Pradesh. Though the Baba Ramdev-backed Patanjali expanded the market of ayurveda and gave it a mass appeal—benefitting Medimix as well—the pandemic this year turned out to be a massive tailwind for the category. “Consumers today are hooked on to one solid peg—authenticity,” says Ohlyan. From organic food to natural skin care products to unique Netflix content, they demand originality and ignore gimmickry, he adds. What this means for personal care products is that the attention of consumers has shifted to the ‘back of pack and ingredients’. “They want to know what goes into the products,” he says. This is where a 50-year-old brand Medimix, with proved efficacy and credibility, stands to gain. “With fast acting ayurveda, we are helping users identify the role of efficacy in their lives,” he adds. Can a positioning of ‘Fast Ayurveda’ help Medimix grow fast in terms of revenue? Post-pandemic, almost all beauty soap brands have repositioned themselves and claim to have some or the other ‘natural’ and ‘herbal’ ingredient to protect the skin. Won’t it be challenging for Medimix? “The split in the family was the biggest challenge,” says Cholayil. The son, and the brand he took outside South, survived the existential crisis. Now it is on the fast track, he signs off.

Tweets by @forbes_india
How green is my fertiliser?
Facebook takes the gloves off in feud with Apple