Anushka Sharma's only plan has been to have no plan. And this ability to take things as they come has helped her wear the many hats of actor, producer and entrepreneur 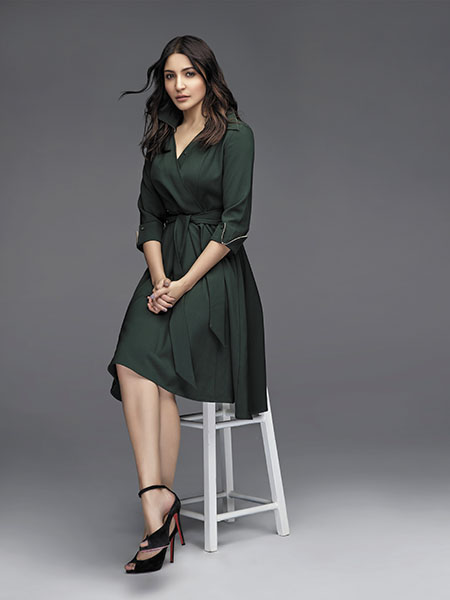 Anushka Sharma has everything that a 29-year-old can ask for. A glittering acting career that began with Rab Ne Bana Di Jodi (2008), fame that allows her to make the choices that she wants to, money that ensures the freedom to live life on her own terms. And above all, confidence and clarity that have been constant companions in her journey to becoming an actor of substance. Yet, it is time for herself that she yearns for. “Right now, my aim is to be able to sleep for seven hours and work out,” she tells Forbes India in a crisp telephonic interview on a balmy Sunday evening in November in Mumbai before rushing to the studios to shoot for filmmaker Anand Rai’s next, which also features Shah Rukh Khan—her co-actor in her first film.

Though she is aware of her hectic schedule and myriad things run through her mind, she does not rush through her answers even once. Every question is met with a concise reply that gives a deep insight into the clear vision with which she deals with tasks at hand. Whether it is enacting the character of a Gujarati girl in Jab Harry Met Sejal (2017), diving into the post-production work of her next home production, Pari, scheduled for a February 2018 release, or overseeing her clothing line NUSH, Sharma has chosen to push the boundaries. It is this approach that has allowed the Ayodhya-born actor to not only blend into a close-knit film industry despite being an ‘outsider’ but also walk the talk.

“God has been supremely kind to me. I never had any plans of becoming an actor and don’t know what I would have done had this not worked out,” says Sharma, who started modelling in her teenage years. “I thought I would model for the rest of my life. But now when I think of it, it’s not something that I would have enjoyed doing for so many years.” Fashion designer Wendell Rodricks was awestruck by her beauty when he spotted her at a denims store in Bengaluru in 2006 and promised to put her on the ramp if she came to Mumbai. “Anushka struck me immediately as a person with star quality. She was a star from the time I set my eyes on her,” he says.

The spark in Sharma, then 19, was also noticed by Yash Raj Films (YRF) honcho and filmmaker Aditya Chopra who offered her Rab Ne Bana Di Jodi after being impressed with her audition. “I auditioned for the film without knowing who the co-actor or director would be. I just happened to give a good audition and was shortlisted for it. Everything happened so quickly… I don’t think I was prepared for what was to come after you become an actor,” recalls Sharma.

“ “When you Set Plans For Yourself, you are just creating boundaries.”

That could be the voice of a newcomer, the daughter of an army officer and a homemaker, far removed from the film world. Today, having proved her mettle as an actor for almost a decade with hits like Band Baaja Baaraat (2010), PK (2014) and Sultan (2016), Sharma is adept at accepting the good with the bad that comes along with stardom. Even if it’s criticism… like she faced from certain quarters for choosing motherhood over pursuing sport in Sultan.

Calling herself a realist, Sharma says she has the ability to cut herself out from such negativity. “You could be winning the Nobel Peace Prize, but there’d be enough number of people to criticise you for what you do. That’s the strange universe that we live in today. To think that everyone is going to like you and people are constantly going to be encouraging of you… you are going to find yourself in constant disappointment,” she says.

The maturity that she displays while dealing with fickleness that renown brings is a result of her evolution as a person, and something that she says has helped her as an actor too. “My personal growth as a human being is of prime importance to me. I do feel that reflects on you as an actor,” she tells Forbes India. “It’s easy to get stuck in a bubble and create a cushy, comfortable environment around you. But it is also a downfall as an actor.”

The individual progress that she refers to is something that her colleagues in the film world also appreciate. Actor Ranveer Singh who made his debut opposite Sharma in Band Baaja Baaraat says: “It’s wonderful to see how far she has come. She was always amazing as an actor, but her craft has gotten more solid. She’s also come into her own as a person. She’s comfortable with herself and clear about her choices.” Both actors have a common mentor in Aditya Chopra, but Ranveer says the YRF boss often cites Sharma’s example to him to do the right things, saying: “Tu nalaayak hai… seekh kuch Anushka se… (You are useless, learn something from Anushka).”

As an actor, she is open to be vulnerable. That’s an essential and a great quality in an actor, says Navdeep Singh, who directed NH10 (2015), the first film made by Clean Slate Films, a production house set up by Sharma and her brother Karnesh in 2014.

Another trait that hasn’t gone unnoticed is her unselfishness. Ranveer hasn’t forgotten the handholding from her during the making of Band Baaja Baaraat. “She was two films old then and knew much more than me. But she was gracious, generous and open-hearted in terms of contributing towards my development. I was completely clueless... I was so raw that it could get annoying, irritating, but she was extremely patient with me. I’ll always be grateful to her for everything that she taught me when I was a rank newcomer,” says the actor.

Neil Bhoopalam, Sharma’s NH10 co-star, expects more surprises from her. He calls Sharma his SRK [Shah Rukh Khan], saying he imbibed a lot from her during the shooting of the film, just as she learnt from the superstar on the sets of Rab Ne Bana Di Jodi. 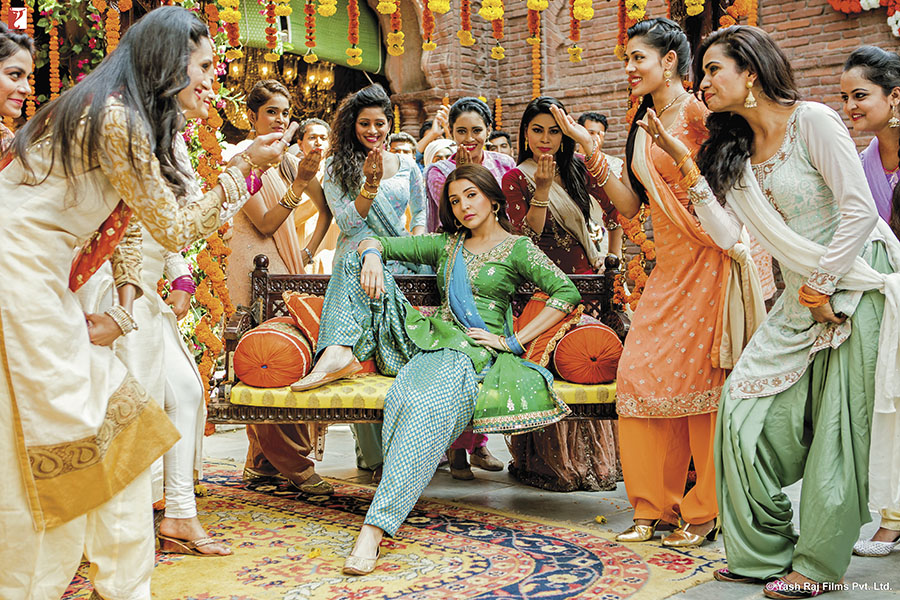 Anushka Sharma proved her mettle as an actor with her performance in Sultan (2016)
Sharma had a dream debut, but she calls Band Baaja Baaraat the turning point of her career. “I wasn’t riding on the back of someone else in Band Baaja… it was on my own merit that I got praise and so much love from people. I owned my success. It wasn’t borrowed from somebody else,” the actor explains. The self-approval only instilled a greater drive in her to do quality work because the first time she saw herself on celluloid, she didn’t like seeing herself on screen.

Others, however, had a favourable opinion. Celebrities like playback singer Sunidhi Chauhan were gushing about her talent. “Whether she’s performing on my songs or acting or doing advertisements, everything that she does on screen, I see an absolute conviction, hard work and focus in her, in her eyes, in the way she portrays herself,” says Chauhan, who has sung chartbusters like ‘Ainvayi Ainvayi’ and ‘Radha’ for Sharma.

As someone who had the opportunity to know Sharma a bit more personally, Chauhan says her humility stands out. “She’s inquisitive about what people think, how they like her work and she wants to make it better each time. She speaks less, especially about her work, and does more,” the singer tells Forbes India. Ranveer calls her a special actor. “She is naturally gifted. She’s an untrained actor for the most part,” he says.

Juggling between multiple commitments can be exhausting, but Sharma does it with the finesse of a professional. “I have been able to do so much because I am open to things. When you set plans for yourself, you are just creating boundaries. I have never created any for myself,” she says.

Singh of NH10 concurs. He says despite being a first-time producer, she was supportive of the film. “That’s important, especially when you are an actor-producer to realise that the film is probably bigger than your part. Often, actors forget that,” he says.

Her screen persona of a charming, lively person extends to real life too. So much so that the child-like enthusiasm in her prompted her to give an impromptu high five to her driver after she was offered PK. Sharma, however, says she is anything but the talkative person that people perceive her to be.

“I am totally shy and a huge introvert. I don’t like going out too much. I like to be in my own space and enjoy spending time with myself. I am a little bit of a recluse maybe,” says Sharma, who recently tied the knot with cricketer Virat Kohli in a private ceremony in Italy.

Ranveer is aware of the reclusive side of Sharma and therefore enjoys pestering her even more. He says although they share a “volatile friendship”, he gets tremendous joy in annoying her. “But we share a great camaraderie. She’s an honest person, almost to a fault,” he says.

It was with the same honesty that Sharma started a beauty parlour at her friend’s house in Bengaluru when she was nine. They even distributed pamphlets in the locality and some women came to them, thinking it was a legitimate business. Their plans were scuttled when their parents got to know of it. “It was a disaster. It lasted just two days,” says Sharma with a hearty laugh. Thankfully, the same cannot be said of her film career. It’s turned out to be quite a success story.

Tweets by @forbes_india
Sunil Chhetri: In the big league
2017 has been a watershed year in many ways for India's economy