Your batteries are due for disruption

New kinds of batteries may not dazzle consumers like new apps or gadgets, but like tiny transistors, they are at the heart of technology advancement 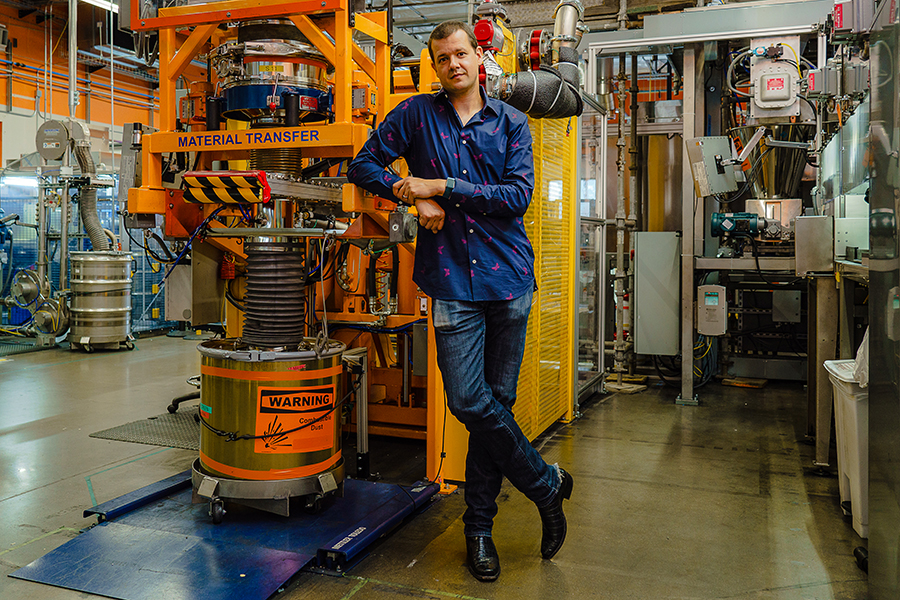 ALAMEDA, Calif. — The new Whoop fitness tracker straps around the wrist a lot like any other health monitor or smartwatch. But you can also buy a sports bra or leggings equipped with this tiny device, which can be a sliver of electronics stitched into the fabric of clothes.

Squeezing a fitness tracker into such a svelte package was no small feat, said John Capodilupo, Whoop’s chief technology officer. It required a whole new kind of battery. The battery, built by a California startup, Sila, provided the tiny fitness tracker with more power than older batteries while maintaining the same battery life.
While that may not sound earth-shattering, Sila’s battery is part of a wave of new battery technologies that could lead to novel designs in consumer electronics and help accelerate the electrification of cars and airplanes. They may even help store electricity on the power grid, lending a hand to efforts to reduce dependence on fossil fuels.
New kinds of batteries may not dazzle consumers like new apps or gadgets. But like tiny transistors, they are at the heart of technology advancement. If batteries don’t improve very much, neither do the devices they power.
Companies like Enovix, QuantumScape, Solid Power and Sila have been developing these batteries for more than a decade, and some hope to move into mass production around 2025.

Sila’s CEO and co-founder, Gene Berdichevsky, was an early Tesla employee who oversaw battery technology as the company built its first electric car. Introduced in 2008, the Tesla Roadster used a battery based on lithium-ion technology, the same battery technology that powers laptops, smartphones and other consumer devices.
The popularity of Tesla, coupled with the rapid growth of the consumer electronics market, sparked a new wave of battery companies. Berdichevsky left Tesla in 2008 to work on what eventually became Sila. Another entrepreneur, Jagdeep Singh, founded QuantumScape after buying one of the first Tesla Roadsters.
Both saw how lithium-ion batteries could change the car market. They saw an even greater opportunity if they could build a more powerful type of battery.
“Lithium-ion batteries had just gotten good enough, but they plateaued,” Berdichevsky said. “We wanted to push the technology further.”
Around the same time, Congress created ARPA-E, for Advanced Research Projects Agency-Energy, to promote research and development in new energy technologies. The agency nurtured the new battery companies with funding and other support. A decade later, those efforts are beginning to bear fruit.
After raising more than $925 million in funding, Sila employs about 250 people at its small research center and factory in Alameda, the small island city west of Oakland. When he and two other entrepreneurs founded the company in 2011, Berdichevsky thought they would need about five years to get a battery to market. It took them 10.
The Whoop 4.0 fitness tracker, which goes on sale Wednesday with a monthly subscription fee between $18 and $30, is an early indication of how Sila’s technology can work in the mass market.
The battery provides 17% greater power density than the battery used by Whoop’s previous fitness tracker. That means the device can be one-third smaller while offering a new array of body sensors and maintaining the same battery life.
Sila and Whoop, a Boston company founded by a former Harvard athlete (named after a pet phrase he used before big games), said they had the manufacturing capacity needed to install the new battery in millions of devices in the coming years.
The fitness tracker, a device with a small market niche, may seem like a baby step. But it is indicative of Sila’s hopes to push the technology into electric cars and other markets.
“If this kind of thing gets into a smartphone or some other consumer device, it is a sign of real progress,” said Venkat Viswanathan, an associate professor of mechanical engineering and materials science at Carnegie Mellon University who specializes in battery technologies.
“That is not easy.”
Sila is not exactly a battery company. It sells a new material, a silicon powder that can significantly boost the efficiency of batteries, and plans to build them using many of the same factories and other infrastructure that produce lithium-ion batteries.
Today’s batteries are based on the back-and-forth movement of lithium atoms. This generates power because each atom is in a positively charged state, meaning it is missing a single electron. In that state, these lithium atoms are said to be ionized. That is why they are called lithium-ion batteries.
When you plug an electric car into a charging station, lithium-ion atoms gather on one side of the battery, called the anode. When you turn the car on and drive down the road, the battery provides electrical power as the atoms move into its other side, the cathode. This is possible thanks to the chemical makeup of the anode, the cathode and the surrounding parts of the battery.
Typically, the anode is made of graphite. To improve the efficiency of the battery, Sila replaces graphite with silicon, which can pack more lithium atoms into a smaller space. That means more efficient batteries.
Today, the company produces this silicon powder at its small facility in Alameda. Then it sells the powder to a battery manufacturer — Sila would not identify the other company — which slots the material into its existing process, producing the new battery for the Whoop fitness tracker.
“We are just upgrading the factories that are being used today,” Berdichevsky said.
While he said this approach gave Sila a significant advantage over its many competitors. Viswanathan, the Carnegie Mellon professor, said other companies were taking different routes to refining the way lithium-ion batteries are built.
Companies like Sila and QuantumScape have partnerships with carmakers and expect that their batteries will reach automobiles around the middle of the decade. They hope their technologies significantly reduce the cost of electric cars and extend their driving range.
“If we want to get electric cars into the mainstream, we have to get them down to the $30,000 price point,” said Singh, the QuantumScape CEO. “You can’t do that with today’s batteries.”
They also hope their batteries lead to new devices and vehicles. Smaller, more efficient batteries could spur the development of “smart glasses” — eyeglasses embedded with tiny computers — by allowing designers to pack a more nimble set of technologies into smaller and lighter frames. The same battery technology could invigorate so-called flying cars, a new type of electric aircraft that could ease commutes across major cities later in the decade.
But those are just two possibilities as “all aspects of life will become more electrified,” Viswanathan said.

Tweets by @forbesindia
What comes after the war on terrorism? War on China?
Makeup for men is slowly becoming mainstream