Streaming service Disney+ Hotstar has been growing fast, and now the media house traditionally known for producing soap operas is adding to its repertoire to provide original content besides addressing sports and regional audiences 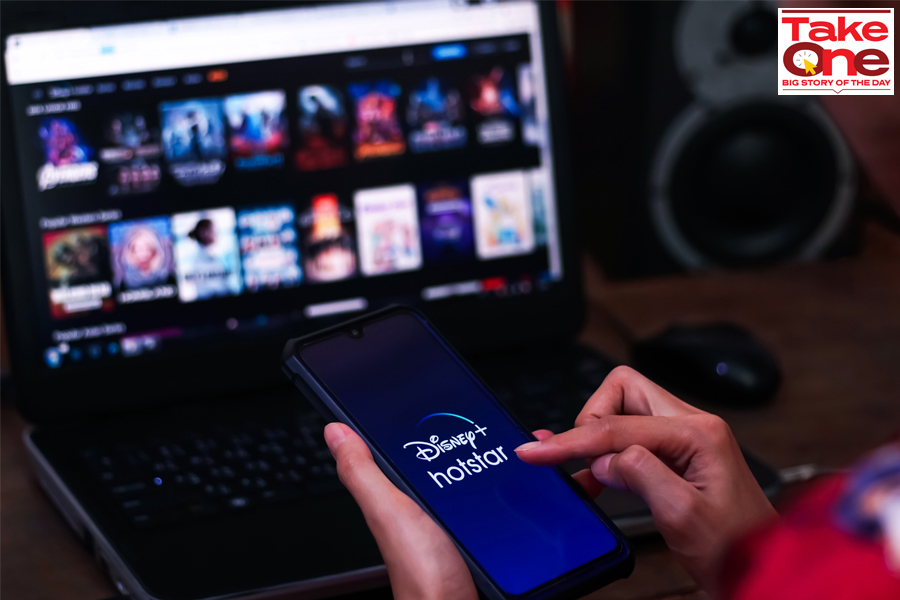 On Tuesday, Disney+ Hotstar, the video streaming service from Star and Disney India, announced a new line-up of original content with about 12 new TV shows across genres and four films. The OTT platform, formerly Hotstar, which was owned by Star India, only started producing original content two years ago—a lot later than its international competitors in India—Netflix and Amazon Prime Video."As we continue growing, it's very critical for us to stand out and come up with compelling and disruptive storytelling products. We are trying to bring diversity by exploring new genres like historical drama with Empire, supernatural thrillers with Fear and medical drama with Human," says Sunil Rayan, head and president, Disney+ Hotstar. They also hope to ride on the success of already existing OTT shows with new seasons, like Aarya, Special Ops, Criminal Justice and City of Dreams.According to Statista, internet penetration in India is at about 45 percent—still low, but growing fast. And a traditional media house like Star India, so far better known for producing soap operas, is betting big on this. "All the shows that we are developing for Star channels are first on Disney+Hotstar," says Gaurav Banerjee, President, Hindi Entertainment, Star India. Evidently, OTT seems to be the future. 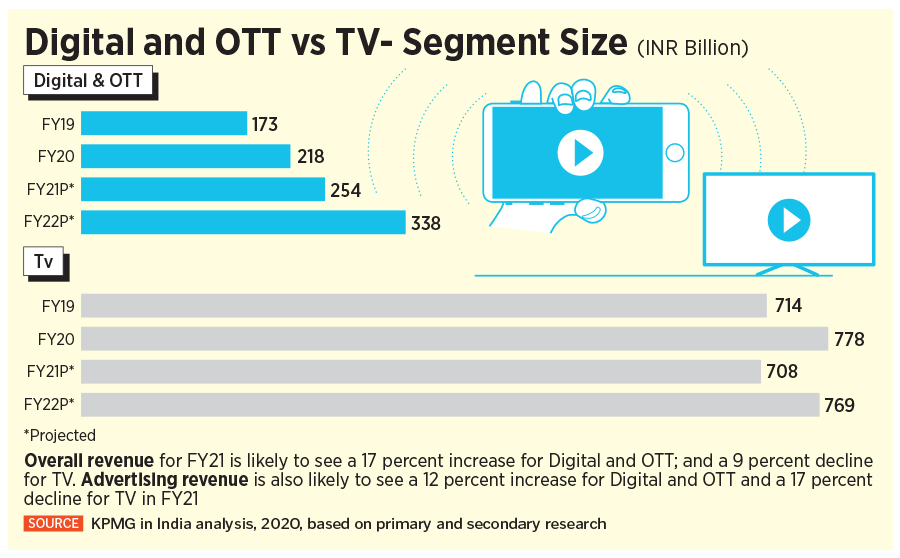 Though industry experts believe that currently broadcasting brings in a majority of the revenue and in the near term this may continue, things are likely to change going forward. “We see both GECs (General Entertainment Category) on traditional TV and OTTs co-existing in the near to medium term. This is due to the fact that the penetration of television is still ~70 percent in India, also exemplified by the 30+ million users of DD Free dish,” says Girish Menon, partner and head—media and entertainment, KPMG in India.  However, he adds, “India had 475 million+ OTT video viewers as of FY21 and are estimated to reach 600 million+ by FY23.” According to KPMG's Media and Entertainment report 2020, the overall revenue for FY21 is likely to see a 17 percent increase for digital and OTT and a 9 percent decline for TV. Currently, the Indian video OTT market is around $1.5 billion and is expected to reach $12.5 billion by 2030, according to a report by RBSA Advisors.Big on SportsThough in terms of original content, Disney+ Hotstar will have to play catch up, in terms of paid subscribers the platform is a clear winner. According to a report by Omdia, an independent analyst and consultancy firm, (which excludes subscriptions from bundled offers) Disney+ Hotstar had 18.69 million subscribers as of December 2020, a big jump from 5.36 million in 2019. On the other hand, Amazon Prime Video had 5.83 million subscribers and Netflix had 3.08 million subscribers in 2020.

The reason behind this huge subscriber base: Live sports and varied international and regional content. "Streaming the Indian Premier League (IPL) and now T20 World Cup has helped them immensely. Additionally, they have content from Disney+ and other international production houses like HBO, ABC Studios, Fox and Showtime,” explains Pavel Naiya, senior analyst, Counterpoint Technology Market Research.Within the live sports space, Disney+ Hotstar has a range of sports, including cricket, badminton, tennis, football, F1 and kabbadi. However, with SonyLiv showcasing some of the more prominent international events, including Euro 2020, Copa América and more recently Tokyo 2020, is Disney+ Hotstar losing its steam? Rayan thinks not, “We are very focussed on the mass Indian audience. I don't think we want to be singing and dancing to everybody, instead on things that really get people’s attention.” As per the Omdia report, SonyLiv had a subscriber base of 2.7 million as of 2020.

Naiya reckons, “It is a close competition in terms of the sporting events they are offering. However, if you look at the user experience Disney+ Hotstar is definitely ahead. There are no issues of lagging due to poor bandwidth and they have also optimised user experience for smartphone watching, since 95 percent of their audience is mobile first." According to him, this new lineup of originals will help them cover up for the international sporting events that they lost out to SonyLiv. “With all this [sports portfolio] and our entertainment portfolio, we don't [need to] worry about the competition,” says Rayan.Upping the Regional QuotientOne of their biggest growth pillars, as with most OTT platforms, is regional language content. “India has multiple Indias, but the lines between different languages are getting blurred. Not only will all the shows and movies being released be dubbed in seven regional languages, but we’re also going deeper to create more regional digital native shows," says Rayan.

In May 2021 the platform released its first regional language series November Story, a Tamil show—dubbed in Hindi—which saw half its viewership come for the Hindi version of the show. “Going forward, we don’t want to be constrained by one region. We want to continue focussing on making content that is cross-region, like November Story, which did well both in Hindi and Tamil,” says Banerjee. They have released a number of original movies across seven regional languages. Disney+Hotstar also airs the regional content produced by Star’s regional channels including that of Star Jalsha (Bengali), Star Vijay (Tamil), Star Maa (Telugu) and Star Pravah (Marathi). Six months ago, they announced that they would be getting a lineup of four Tamil shows and there are some Telugu shows under production too.“We are bullish about digital streaming continuing to grow,” says Rayan adding, “Though both regional markets and Hindi-speaking markets are equally attractive for us, we are bullish about the pan-India Hindi content continuing to scale.”An ‘All-Access’ ApproachIn an attempt to increase overall subscribers, besides providing more content, starting September 2021 Disney+ Hotstar has announced that it will be changing its subscription plans. The revised plan will be based on the kind of device and number of screens that will have access—mobile-only and single screen for Rs 499; two devices for Rs 899 and four devices for Rs 1,499. "Our long-term view is that for all the content that we are making, we are agnostic to screens."The focus, according to Banerjee is on content and then letting the end consumer choose when and how they wish to watch it. "Earlier, the issue probably was that only a few people—based on their subscription plans, either VIP or premium—had access to some content. To avoid this kind of friction, they have revised the strategy,” says Naiya.Disney+ Hotstar's total revenue saw a 45 percent increase in revenue from Rs 1,123 crore in FY19 to Rs 1,628 crore in FY20. It has grown both its business models—free via advertising revenue and the premium model via subscribers. Advertising revenue saw a 56 percent increase and subscription saw a 32.6 percent increase in revenue.

In terms of audience though the assumption would be that the older generation prefers watching on television and the younger generation on smartphones, Banerjee states otherwise. “This is no longer the case. It has nothing to do with age, but everything to do with where consumers see value, and where they see convenience.”Rayan says, “We are happy with the way we have grown, but the smartphone market in India is 600 million+ devices. So we have a long way to go to get 600 million people to watch on our platform.”

Tweets by @forbesindia
Without spectators, the Tokyo Games cuts its carbon footprint by 12.5 percent
Only talent is not enough, you need a support system to succeed: Anju Bobby George