The network hopes the upcoming cricket series, despite Indian captain Virat Kohli's absence in the second half, will bring in 20-25 percent higher viewership than the 2018/19 one 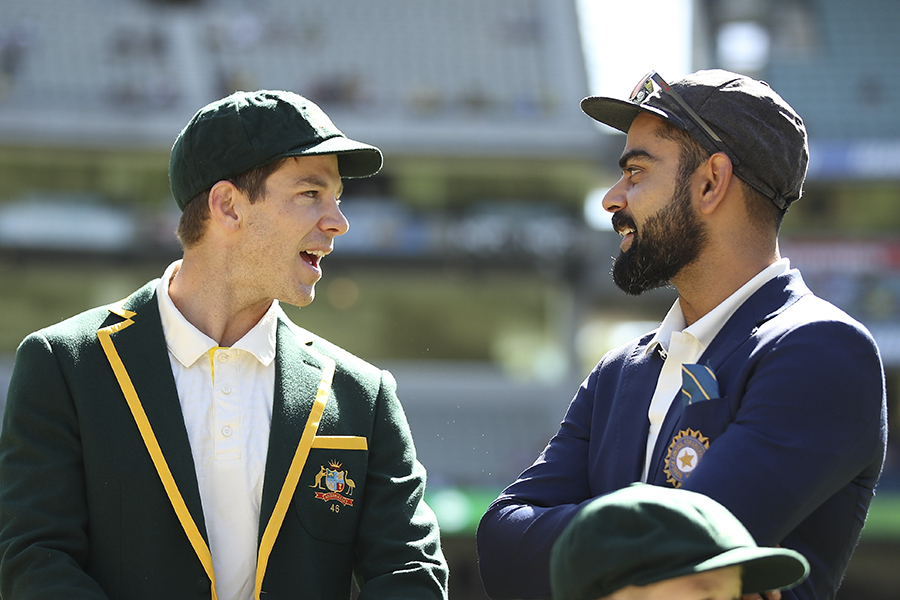 Tim Paine of Australia and Virat Kohli of India talk before the coin toss as Archie Shiller from the Make A Wish foundation who will be co-captain on Boxing Day looks on during day one of the Third Test match in the series between Australia and India at Melbourne Cricket Ground on December 26, 2018 in Melbourne, Australia.
Image: Scott Barbour - CA/Cricket Australia via Getty Images/Getty Images

As India commences its first international outing in the new normal, in a series against Australia beginning November 27, broadcasters Sony Pictures Sports Network (SPSN) is confident that viewer and advertiser interest will match up to the high-octane billing of the action on the field. Even the absence of Virat Kohli, on paternity leave during the last three of the four Test matches to be played in the second half of the tour, will not dampen the spirits, says Rajesh Kaul, the chief revenue officer, distribution, and head for sports for Sony Pictures Networks India. The network has gone on a marketing overdrive and has already sold 75-80 percent of its ad inventory. “We know how big the series is and we are going all out as a network to make it that big,” Kaul tells Forbes India in an interview. Edited excerpts:  Q. How has the pandemic impacted ad revenues? What are your expectations for FY21? Revenues for sports channels depend on the specific content you have, unlike other channels where the content is fairly similar. Some years, you’ll have three or four big events compared to others. Some of our events this year, like the Euro and the Olympics, have been postponed due to Covid-19, so that will have an impact, and we’ll get bigger numbers for these next year. But apart from that, our overall numbers are far, far better than what we had forecast in April and May. Q. What has pushed up these numbers? While we didn’t have any live action for a few months, the international tours started after that—the West Indies, Pakistan and Australia tours of England. During those events, we saw some unprecedented viewership numbers. The series against West Indies and Pakistan are among the highest-rated Test series not featuring India—they have shown close to 200 percent growth compared to the average viewership of non-India Test matches before the lockdown.  With rising viewership, advertiser interest has jumped too. We’ve earned more than three times the money that we usually do in these kinds of series. That has been a huge boost for us.  Q. And we have the India-Australia series coming up… This is now the biggest series in world sports, with a series of firsts under the current circumstances—India is playing after nine months, that too against Australia in Australia, we’ll have India’s first day-night Test abroad, in Adelaide from December 17, and there will be spectators in the stadium. Considering the series in 2018/19, which was also telecast by us, was such a big hit, we expect this series to surpass that. Last time, [the viewership] was almost 150 million; this time we expect it to be 20 to 25 percent higher. We have received excellent responses from the advertisers. We have already sold 75-80 percent of our ad inventory and have over 12 advertisers on board.  Q. Will Virat Kohli’s decision to pull out of the last three Tests have an adverse impact on advertiser interest? Not at all. Luckily, India today is not dependent on one player. Undoubtedly, Kohli is big, one of the best in the world. And he’s there for the first seven games out of 10. But in the last three Tests, you have so many top-quality players in the team.  In the IPL, the Orange Cap went to KL Rahul, and [Jasprit] Bumrah is there. Today, there are too many superstars in the Indian team and I think neither the players nor the fans will have the absence of Kohli at the back of their minds when the last three Tests are being played.      The series has generated so much buzz that we are also going out in terms of our marketing campaign—we’re using our network strength, using regional, print, digital, radio. Even though we have the global coverage coming from Australia with the likes of Alan Border and Mark Waugh joining us from there, we’ll also have our own studio set-up with experts and commentators (in Hindi, Tamil, Telugu and English) comprising legends including Glenn McGrath, Sanjay Manjrekar, Harsha Bhogle and Zaheer Khan, among others. That apart, we will have our flagship of pre- and post-match studio shows and are building up to the series by broadcasting archival India-Australia matches. Q. Have you noticed changes in sports consumption patterns? Are viewers shifting from TV channels to OTT platforms? Not really. While our numbers in digital OTT platforms are growing, for sports in particular, we have not seen a dramatic shift to OTT. India is a large country and about 95-97 percent of households are single-TV. Even now, TV continues to be the main medium of viewing, especially for sports. Cricket, for instance, is a family viewing experience. It doesn’t mean the digital numbers are not growing, but not to the extent that they will start hurting the TV numbers. We get about 15-17 percent of our ad revenues from digital, marginally up from around 10 percent three-four years ago. In India, it will take far longer than other countries for OTT to overtake TV.  Q. A lot of OTT players are joining the live sports telecast space now. Recently, Amazon Prime has tied up with the New Zealand cricket board for streaming New Zealand matches. With more and more players coming in, what would be Sony’s strategy to stay ahead?  First, we are very much in the digital play with SonyLiv. About players like Amazon Prime and other such, while they had participated aggressively during the last IPL bid, we haven’t seen much of them post that. They’ve only bagged a few rights here and there, including the New Zealand rights and the LaLiga rights for Facebook. But we haven’t seen them a big way. The Sri Lanka bidding rights happened a few months back and there were no bids from any of these OTT players. I don’t see them getting full-time into this as of now as they themselves are trying to figure out what works in this space. It might just be an experimental thing for them.