Tracing its roots back 2,700 years, the picturesque Kurdish town of Akre says it is better adapted to the modern-day perils of climate change than other parts of Iraq 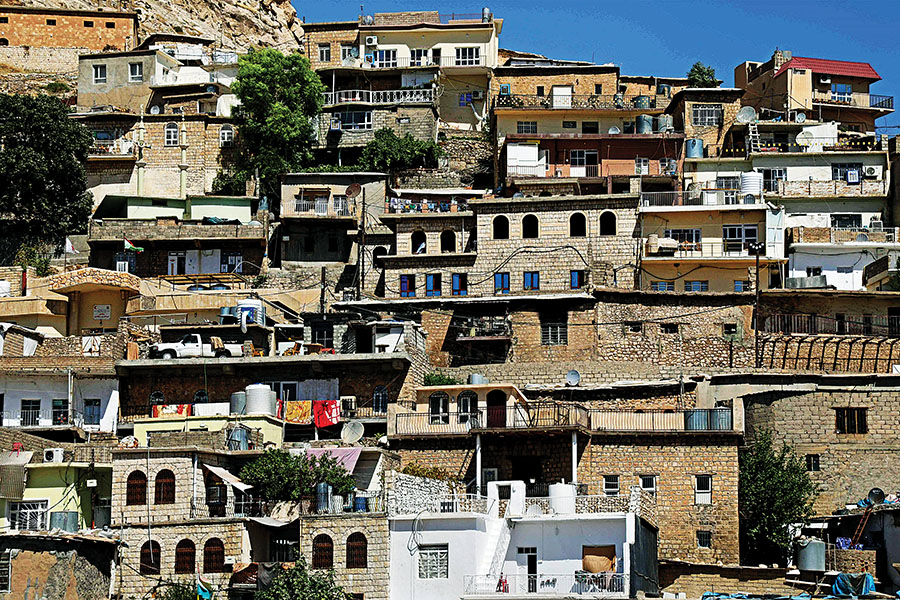 As the sun beats down on Iraq, most people swelter in their concrete homes -- but not the inhabitants of one mountain town known for its ancient and cool stone houses.

Tracing its roots back 2,700 years, the picturesque Kurdish town of Akre says it is better adapted to the modern-day perils of climate change than other parts of Iraq.

"Cement radiates heat, raises temperatures and affects the environment," said Zubair of the building material that is allowed only in outlying neighbourhoods.

Many of Akre's narrow alleyways can only be navigated by donkeys and wind through a historic city centre bathed in the pale yellow and brown hues of the locally quarried stone.

Oil-rich Iraq is the world's fifth-most vulnerable country to the effects of climate change, according to the United Nations.

The Kurdistan region where Akre lies suffers from heat and water scarcity like the rest of the country.

But while Iraqi authorities have done little to address the challenges, Akre, a city of 100,000 residents about 500 kilometres (311 miles) north of Baghdad, believes sticking with the old ways will help it adapt.

Since 1991, when Kurdistan gained de facto autonomy from Iraq, it has declared concrete off limits for construction and renovation in the old city of Akre.

An impressive building welcomes those entering the old city. Dating to 1853, it is a remnant of the Ottoman Empire that once ruled the area.

"It's an old military barracks," said Jamil Siddik, a 63-year-old engineer who oversees renovation works in the city.

The limestone used for renovation is sourced from the mountains that surround Akre, he explained. For its residents, "limestone is easy to use. It's cheap and available," Siddik said.

It also provides great insulation. "Concrete blocks may only be 20 centimetres (7.9 inches) wide, while the stones are 40 or 60 centimetres wide," he said.

Bewar Majeed, 37, lives in the old city. By his doorstep, kittens were playing in the sun, as the temperature reached 40 degrees Celsius (104 degrees Fahrenheit).

But inside the house, the rooms are nice and cool thanks to its limestone walls.

"I don't need an air conditioner," he said. "I have a small air cooler, which is enough for me, and it's less expensive."

For years after 2011, public funds paid for the renovation of 25 old houses and a mosque. In 2014, however, funding was suspended "because of the financial crisis", said Mayor Zubair.

Now, he added, old city residents may renovate or build with their own money, so long as they avoid concrete, or "eventually cover it with stone".

On top of the environmental benefits, Akre's conservation efforts aim to preserve its heritage value and attract tourism.

According to the regional tourism board, 1.7 million visitors came to Iraqi Kurdistan during the first quarter of 2022, the vast majority of them Iraqis.

The autonomous region has cultivated an image of stability, distancing itself from the violence that has engulfed other parts of Iraq in recent years.

Still, Kurdistan hasn't been entirely spared the sounds of battle.

Neighbouring Turkey regularly carries out military operations there in its fight against the rebel Kurdistan Workers' Party (PKK), which has been designated a "terrorist" group by Turkey and its Western allies.

In July, artillery bombardment several dozen kilometres away from Akre killed nine civilians, most of them Iraqi holidaymakers. Baghdad blamed Ankara, which denies the Iraqi claim.

But Akre's residents shy away from politics.

Ali, an ice cream vendor, said tourists who are drawn to the town bring him "joy".

"We get Iraqis, Germans and French," he added. "They like our historic city centre."