From Saddam to ISIS: Iraq is still exhuming mass graves

The site near the central shrine city of Najaf is one of many in a country that suffered over four decades of bloody conflict and turmoil. Dictator Saddam Hussein went to war with Iran from 1980 to 1988; next came the 1991 Gulf war over Kuwait; then the 2003 US-led invasion, and most recently the Islamic State group's reign of terror until 2017 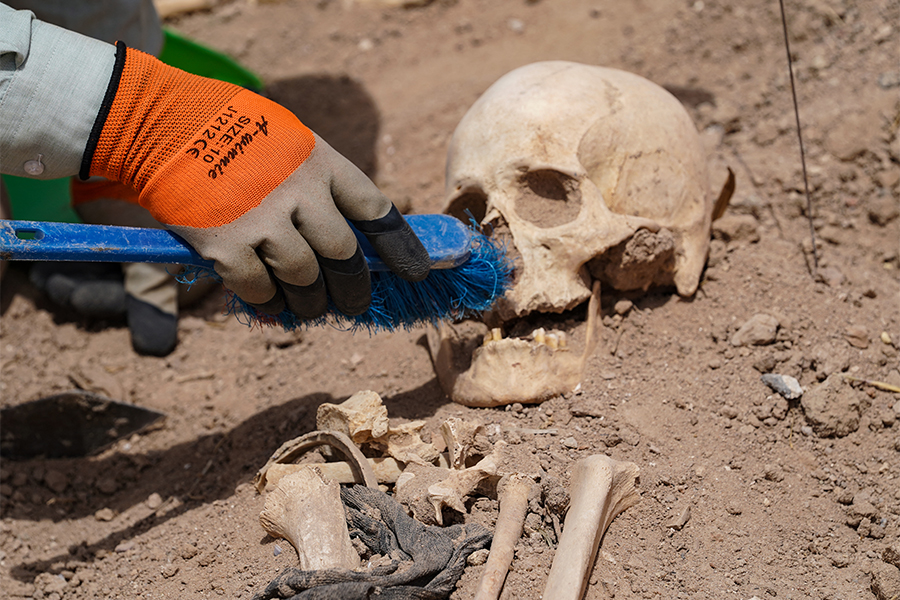 A forensics expert uses a brush to exhume a skull at the site of a mass grave, discovered by chance when property developers wanted to prepare the land for construction, in the central city of Najaf, on May 18, 2022. Photo: Qassem al-KAABI / AFP

Najaf, Iraq: A noisy backhoe digs up earth to uncover yet another mass grave in Iraq, human remains are exhumed and the forensics experts get to work on their grim task. A skull is freed from a layer of clay, a tibia is placed in a body bag -- all bound for a laboratory to be genetically checked against blood samples from relatives of the disappeared.

The site near the central shrine city of Najaf is one of many in a country that suffered through more than four decades of bloody conflict and turmoil.

Dictator Saddam Hussein went to war with Iran from 1980 to 1988. Next came the 1991 Gulf war over Kuwait, then the 2003 US-led invasion, years of sectarian bloodletting and most recently the Islamic State group's reign of terror until 2017.

The years of violence have made Iraq one of the countries with the highest number of missing persons in the world, says the International Committee of the Red Cross.

The mass grave was discovered by chance when property developers wanted to prepare the land for construction.

'We waited, he never came'

Intissar Mohammed was summoned to provide a drop of her blood as a sample because the authorities suspect her brother's remains could be found in the mass grave.

At the time, Intissar and the rest of the family had moved to neighbouring Syria but Hamid had stayed in Iraq for his studies, planning to join his family later. Also read: On Syria's ruins, a drug empire flourishes

"We waited for him, but he never came," recalled a tearful Intissar. The young man was reportedly kidnapped, she said, "and we never heard from him again".

Intissar, who returned to Iraq in 2011, remains hopeful that she will find out more.

Her DNA will be "compared with the bones found in situ", said Wissam Radi, a technician at the forensic medicine department in Najaf.

The identification process takes time and wears down the patience of relatives, who often complain that they feel abandoned.

Opening a mass grave is a mammoth task and "the biggest obstacles are financial", said Dergham Kamel of the Martyrs' Foundation, a state body in charge of managing mass graves.

He said another government institution, the Directorate for the Protection of Mass Graves, had received "no funding from the government" between 2016 and 2021.

The centralisation of the Iraqi system is another hurdle as genetic comparisons are conducted exclusively in the capital Baghdad.

In the former IS bastion Mosul and elsewhere in northern Iraq, forensic scientists are making slow progress in analysing the 200 or so mass graves left behind by the jihadists.

'May God have mercy'

Hassan al-Anazi, director of forensic medicine in the north's Nineveh province, has asked for the missing person database to include all the region's IS victims, but so far to no avail.

"There are thousands of missing people," he said. "Every day, about 30 families come to us to ask for news of their loved ones."

However, he said, "due to a lack of political will" the Khasfa mass grave in Mosul, one of the largest, has still not been opened.

It contains the remains of officers, doctors and academics killed by the IS, with a total of around 4,000 victims.

Bereaved Mosul mother Umm Ahmed is seeking information about the fate of her sons, police officers Ahmed and Faris, who were abducted by the IS when it took over the city.

"I knocked on every door," she said. "I even went to Baghdad. But I got no answer."

The lack of information also raises a financial issue. Until the remains of a missing person have been identified, relatives receive no compensation from the Iraqi state.

In many cases, the fathers, sons and brothers killed by the IS were breadwinners.

To help the families, Dalia al-Mamari has created The Human Line association in Mosul, which advises on the compensation process.

"The government is very slow," she said. "Often all they tell us is: 'Your children are dead, may God have mercy on them'."by Qassem Al-Kaabi with Laure Al-Khoury in Mosul