Spore the merrier: Mushrooms grown on Belgian beer are in great demand

The high-end fungi grown by a Brussels firm, Eclo, in a disused abattoir are finding their way to gourmet customers—while boosting the circular economy 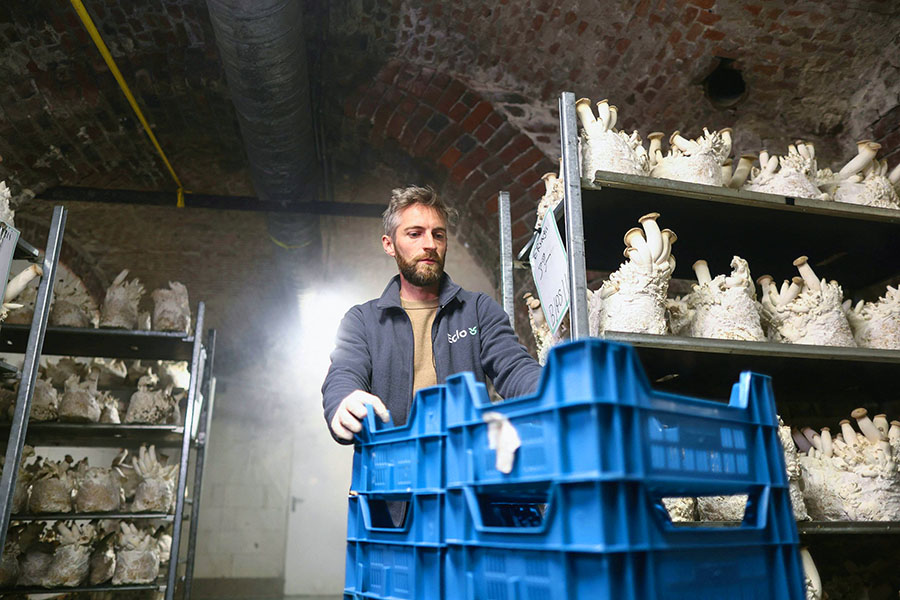 In Belgium, a country reputed for its beer, mushrooms nourished on a byproduct from the brew are doing booming business.

The high-end fungi grown by a Brussels firm, Eclo, in a disused abattoir are finding their way to gourmet customers—while boosting the circular economy.

And the substrate—the substance the spores grow out of—is easy to come by in Belgium: a mix of spent grain left over from the mashing process to make beer, and discarded baguettes and dried bread.

"The beer and the bread don't have any effect on the mushrooms' taste, but we get better yields from them in terms of quantity and quality," explained Quentin Declerck, one of Eclo's founders.

His company has for several years been collecting the brewers' grain from Belgian beer-maker Cantillon and leftover bread from Colruyt supermarkets and the Bon Pain chain of bakery-and-sandwich shops.

That castoff material then goes into Eclo's cold rooms, where the mushrooms grow in the moist air.

Each week, the company sells between eight and 10 tonnes of its mushrooms.

Beyond the blooming financial advantage the activity brings, Declerck explained that contributing to a domestically made and ecologically friendly production in Brussels was a motivation.

"We realised that many of the mushrooms bought in shops came from the Netherlands, many from eastern (European) countries, and even further afield, from China," he said.

"Today there is a certain production that has been relocalised (to Belgium). We are part of that movement."

Eclo was created in 2014 after its founders read a book about the circular economy, in which discarded items are repurposed and reintroduced into the market rather than thrown away.

The book spoke of growing mushrooms from coffee grounds—a process already being used by another Brussels company.

Eclo tried that route initially, but "it was a resounding failure" for the varieties it wanted to grow, Declerck said.

Also read: Mushrooms on track to become the superfood of 2022

"Shiitake doesn't grow at all in coffee grounds."

So it switched direction for its substrate, and trained some 30 people on how to grow mushrooms from brewers' grain and bread.

The experience has had its ups and downs.

"Some of them just gave up. This is still a form of farming and it's tough—you work in very moist rooms, sometimes you don't see the sun all day," Declerck said.

Trying to compete against industrial-scaled rivals also dealt a blow to the morale of some.

"You need to cope with market prices otherwise you simply don't sell. We've found our niche, so we're able to pay our people fairly, but a lot of projects don't pay."

Eclo is testing out other options in its production, for instance seeing if substrate using discarded ground cacao beans.

It is also seeking to grow and set up a factory that can sell substrates on the European market.

In Belgium, the number of companies involved in the circular economy grew by a third between 2019 and 2021, according to a study by the Inoopa start-up in 2022.

But there is still a long path ahead: a study for Belgium's Wallonia region in June found that 60 percent of the companies on its territory didn't at all know about the concept of the circular economy.