What it takes to trek uphill in Kashmir to bring back morels, one of its most premium culinary ingredients 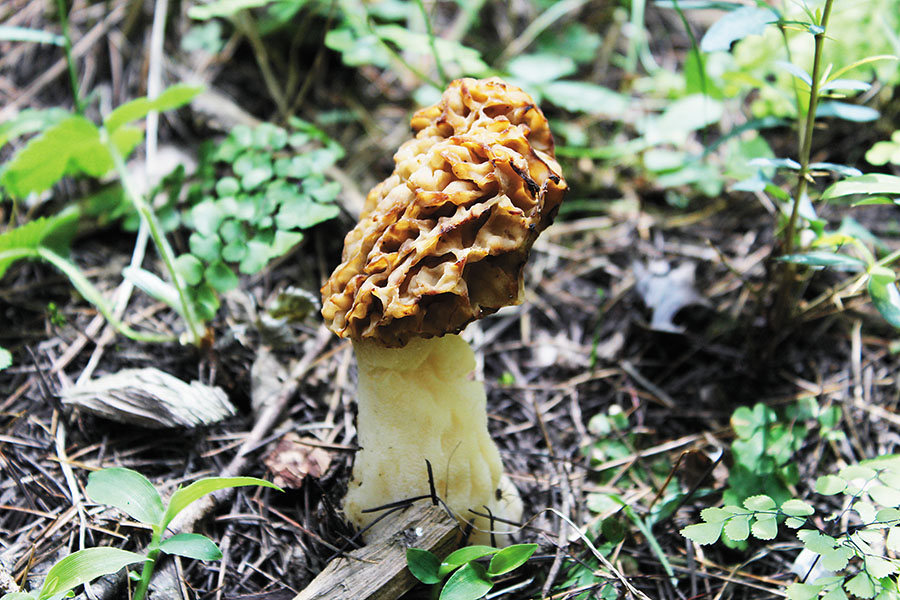 A kilogram of morel mushrooms costs between ₹20,000 and ₹40,000, depending on its quality and harvest
Photographs: Sajad

The popularity of morel mushrooms can be attributed to the legend of a queen who visited Kashmir and fell in love with them. While I can’t vouch for the story, there’s no denying the touch of royalty it has lent to these wild mushrooms, not only in its exquisite-yet-reclusive nature, but also in its value. Today, every kilogram of morel would cost between ₹20,000 and ₹40,000, depending on its quality and harvest. For, you may scour the upper reaches of Kashmir for an entire day only to return with three lone morels.

Morels need a certain altitude—higher than Srinagar’s 1,500-odd feet elevation—dense vegetation, and a certain level of moisture to grow. Given its climactic preferences, in India, it is only found in Kashmir, parts of Himachal Pradesh and Uttarakhand. But much of the morels grown in the region are exported. Many scientists have tried to replicate the exact conditions, and cultivate morels in a controlled environment; all those have come a cropper. Which means morels can’t be grown anywhere but in the wild, and finding them could be as arduous a task as sniffing truffles from under the ground with pigs or dogs guiding you.

For a Kashmiri, and I am one, morels are a celebrated ingredient of the local cuisine. They are a delicacy, just like game meat would be to many Africans. It is prized as a gift, and a wedding is considered to be really lavish if morels are served on the menu. It holds a status far higher than what is accorded to meat. Anyone can have meat, but not everyone can have morels. At home, too, mum would cook morels and red rice only on occasions, either a birthday or an equally worthwhile celebration.

With its uber-earthy flavour and distinct aroma, different from all other varieties of mushrooms, morels add a nuance to dishes. In Kashmir, we would extract water out of morels and use it as a base to cook rice. The rice would taste like earth with a whole lot of umami incorporated in it. Kashmir has a lot of rice dishes with morels, like morel pulao, and it can also be paired with yoghurt.

Foraging is my bread and butter. I’ve trained briefly at Noma in Copenhagen, with chef Rene Redzepi who transformed Nordic cuisine with his foraging practices. And I have embraced this philosophy at Masque, my two-year-old restaurant in Mumbai’s Lower Parel where I gather seasonal ingredients to put together a tasting menu. I go back to the hills almost every two months to introduce new elements to the menu; that’s how seabuckthorn from Ladakh and hisalu berries from Uttarakhand made appearances at Masque. 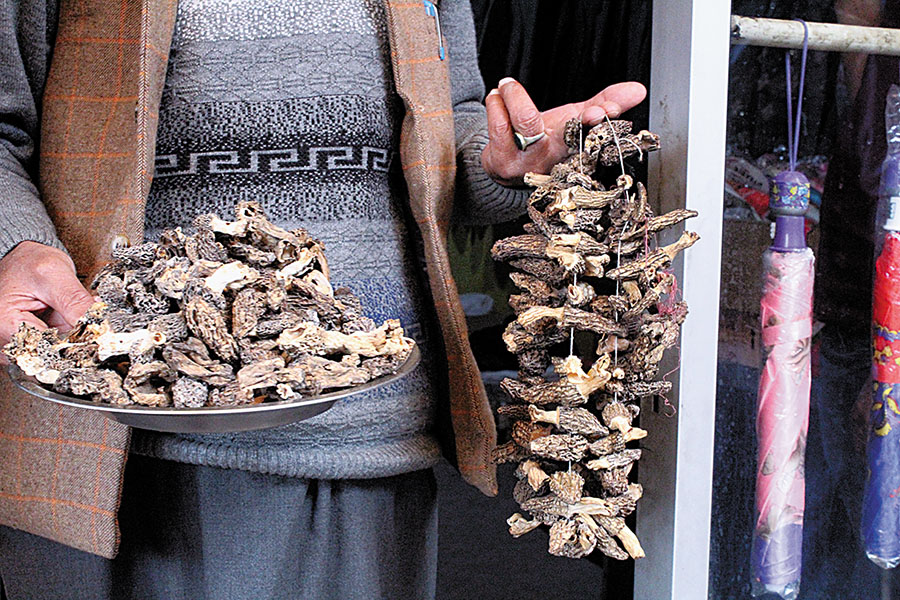 In Kashmir, people extract water out of morels and use it as a base to cook rice. But not everyone can afford to have morels

This year, in April, I decided to trek to the Kashmiri hills in search of morels. While I travel to Kashmir often, the reason I chose morels this time is not just to give urban Mumbaikars a taste of wild mushrooms, but also educate diners about them. You could probably count the number of Indian restaurants using morels on one hand. The common notion is that morels are the Indian variation of truffle and the comparison usually follows their similarity in skyrocketing prices. But while both are types of fungi, they are not the same. I wanted to capture the essence of morels, how they are grown, and tell the diners the story of one of Kashmir’s key culinary ingredients.

We zeroed in on three belts in three different forests with three different terrains: Shopian, an area known for its apples, where I would spend one day, two more days in Kupwara and the final day in Dachigam, a wildlife sanctuary in the state. April and early-May are the prime times for morels. Our guide and Jammu & Kashmir government horticulturist Tassaduq Mueen told us that the first morels are known to hatch after a thunderstorm. Research shows that the electricity from lightning bolts might significantly increase the yield of certain mushrooms.

Perhaps we ought to have known our fate on Day 1 in Shopian even before we started, because it was a dry day. We started around 8.30 am, after breakfast and noon chai (salt tea), and set off on one of the forest trails. Trekking at high altitudes is difficult, particularly for cityfolks like me, because oxygen content thins down and wears you out easily. It pinches even harder when you walk around for over an hour without a single morel in sight. Even as breathing started to get difficult, only one question continued to hammer in my head, “Where is the mushroom?” Sights firmly on the ground, we often went down on our haunches, but over 80 percent of those turned out to be false alarms (you need an expert to guide you on your first trip). There were many varieties of mushrooms, both edible and non-edible ones. But none was what we were looking for.

Then we spotted one. Under an oak tree. Wrapped in green vegetation, you could see the black, honeycombed head and a beige stem. We had lost track of time and it was almost afternoon when we found a morel. We’d finally earned our lunch.

You see, mushrooms never grow in the same place year after year. The spores underneath the ground travel around, even if within a limited area. For morels, it’s 50 metres. If a morel grows right under your feet today, next year it’ll be somewhere else within a 50-metre diameter. And the dull colour camouflage (usually brown or black heads) ensure they often go unnoticed. Even for locals who’ve made an industry out of hunting morels, it’s a tough ask. We learnt it the hard way when we finished Day 1 around 4 pm with just six. 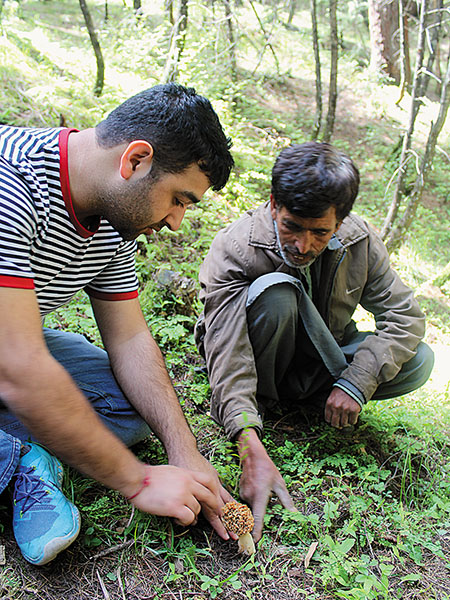 Chef Prateek Sadhu went trekking in Kashmir, looking for morels and found one after a lot of effort
Our expectations weren’t high when we reached Kupwara. But while beginner’s luck had evaded us, it seems second time’s a charm: It had rained the night before. This time, soon after we started, we spotted a morel under a pine tree. And then, about 200 grams within 200 metres. One batch had 10 next to each other. Then again, not a single one in sight for a kilometre before we stumbled upon another batch. At the end of our two-day jaunt in Kupwara, we returned home with half a kilogram of morels, numbering 25 to 30.

Somewhere we would see small holes in the ground with the stems sprouting from it, suggesting locals must have reached the spot before us and plucked the mushrooms. No start is early enough while collecting morels.

While most of the morels in Shopian would come in single units, they came in batches in Kupwara and Dachigam. The ones we hunted in Kupwara were the best of the lot: Huge, and with the texture of soft-cooked meat, while the Dachigam mushrooms were small and bite-sized. We collected about 200 grams in a day.

I laid our bounty out under the fan all night to draw out the moisture. Then, I wrapped them in hand towels and brought them back. A fresh morel has a shelf-life of five to seven days, so we used them at the restaurant for about a week before dehydrating them and using them to stuff a lamb course. We also did a second dish on variations of morel: A morel sauce at the bottom, walnut ricotta, fresh morel, and a morel foam on top. We could pair it with anything acidic, or even lamb or chicken. But we let it go alone. Why shouldn’t we celebrate such a product on its own and give it the respect it deserves?

(As told to Kathakali Chanda)