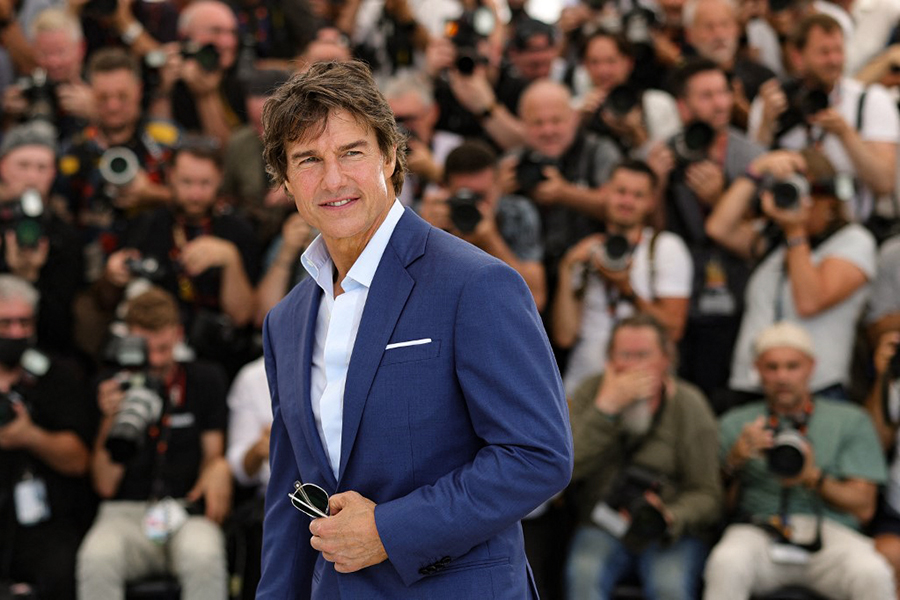 Tom Cruise poses during a photocall for the film "Top Gun: Maverick" at the 75th edition of the Cannes Film Festival in Cannes, southern France, on May 18, 2022. Image: Valery HACHE / AFP

Tom Cruise made it clear there was no chance "Top Gun: Maverick" would be released first on a streaming platform despite multiple pandemic delays, as he visited Cannes on Wednesday.

"I make movies for the big screen... I love this experience and I want other filmmakers to have that experience," Cruise told an audience at the Cannes Film Festival.

He was speaking ahead of the European premiere of the much-anticipated sequel to his 1986 blockbuster.

The film was supposed to have its first big screening in Cannes way back in 2020 before the festival was cancelled by the Covid pandemic, which was followed by a series of postponements to the film's release.

Asked if he had considered debuting "Top Gun: Maverick" on a streaming platform—as happened with several big productions in 2020 and 2021—Cruise was emphatic: "That was not going to happen, ever."

"Look at us all together, we're all united, we all speak different languages, different cultures... but we're able to come together around a shared experience," he said of his love for movie theatres.

"Cinema is my love, my passion. I always go to movies when they come out. I'll put my cap on and sit in the audience with everyone. I've spent a lot of time with theatre owners."

Cruise has become an ambassador for cinemas—even sneaking into a screening of Christopher Nolan's "Tenet" at the height of the pandemic in the summer of 2020 in a bid to boost sales.

With "Top Gun" out worldwide next week, and two "Mission: Impossible" sequels due in 2023 and 2024, Cruise hopes to play a key role in helping theatres recover from the ongoing slump triggered by the pandemic.

"I go to cinemas and there's people there who are serving the popcorn and running these theatres. I tell them: 'I know what you're going through, just know we're making 'Mission: Impossible', 'Top Gun' is coming out..."

Tweets by @forbesindia
Is Badminton still a hard sell in India?
Waste is the latest source of inspiration for perfumers