Cinemas set to open, but will the show go on?

While theatre owners look forward to re-opening after months of zero revenue, reduced capacity and high fixed costs might bring the curtains down for some small and mid-sized players 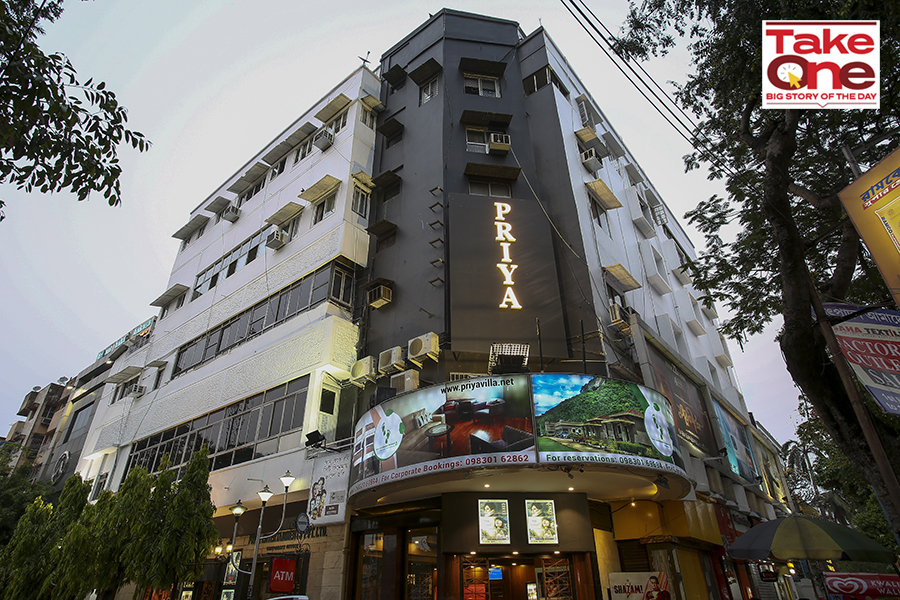 According to a KPMG report, India has 9,440 screens of which 3,150 are in a multiplex, and the rest are standalone. Post the lockdown in March, no new screens are expected to be added during FY21, and many single screens may be permanently closed
Courtesy: Priya Entertainment

After being shut for close to eight months, cinemas are set to open across the country from October 15 (barring a few states). While the government mandate has made many theatre owners upbeat after months of zero revenue, it may merely be a baby step in the long road to normality. According to audit firm KPMG, the film industry’s revenues are expected to decline significantly by 67 percent to Rs 61.1 billion in FY21 as compared to Rs 183.3 billion in FY20; revenues earned from the box office during the same period will plummet to Rs 30 billion from Rs 139 billion. Even cash-rich multiplex owners aren’t expecting a windfall as soon as the curtains go up. “Our first set of consumers would really play the role of an evangelist. They will go out and talk about their experiences at the cinema. We will use this more as a marketing phase,” says Gautam Dutta, CEO, PVR Cinemas, adding it will only be in Diwali that the theatres will get into real action. “Starting mid-November is really when we will begin the road to recovery and, by December, I am confident we will hover around the pre-Covid numbers.” In a graded reopening that is being planned, PVR has approvals to re-open 100 properties comprising 487 screens out of their total of 845. By the end of the month or November, they are looking at getting approvals for the remaining screens. Given their relatively deep pockets, players like PVR have not been forced to shut down any theatres just yet. According to a recent Crisil note, the company had liquidity (cash and bank balance, undrawn committed bank lines and other liquid investments) of over Rs 4.5 billion as on September 2020. This, reckons Crisil, “should remain adequate to meet operating and debt servicing for the next few months”.

But the agony might run deeper for many smaller and mid-size players as analysts feel people might still be diffident to venture out to theatres. “It will take multiplexes at least another 8-10 months, if not more, to come back to pre-Covid levels; a complete recovery can only happen once an effective vaccine is in place,” says Naveen Kulkarni, CIO, Axis Securities. Arijit Dutta, who runs Priya Entertainment in West Bengal, for instance, has not had it easy. The company owns three multiplexes and four single screens the state. “I had to shut down one single screen theatre,” says Dutta. “Two that have lower cost of operations are still running...if things keep getting worse, I might shut them down as well.” Dutta believes close to 10-15 percent of single screen cinemas across the country are likely to shut down. “In certain places, property owners refuse to reduce rentals. This might wipe out cash assets of theatre owners who may, then, choose to shut down.” According to a KPMG report, India has 9,440 screens of which 3,150 are in a multiplex, and the rest are standalone. Post the lockdown in March, no new screens are expected to be added during FY21, and many single screens may be permanently closed. 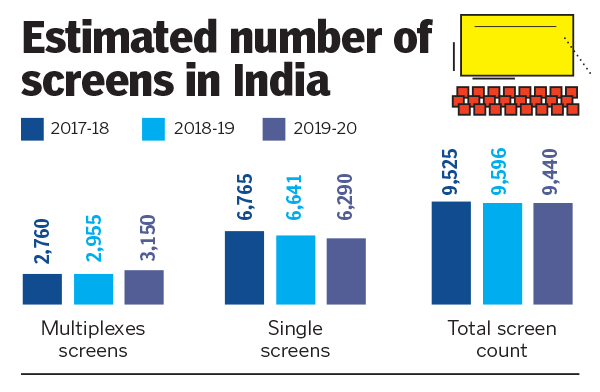 Even for the theatres that are opening, the occupancy is to be limited to 50 percent. Which means the footfalls aren’t expected to be back to pre-Covid levels anytime soon. “With the pandemic still continuing to spread in India, albeit marginally slower, the occupancy levels are not expected to normalise as soon as cinemas reopen, and meaningful audiences in urban centres may be limited,” says Girish Menon, partner and head, media and entertainment, KPMG India. Alok Tandon, CEO, INOX Leisure and director of the Multiplex Association of India (MAI), though, is banking on the months-long quarantine fatigue. “We believe that with a large part of the working population working from home, coupled with pent-up demand for giant screen entertainment, the hype will be distributed evenly across all seven days of the week,” he says. Would it be financially viable to run operations at half the capacity? Akshaye Rathi, a film exhibitor owning 17 screens across Madhya Pradesh, Maharashtra and Chattisgarh, says, “Even in pre-Covid times, the national average occupancy was about 30 percent. A 50 percent capacity is reasonably good to start with.” By the time big films drop in December, he is hopeful the capacity would improve too. The director of Aashirwad Theatres, Rathi further explains, “Had these films released pre-pandemic, in a four-screen property, it would probably have got 12 or 14 shows, but now with fewer movies ready for release, those that will hit theatres will get more shows, say 17 to 18.” So, the losses from a reduced capacity may be offset by a higher number of shows, he says. For a typical theatre, ticket sales account for 55-57 percent of the revenue, while F&B and advertising add up to 28 and 11 percent, respectively. “The one major change we are likely to see is advertising revenue, which could possibly take a little more time to move up—at least four to six weeks,” says Dutta of PVR. As per KPMG’s report on the media and the entertainment sector, in-cinema advertising, which was Rs 10.6 billion in FY20 is likely to drop down to Rs 3.7 billion in FY21. Hence, ticket sales and F&B will have to bring in a larger share, at least initially. “We exited FY20 with approximately 58 percent of our revenues from box offices and about 26 percent from F&B sales,” says Inox’s Tandon, adding that he feels the trend will continue. There are no plans to increase prices for tickets or F&B, instead most theatres—large and small—are looking to offer discounts for the first couple of weeks to attract audiences. “Though a majority of revenue is from ticket sales, F&B is a high-margin business. The net profitability from F&B contributes a significant portion to the revenue pie," adds Rathi. While many films that were ready have already released on OTT platforms, what could audiences expect at the theatres? “Of the total number of films that were released between April and October last year, only about 2.5 percent were launched on OTT platforms during the same period this year,” says PVR’s Dutta. “That adds to roughly about 35 or 36 films. In India, we get about eight or nine films releasing in a week.” For the short term, Devang Sampat, CEO, Cinépolis India & director at MAI, says, “We will be entertaining audiences with a film festival showcasing blockbuster and critically acclaimed movies. We also have many new regional movies lined up for release for Durga Puja (October 22-26th) as well as Kannada Day (November 1).” Apart from regional content, there is a pipeline for Bollywood cinema with 17 movies ready for release. This includes the much-awaited ’83 (about India’s first cricket World Cup victory) and Sooryavanshi (starring Akshay Kumar). “While blockbuster content will start coming in shortly after reopening, we do expect a ramp-up period of about 12 weeks post re-opening to get back to pre-Covid revenue levels,” adds Sampat. Irrespective of whether there is pent-up demand in the market or people feeling confident about stepping out, Rathi says, “it will take extremely compelling movies, like Sooryavanshi or ’83, to really shake the market up and draw big numbers”. Only after that will the smaller and mid-budget movies see better traction. Currently, multiplex owners have no clarity about when theatres are likely to re-open in Maharashtra. Mumbai is a key market for multiplexes to get set on the road to recovery, with Maharashtra accounting for 12-20 percent of the national box office collections, says Rathi. If Mumbai also opens up, much-awaited movies like Christopher Nolan’s Tenet are likely to release immediately. “But the key thing is to get Mumbai to open up. Once the entire circuit is completed, you could say the ball has started to roll,” says Dutta of PVR. With cases continuing to grow by the day, there is a worry about another spike in Covid-19 cases if theatres re-open. “But the standard operating procedures (SOPs) have been framed keeping in mind how this virus grows, and the protocols that are required to keep it under check,” adds Dutta. 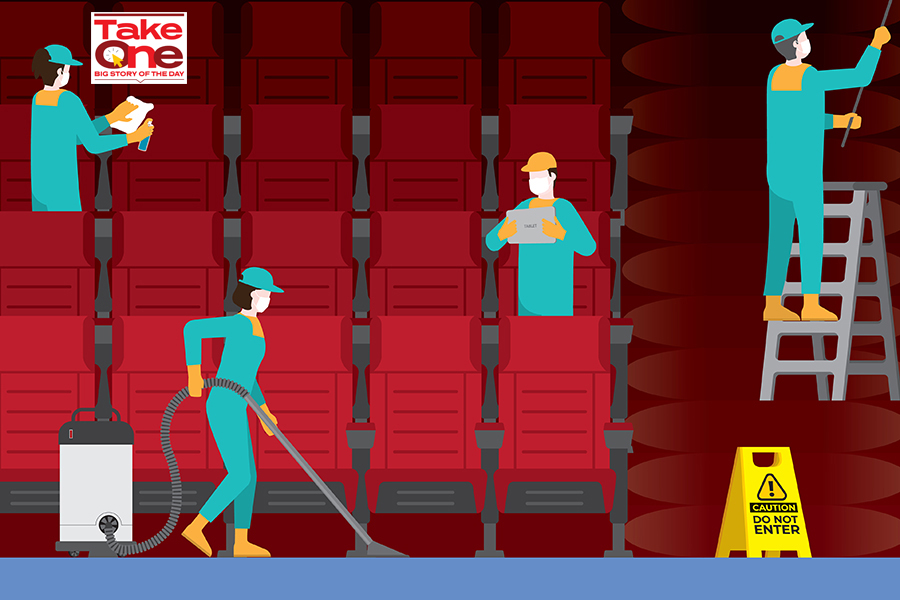 Image: Shutterstock For states like Assam, the curtains are still down and there is no clarity on when the theatres are likely to open. The owner of single-screen Anuradha Cinemas in Assam’s Guwahati and the president of the All Assam Cinema Hall Owners' Association, Chinmoy Sharma, says, “Once we get the go-ahead, and the SOPs are given, we will speak to all the owners as well as film distributors to understand what is available for release. Based on that, we can take a call if we should open immediately or wait for some time.” Unlike South India or Bengal, Sharma says they don't have as much regional content to rely on, hence it is only Bollywood or Hollywood films that can be released. With revenues being close to zero, Sharma believes that of the 78 theatres across Assam, about 8-10 are not likely to open at all. “Adding to our woes is fixed electricity charges, which we have been paying for months now,” he says. Besides, film distributors might hike hike up their fees to make up for lost revenues. “In such a scenario, is it financially viable to open up at all? Our focus when and if we do start, would not be profits but lowering our losses.”