After a slow return to cinema-going after the Covid-19 pandemic, the film business will be hoping for a boost on the French Riviera when the 75th edition of the world's leading cinema festival returns from May 17 to 28 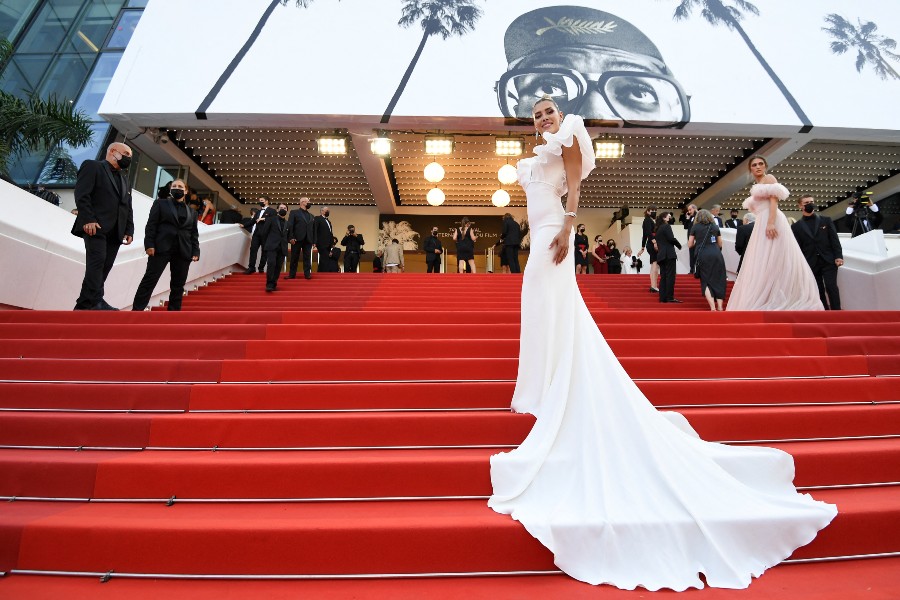 The 75th edition of the world's leading cinema festival, The Cannes Film Festival is set to return from May 17 to 28. (Credit: ​CHRISTOPHE SIMON / AFP)

Paris, France: The Cannes Film Festival will hope to relaunch the industry's hopes with another star-packed line-up to be announced on Thursday.
After a slow return to cinema-going after the Covid-19 pandemic, the film business will be hoping for a boost on the French Riviera when the 75th edition of the world's leading cinema festival returns from May 17 to 28.
Tom Cruise is already confirmed for the festival promoting the world premiere of "Top Gun: Maverick", the sequel to his 1986 blockbuster. Also attending is Tom Hanks, who co-stars in "Elvis" as the rock'n'roll star's manager, Colonel Tom Parker.
The latter is the latest spectacle from Australian director Baz Luhrmann, who has previously lit up Cannes with "Moulin Rouge!" and "Gatsby".
The rest of the line-up will be announced on Thursday, including the 20-odd films competing for the top prize Palme d'Or.

The selection committee, who have been working their way through more than 2,000 entries in recent weeks, have a tough act to follow after last year's vintage edition.
Coming after the festival was cancelled by the pandemic in 2020, it launched several films that went on to global success, especially "Drive My Car".
After picking up three awards at Cannes, it went on to win this year's Oscar for best international feature film — and was the first Japanese film to be nominated in the best picture category.

Last year's jury — led by US director Spike Lee — gave the Palme d'Or to Julia Ducournau's body-horror "Titane" — ensuring the festival maintained its reputation for boosting bold and edgy filmmaking alongside starry entertainment.
The organisers have left it late to announce who will chair the jury this year, but Penelope Cruz and Marion Cotillard are among the favourites according to industry insiders.
Film experts have also been picking through the release schedules for ideas on who might be in competition.
Many are hoping to see the return of David Cronenberg, whose upcoming sci-fi/horror cross-over stars Viggo Mortensen, Kristen Stewart and Lea Seydoux.
Also hotly tipped is Australian George Miller, the man behind "Mad Max", who takes a new direction with "Three Thousand Years of Longing" about a djinn (played by Idris Elba) offering three wishes to Tilda Swinton.
Another possibility is Terrence Malick, who won previously for "Tree of Life" starring Brad Pitt. His new film follows the life of Jesus Christ and stars Mark Rylance as Satan.
Though women have been getting more of a presence on the festival circuit, they remain poorly represented.
One possible contender in competition at Cannes might be US director Kelly Reichardt, with her new film, "Showing Up". Her lo-fi hit "First Cow" was on many critics' end-of-year lists in 2021.

As with everything in the arts at the moment, the Russian invasion of Ukraine hangs over the selection.
Possible names include exiled Russian filmmaker Kantemir Balagov, 30, whose film "Beanpole" won the directing award of the Un Certain Regard section in 2019.
Or there may be the return of Kirill Serebrennikov, who was unable to attend Cannes last year for his Palme nominee "Petrov's Flu", after being banned from travelling due to a controversial court case.
One possible Ukrainian entry is a film about the Allied destruction of German cities at the end of World War II by director Sergei Loznitsa.
Meanwhile, festival director Thierry Fremaux has been pushing for a change to the rule that bars streaming platforms from competing at Cannes.
But French cinema distributors, who have a seat on the festival board, continue to block the move even as big-name directors such as Martin Scorcese and Jane Campion have turned to Netflix and other streamers for financial support.
In the short term, that means that the much-anticipated Marilyn Monroe biopic, "Blonde", starring Ana de Armas, a Netflix film, cannot compete for Palme, although fans are still hoping it will get a premiere on the Cote d'Azur.
By Francois Becker and Eric Randolph
© Agence France-Presse