The app—which Trump launched after being barred from Twitter—had been kept out of Google's store over its lack of moderation tools, including for violent threats. Google said Truth Social has since been updated to comply with its policies barring objectionable posts, and has built in effective systems for reporting and removing unwanted content as well as blocking abusers 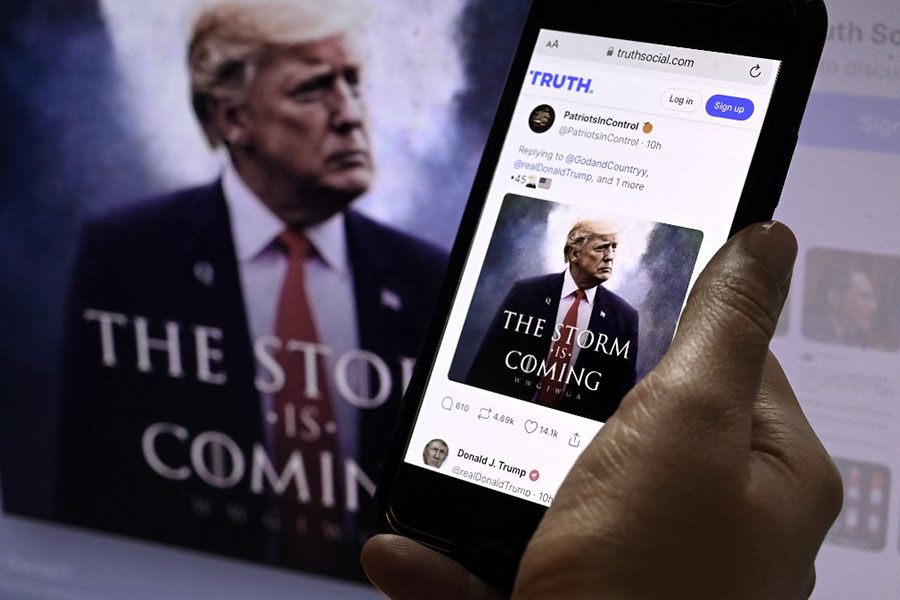 Truth Social has since been updated to comply with its policies barring objectionable posts, and has built in effective systems for reporting and removing unwanted content as well as blocking abusers. Photo by OLIVIER DOULIERY / AFP

San Francisco, United States: Google on Wednesday said it has allowed Donald Trump's Truth Social app in its Play Store for Android devices—after receiving assurances the app would meet the platform's standards for moderating harmful content.
The app—which Trump launched after being barred from Twitter over the 2021 Capitol riot—had been kept out of Google's store over its lack of moderation tools, including for violent threats.
Google said Truth Social has since been updated to comply with its policies barring objectionable posts, and has built in effective systems for reporting and removing unwanted content as well as blocking abusers.
"Apps may be distributed on Google Play provided they comply with our developer guidelines, including the requirement to effectively moderate user-generated content and remove objectionable posts such as those that incite violence," a Google spokesperson said in response to an AFP inquiry.

Developers can make Android apps available elsewhere on the internet, but the Play Store is a main source of content for users.
A Truth Social app for Android devices is available on the social network's website and other venues that may not have Google's content moderation rules, according to the Alphabet-owned tech titan.
"It's been a pleasure to work with Google, and we're glad they helped us to finally bring Truth Social to all Americans, regardless of what device they use," Trump Media and Technology Group (TMTG) chief executive said in a released statement.
TMTG early this month announced today that a Truth Social app was freshly available for people in the United States who use Samsung smartphones, which are powered by customized Android software and have their own app shop.
Samsung's share of the US smartphone market is about 30 percent, according to industry analysis firm Counterpoint.
A version of Truth Social tailored for Apple mobile devices is available at the App Store, which also enforces rules about content moderation.

Google said in August that it had notified Truth Social that its app violated Play policies and required "effective systems for moderating user-generated content" in order to be offered on the platform.
The online giant said at the time that Trump's app broke rules barring content that incites physical threats and violence, but was working on addressing those issues.
Truth Social was conceived as Trump's answer to Twitter—from which he was ejected in January 2021, days after a mob of his supporters refusing to accept his election defeat to Joe Biden stormed the US Capitol.
Also read: Elon Musk says he would lift Twitter ban on Trump
Billionaire Elon Musk, who has made a $44-billion deal to buy Twitter, has said he would likely allow the former US leader back on the platform. After trying to walk away, Musk now says the troubled deal is back on and could close by the end of this month.
Meanwhile, a merger between TMTG and a blank check company named Digital World Acquisition Corp—intended to bring in fresh funding for the Trump platform—has yet to take place. Digital World shares were up more than seven percent to just over $17 in after-market trades in the wake of the Play Store news.

Excluded from major social networks, Trump has regained only a fraction of his followers on Truth Social.
Trump has 4.18 followers at Truth Social, compared to the 88.8 million he had on Twitter and the 35.4 million he had on Facebook before being booted for encouraging real-world violence such as the deadly attack on the US Capitol.
Truth Social has become an online haven for QAnon fans to share conspiracy theories such as prominent members of the Democratic Party being involved with satanists or pedophiles. Misinformation watchdog NewsGuard has reported finding scores of Truth Social accounts sharing QAnon content, with Trump among those resharing posts.
By Glenn CHAPMAN
© Agence France-Presse