With a gamer prince and oil billions, Saudi turns to eSports

Much like with Formula One and professional golf, the world's biggest oil exporter has in recent years leveraged its immense wealth to assert itself on the eSports stage, hosting glitzy conferences and snapping up established tournament organisers 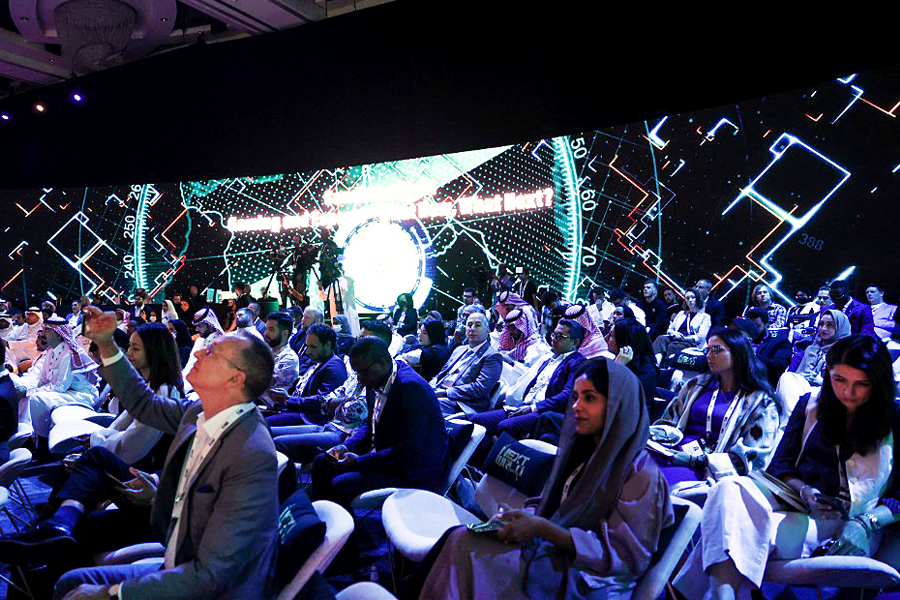 People attend the International E-Sport Gamers forum "Next World", in the Saudi capital Riyadh, on September 7, 2022. Much like with Formula One and professional golf, Saudi Arabia, the world's biggest oil exporter has in recent years leveraged its immense wealth to assert itself on the eSports stage, hosting glitzy conferences and snapping up established tournament organisers. Image: Fayez Nureldine / AFP

Riyadh, Saudi Arabia: Wearing headphones and anti-sweat finger sleeves, gamers from eight countries guided gun-toting avatars through a battle royale in the Saudi capital, as cheering onlookers watched the action on a big screen.
The PUBG Mobile tournament was part of Gamers8, a summer festival spotlighting Saudi Arabia's emergence as a global eSports dynamo—one that officials hope can compete with powerhouses like China and South Korea.
Much like with Formula One and professional golf, the world's biggest oil exporter has in recent years leveraged its immense wealth to assert itself on the eSports stage, hosting glitzy conferences and snapping up established tournament organisers.

These moves have attracted the kind of criticism Saudi officials have come to expect, with some eSports leaders objecting to Riyadh's human rights record.
Yet the lack of long-term financing for eSports makes the industry especially eager to do business with the Saudis, which helps explain why the backlash so far has been relatively muted, analysts say.
Saudi gamers, meanwhile, are revelling in their country's newfound status and the eye-watering prize pools it brings.
"In the past, there was no support," said 22-year-old Faisal Ghafiri, who competed in the PUBG tournament, which featured $3 million in prize money.
"Thank God, now is the best time for me to play eSports and participate in tournaments," he added, noting that what was once a hobby had transformed into a lucrative "job".

Saudi Arabia's interest in gaming and eSports comes from the very top, with Crown Prince Mohammed bin Salman said to be an avid "Call of Duty" player.
The national eSports federation was created in 2017, and the number of eSports teams in the kingdom has since blossomed from two to more than 100.
Survey findings indicate 21 million people—nearly two-thirds the national population—
consider themselves gamers.
In January, the kingdom's sovereign wealth fund launched the Savvy Gaming Group, which acquired top eSports firms ESL Gaming and FACEIT in deals reportedly worth a total of $1.5 billion.
Last week, Prince Mohammed released a national eSports strategy that calls for the kingdom to create some 39,000 eSports-related jobs by 2030 while producing more than 30 games in domestic studios.
Next year Riyadh will host the Global Esports Games, billed as the world's "flagship" competitive eSports event.
"I think what's incredible is that the government has put eSports front and centre, whereas a lot of countries are still trying to work out a positioning," said Chester King, CEO of British Esports.
Also read: For a kingdom with an image problem, golf is seen as a sanitizer
"The investment, I would say, is probably top of the world."
Gaming is also expected to be a major component of headline-grabbing development projects like the Red Sea megacity NEOM, with its planned 170-kilometre-long (105 miles) twin skyscrapers known as The Line.
Yet NEOM is also where Saudi Arabia has encountered its biggest eSports setback.
Two years ago, Riot Games announced a partnership that would have made NEOM a sponsor of the European championship for the game League of Legends.
The outcry was immediate and intense, led by LGBTQ gamers who condemned Saudi Arabia's prohibition of same-sex sexual acts, which can be a capital offence.
League of Legends is considered LGBTQ-friendly, having just last week named gay hip-hop star Lil Nas X as its "president", an honorary title.
Within 24 hours of its NEOM announcement, Riot Games backed out, and Danish tournament organiser BLAST terminated its own deal with the megacity roughly two weeks later.

"Saudi Arabia's reputation will always be a hindrance to the Western eSport community, despite attempts to improve it," said Jason Delestre of the University of Lille, who studies the geopolitics of eSports.
Saudi officials are undeterred, however, and they have deep backing in the eSports world.
"Gaming was always a bit more morally flexible, as they are mostly project-based and lack a sustainable business model," said Tobias Scholz, an eSports expert at the University of Siegen in Germany.
"ESports need the money compared to golf or others."
Also read: Why is esports becoming a significant part of sports marketing in India?
Vlad Marinescu, president of the International Esports Federation, dismissed any suggestion the kingdom was using eSports to engage in reputation-laundering.
"Laundering is a word that has the prerequisite of starting with something dirty. The culture of the Kingdom of Saudi Arabia is beautiful and rich," Marinescu told AFP.
Prince Faisal bin Bandar bin Sultan, chairman of the Saudi Esports Federation, told AFP his vision is for the kingdom to become a natural choice for all eSports programming.
"One of the most amazing things for me is at our recent event, at Gamers8, the amount of young Saudi players who came up to me and said, 'We always loved watching these things, but we never thought we would have it here,'" he recalled.
"And that's the emotion, and that's the image that I want to keep."
By Robbie Corey-Boulet with Salim A. Essaid in Dubai
© Agence France-Presse

Tweets by @forbesindia
The metaverse is changing reality as we know it
US jury orders Meta to pay $174.5 million for patent violation