Exclusive: Tatas to buy 51% stake in BigBasket, Alibaba to exit

The startup and India's biggest online grocer is valued around $2 billion to 2.4 billion, and the Tatas might hike their stake up to 60% in the coming days 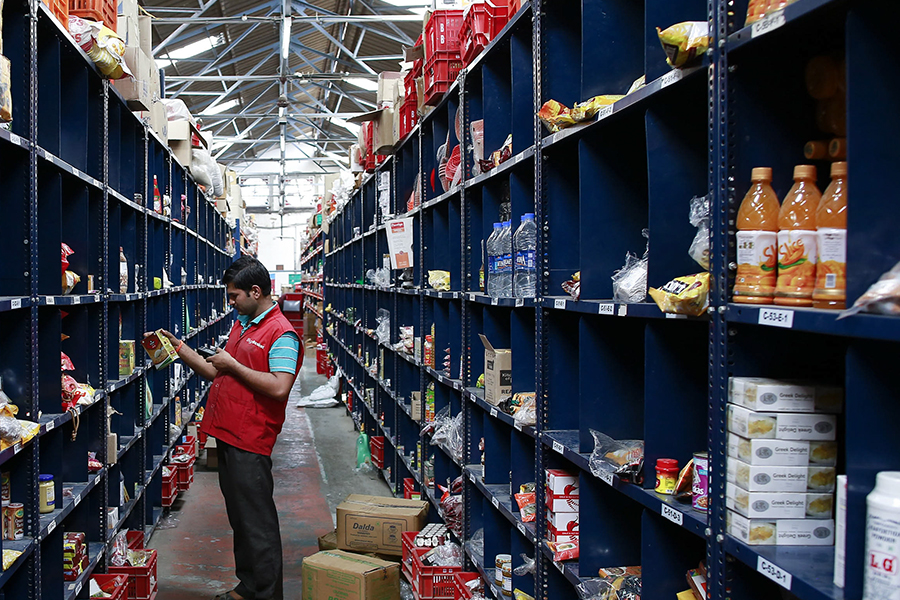 An employee scans a package for an order at a Big Basket warehouse on the outskirts of Mumbai
Photo: Danish Siddiqui/ REUTERS After months of laboured negotiations with BigBasket, the Tata Group will buy a controlling stake of 51% in India’s biggest online grocery player, according to three people close to the development. The salt-to-software major might hike its stake up to 60% in BigBasket—which has been valued at about $2 billion to $2.4 billion—over the next few days, before the final announcement of the deal, say the above sources requesting anonymity. Alibaba, the Chinese ecommerce giant that invested in the etailer in 2018, reportedly holds 28% to 29% stake, will exit from BigBasket apart from other key and early investors. Tata’s BigBasket acquisition pits it directly against Reliance’s JioMart, Amazon, Walmart-owned Flipkart as well as other players such as Grofers. The closing of deal might also speed up Tata Group’s efforts to buy out pharma etailer 1mg which has been stuck over equity issues. Tatas, one of the sources says, would now look to buy a controlling stake in 1mg.   Tata Group declined to comment on the BigBasket buyout. Hari Menon, one of the cofounders of BigBasket, didn’t reply to an email sent by Forbes India.   BigBasket posted a revenue of Rs 5,200 crore and a loss of Rs 920 crore in FY19. While Innovative Retail Concept, the B2C arm of BigBasket, posted revenues of Rs 2,381 crore and losses of Rs 348 crore, the corresponding numbers for Supermarket Grocery—which handles B2B part of the business—stood at Rs 2,803 crore and Rs 563 crore, respectively, according to data sourced from Tofler. The FY20 data is not yet available. In September, BigBasket—which has been frantically trying to find non-Chinese backers to replace Alibaba—was reportedly in talks with Singapore investor Temasek, along with a bunch of other potential backers for a $400 million funding. The deal, however, fell through over valuation and management stake issues. Apart from Alibaba, other existing backers of BigBasket include Abraaj Group, Ascent Capital, Helion Venture Partners, Bessemer Venture Partners, Mirae Asset Naver Asia, International Finance Corporation, Sands Capital, and CDC Group.

Tweets by @forbesindia
Trump Lost the 2020 Election. He Has Raised $207.5 Million Since
Ten interesting things we read this week