As families are forced to migrate after disasters, many children leave school never to go back again, raising the school dropout rate to over 17 percent in 2021, while UNICEF says 1.7 million children of the country are now working 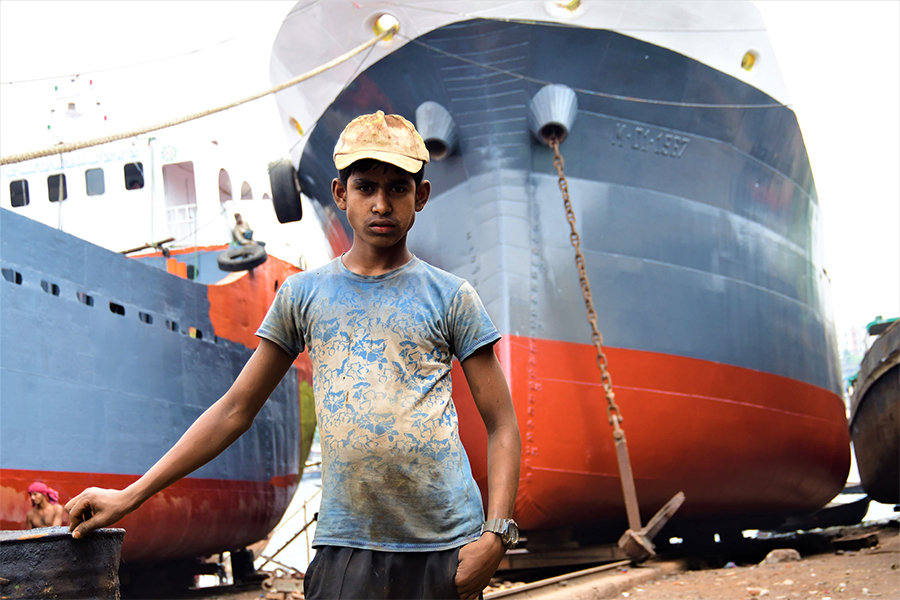 Alamin, 12, whose family lost their home to climate change-driven erosion, works as part of a shipbreaking crew in Keraniganj, close to Dhaka, Bangladesh, March 22, 2022. Image: Thomson Reuters Foundation/Mosabber Hossain
DHAKA, May 9 (Thomson Reuters Foundation) - Twelve-year-old Alamin's house rested on the bank of the Ilsha river in southern Bangladesh until last year, when the surging river eroded it and the family's farmland away, forcing them to flee to a slum in Keraniganj, close to the capital Dhaka.

Now Alamin - whose father died of cancer a couple years back - works on a shipbreaking crew and his mother cooks for the workers. Together they earn just enough to feed and house themselves and Alamin's two younger siblings, now 3 and 5.

"Once we were solvent. My husband earned from our cultivable land and my son was reading in a local primary school," said Amina Begum, Alamin's mother.

But after losing their property to the river and their savings to failed cancer treatments, work is all Alamin can now expect, she lamented.

As more extreme weather drives worsening flooding, erosion and storms in low-lying Bangladesh, thousands of families like hers are moving to the slums of Dhaka.

For many of their children - who are battling climate change impacts alongside their parents - the move means the end of education, and the start of a lifetime of hard work.

Globally about a billion children in 33 countries face that level of threat, it added.

“For the first time, we have clear evidence of the impact of climate change on millions of children in South Asia," said George Laryea-Adjei, UNICEF's regional director for South Asia, in the report.

Droughts, floods and river erosion across the region have left millions of children homeless, hungry, lacking healthcare and safe water - and in many cases out of school, UNICEF officials said.

In Bangladesh, a fertile delta nation of close to 700 rivers, a difficult combination of more flood-driven erosion and little land for resettlement is driving many once-rural families into urban slums.

Children, who make up about 40% of the population of the country of more than 160 million, are paying a particularly high price in the move, researchers say.

Most Bangladeshi children not attending primary school live in urban slums, or in hard-to-reach or disaster-prone areas, according to UNICEF.

About 1.7 million children in the country are labourers, one in four of them 11 years old or younger, the agency's research shows. Girls, who often work as domestic labourers, rarely even show up in the statistics, UNICEF noted.
In slums around Dhaka, children are evident working in tanneries, shipyards, tailoring, or repairing automobiles.

Others labour at vegetable markets or carrying luggage in bus, train and boat terminals.

Many say they once lived in the countryside, before being forced to the city. 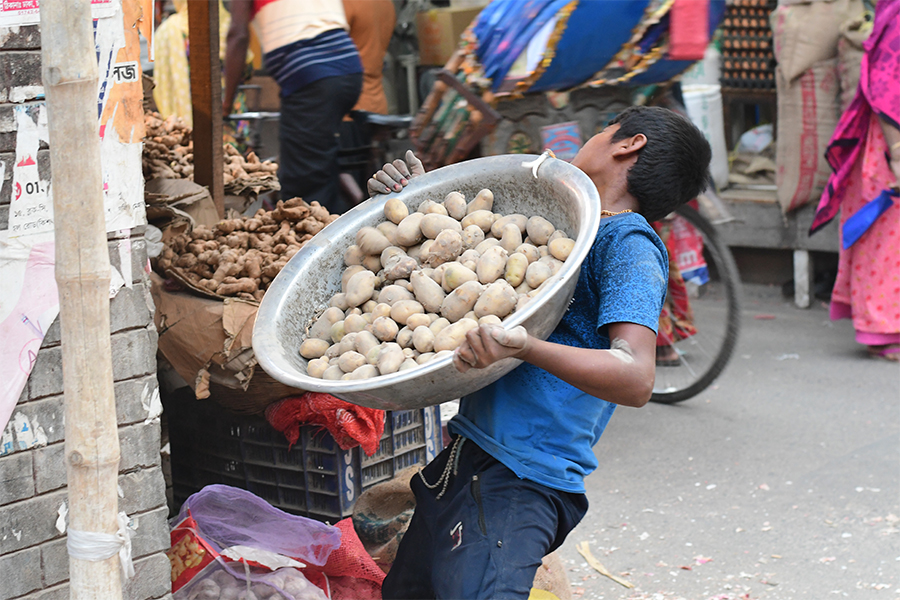 A sweating Alauddin, 10, has worked at a vegetable market in Dhaka for a few months now, carrying out tasks such as cleaning and shifting potatoes in metal bowls he can scarcely budge.

He said he used to study at Debraipatch Primary School, near the northeast city of Jamalpur, until a powerful flood last year wrecked the school and his family's home and land.

They moved to a Dhaka slum, where his father now pulls a rickshaw and his mother works part-time as a cleaner at a private school.

Alauddin's work contributes 100 taka ($1.15) a day to the family finances, money the family can't do without, his father said.

“My children will never go back to school," he admitted. "We are struggling with rent and our daily livelihood. How would we bear (my son's) educational expenses?"

Mohibul Hasan Chowdhury, Bangladesh's deputy state minister of education, said in a telephone interview with the Thomson Reuters Foundation that floods last year inundated more than 500 educational institutions in 10 districts across the country.

While a few were entirely washed away, most have since dried out - but only a few have been repaired sufficiently to be available for classes, he said.

The new flood-related closures come on the heels of long pandemic-related shutdowns, and mean even children who do not have to work are still out of classrooms in many places.

Global warming impacts were a top driver of that flight from classrooms, educational officials said.
Alamgir Mohammad Mansurul Alam, director general of the Directorate of Primary Education, called the drop-out rate "alarming" and noted "one of the big reasons is climate change".

"Last year we observed that more than 500 schools were damaged by flooding. The students could not go school for a long time," he said in an interview.

What became evident, he said, is that "a large number of them never come back to school and are involved in different work to support their family.”

Altogether 37 million children in Bangladesh have seen their education disrupted by school closures since the start of the pandemic in 2020, according to an October report by UNICEF and UNESCO, the U.N. Educational, Scientific and Cultural Organization.

Rupa, 9, is among the children now in work instead of school.

After her family's home in Khulna Shyamnagar was destroyed by a cyclone last year, her family came to join an aunt living in a slum near Dhaka. 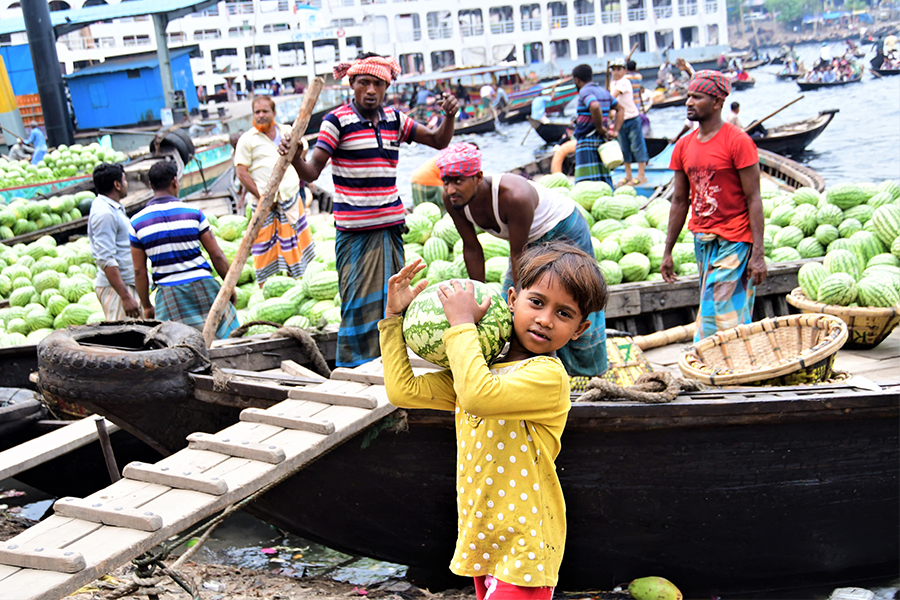 Rupa's mother eventually abandoned her blind husband, who could not work, leaving her daughter behind with him. The girl now earns 100 taka ($1.15) a day helping unload watermelons at the wharf.

"I realize it's really hard for a little girl to work with adult workers but I'm helpless. I also have a year-old baby and family to maintain," said her aunt, who works as a cook.

Syeda Munira Sultana, national project coordinator for the International Labour Organization in Bangladesh, said she had met many girls like Rupa, forced into work by extreme weather or other climate change impacts.

"I was surprised to see many girls younger than 10 years old working in a factory near Keraniganj, where women's dresses are produced," she said.

"I talked to them and they said most of them came from climate-vulnerable areas like Barisal, Khulna and Satkhira - and all of them are dropouts from school," she added.

Children forced to work can face both physical and mental harm as well as losing their chance at an education, which can restrict their future opportunities and lead to inter-generational cycles of poverty and child labour, said Tuomo Poutiainen, director of the ILO's Bangladesh office.

Tweets by @forbesindia
Three decades after Pablo Escobar's death, drugs ravage Medellin
All that glitters: How the money-spinning IPL turned cricket into gold