'Lungs of the Mediterranean' off Tunisia at risk

Seagrass is a key store of carbon and producer of oxygen—critical to slowing the devastating impacts of climate change—but, just as human actions elsewhere are devastating forests of trees on land, scientists warn that human activity is driving the grass under the sea to destruction at speed 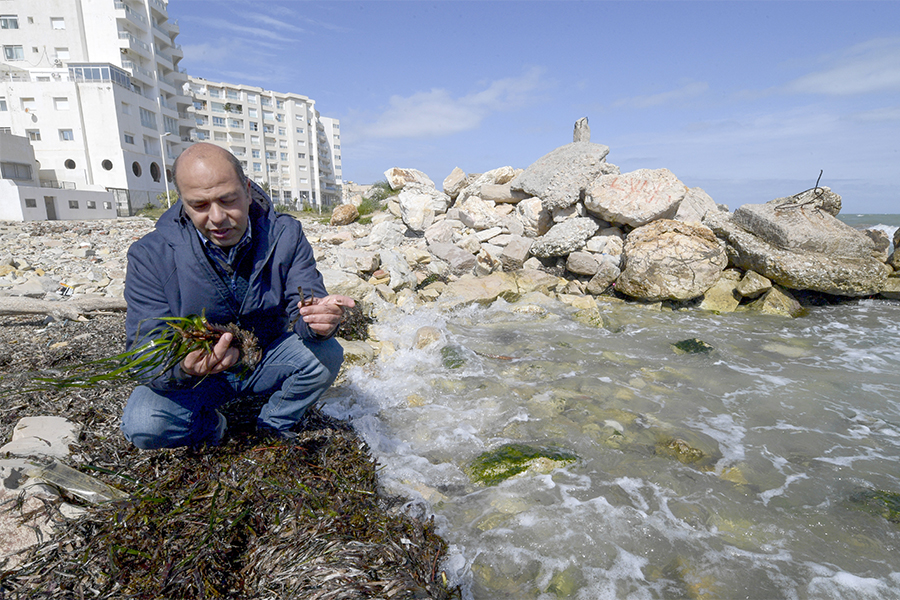 Tunisian marine biologist Yassine Ramzi Sghaier inspects a marine plant, from the Posidonia genus, in the capital Tunis on March 14, 2022. Under the Mediterranean waters off Tunisia, gently-waving green seagrass meadows provide vital marine habitats for the fishing fleets and an erosion buffer for the beaches. (Credit: FETHI BELAID / AFP)

​Monastir, Tunisia: Under the Mediterranean waters off Tunisia, gently waving green seagrass meadows provide vital marine habitats for the fishing fleets and an erosion buffer for the beaches the tourism industry depends on.
Even more importantly, seagrass is such a key store of carbon and producer of oxygen— critical to slowing the devastating impacts of climate change—that the Mediterranean Wetlands Initiative (MedWet) calls it "the lungs" of the sea.
But, just as human actions elsewhere are devastating forests of trees on land, scientists warn that human activity is driving the grass under the sea to destruction at speed—with dire environmental and economic impacts.
Named Posidonia oceanica after the Greek god of the sea Poseidon, seagrass spans the Mediterranean seabed from Cyprus to Spain, sucking in carbon and curbing water acidity.

"Posidonia oceanica... is one of the most important sources of oxygen provided to coastal waters," MedWet, a 27-member regional intergovernmental network, says.
Tunisia, on the North African coastline, "has the largest meadows" of all—spreading over 10,000 square kilometres (3,900 square miles), marine ecologist Rym Zakhama-Sraieb said, pointing to its key carbon-capture role.
The underwater flowering plants absorb three times more blue carbon—the term used to describe the removal of carbon dioxide from the atmosphere by the ocean and coastal ecosystems—than a forest, and they can store it for thousands of years, she said.
"We need Posidonia to capture a maximum of carbon," Zakhama-Sraieb said.
But a dangerous cocktail of rampant pollution, illegal fishing using bottom trawling nets that rip up the seagrass, and a failure by people to appreciate its life-giving importance is spelling its demise.

'Sea has been destroyed'

Growing at a depth of up to 50 metres (165 feet), seagrass provides shelter for fish and slows the erosion of coastlines by breaking wave swells that would otherwise damage the sandy beaches that tourists like.
Tunisian marine biologist Yassine Ramzi Sghaier said the grass is crucial for a country already gripped by a grinding economic crisis.
"All of Tunisia's economic activity depends on Posidonia," Sghaier said.
"It is the largest provider of jobs," he claimed, noting that at least 150,000 people are directly employed in fishing and tens of thousands in the tourism industry.
Destruction has been swift, and replacement slow. The aquatic plant, also known as Neptune grass, grows less than five centimetres a year.
Areas of seagrass meadows have been slashed by more than half in the Gulf of Gabes, a vast area on Tunisia's eastern coast, Sghaier said, with a 2010 study blaming excessive fishing and pollution.
Once Posidonia and a wealth of marine species thrived there, but since the 1970s, phosphate factories have poured chemicals into the sea, causing more damage to the ecosystem.
Seagrass serves as a vital shelter for fish to breed, feed and shelter.
Fishing makes up 13 percent of Tunisia's GDP, and nearly 40 percent of it is done around seagrass meadows—and fisherman describe plummeting stocks.
"The sea has been destroyed," said Mazen Magdiche, who casts his nets from the port of Monastir. "Chemicals are dumped everywhere."
Magdiche calculates his catch is three times less than what it was 25 years ago, but said he had little alternative income.
"There are fewer and fewer fish," he said.
"You are not looking out for the interests of the sea, but to feed your children," he added.

Nearly 70 percent of the Tunisian population lives on 1,400 kilometres (nearly 900 miles) of coastline, and for many Posidonia is considered mere rubbish.
When seagrass is washed up onshore, it mixes with sand to form large banks, that protect the coastline from swells and waves, experts say.
But sometimes bulldozers are used to "clean" the beaches, contributing to the acceleration of coastal erosion, with some 44 percent of beaches already at risk of being washed away.
"We are helping to make beaches disappear by removing the (seagrass) banks," said Ahmed Ben Hmida, of Tunisia's Coastal Protection and Development Agency.
Beaches are a key asset for tourism, which provided Tunisia with a record 14 percent of GDP in 2019, and a living for up to two million people—a sixth of the population.
The aquatic plant also improves the quality of water, making the beaches more attractive for tourists, said Zakhama-Sraieb.
Ben Hmida said the creation of four protected marine zones could help Posidonia, but that action was needed on a far wider scale.
"If nothing is done to protect the whole Tunisian Posidonia, it will be a catastrophe," he said.
By Amal Belalloufi
© Agence France-Presse

Tweets by @forbesindia
23.5 million tickets sought in latest World Cup sale: FIFA
How quick commerce can become a game-changer in the ecommerce business in India