From Germany to Australia, the Great Resignation is putting businesses worldover on the backfoot 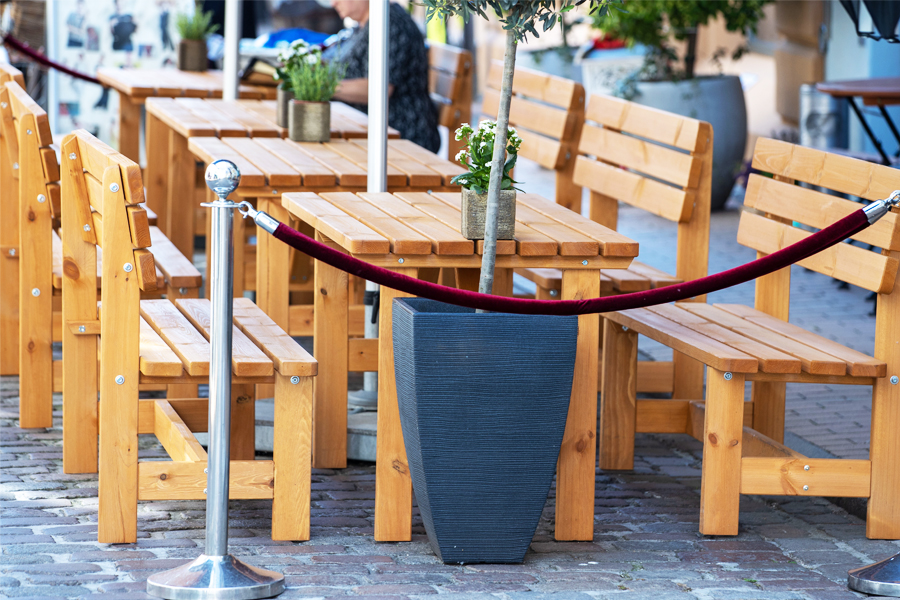 Empty tables in front of a restaurant in the old town of Schwerin, Germany. The shortage of skilled workers in the restaurant and catering industry has caused severe losses during the peak tourism season. Image: Jens Büttner/picture alliance via Getty Images

Paris, France: Germany has a shortage of plumbers. The United States needs more postal workers. Australia is lacking engineers. In Canada, hospitals are looking for more nurses.
"The Great Resignation" that countries have experienced since Covid pandemic restrictions were eased is not over yet.
Michael Blume, chief executive of a software company in eastern Germany, said he had "a lot of difficulties finding workers".
"Wherever we look, we are lacking qualified workers," Blume, whose firm Currentsystem23 is based in eastern Germany, told AFP.

There were 887,000 job vacancies in Germany—Europe's biggest economy—in August, some 108,000 openings more than last year.
"Help Wanted" signs are plastered in front of restaurants and other businesses in the United States, where there were more than 11 million job openings in late July, or two for every employment seeker.
"Vacancy rates are very high across the world. Surveys and firms are saying it is still very hard to fill positions," said Ariane Curtis, a Toronto-based economist at research firm Capital Economics.
Countries in Western Europe and North America are having a particularly tough time filling jobs, though the problem is also present in eastern Europe, Turkey and Latin America, Curtis said.
Vacancy-to-unemployed rates rose sharply in Australia, Canada and Britain in later 2021 compared to pre-pandemic levels, an OECD report said in July.

The shortages have persisted even as the world economy has begun to slow since Russia invaded Ukraine earlier this year.
It affects a broad range of sectors: from a lack of teachers in Texas to not enough staff in the hospitality industry in Italy or the Canadian health system.
The shortages have forced businesses to adapt.
Also read: Great resignation wave: How India's HR can weather the storm
Pharmacies in the US state of Wisconsin, services at hospitals in Canada's province of Alberta and restaurants in Australia's Sunshine Coast have had to close for parts of the day, according to local news reports.
White-collar workers are also in short supply.
Clement Verrier, who co-heads an executive recruiting firm in Paris, said it used to be difficult to find companies looking to hire. Now it's the opposite.
"We're seeing an unprecedented number of candidates who disappear in the middle of the recruitment process, without calling back," Verrier said.

Aging populations were already starting to cause shortages before Covid, but the problem exploded with the pandemic.
There are multiple factors behind the phenomenon: some people have chosen to retire early, while others have struggled with long Covid symptoms. Others have simply had enough of poor working conditions or low salaries.
Other factors include a drastic drop in immigration due to lockdowns, people moving out of cities and workers seizing the moment to rethink their career choices.
"The pandemic drove a fundamental shift in mindset and priorities, and employers aren't keeping pace with that change," said Bonnie Dowling, expert associate partner at McKinsey, a global consultancy that conducted a study on the wave of resignations around the world.
To keep or woo workers, companies are offering higher salaries. Other benefits that have emerged include the option of working from home, "bonus" holidays and more personal days.
Some countries are easing their immigration rules to attract more workers.
Also read: Inside the #quitmyjob trend: Recording and posting your resignation
Germany unveiled plans Wednesday to make it easier for people to hold multiple nationalities and make naturalisation of foreigners easier.
"The big question is if what we have seen in the last months will cool down or not," said Mike Smith, CEO of Netherlands-based international recruiter Randstad Sourceright.
"From our position we don't believe it is transitory," he said.
"We think it is a structural change in the way employees are looking to interact with work. Trends continue to point to that. The shift in worker expectations is here to stay."
© Agence France-Presse

Tweets by @forbesindia
Agritech startups have arrived. What will it take to scale impact and profits?
From BP to Shell: Energy majors exaggerate green performance while drilling deeper into oil, gas