Members of Ethiopian Girl Skaters, an all-female group, are pushing back against gender stereotypes and having fun doing it 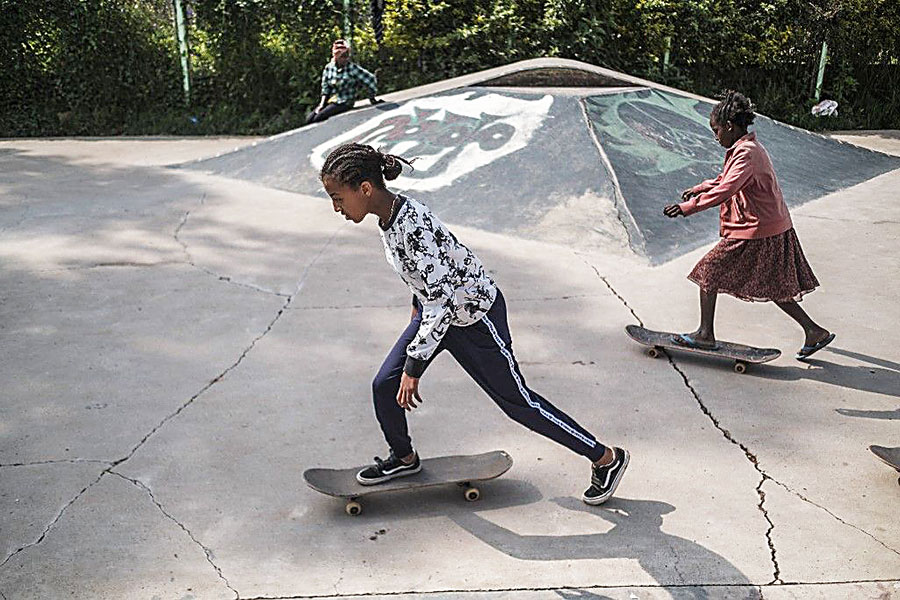 Members of Ethiopian Girl Skaters, an all-female group, are pushing back against gender stereotypes and having fun doing it. Image: Eduardo Soteras / AFP

Dressed in jeans, sweatpants and abayas, dozens of Ethiopian schoolgirls practise the art of nailing a landing and finding their balance—and their confidence—as they zip across a skatepark in Addis Ababa.

Some gingerly slide forward a few metres, holding a friend's hand for support, while others zoom across ramps and concrete bumps at full speed.

Members of Ethiopian Girl Skaters, an all-female group set up by skateboarders Sosina Challa and Micky Asfaw, the girls—some as young as six—are pushing back against gender stereotypes and having fun doing it.

Challa, 24, told AFP she set up the organisation to empower young women, who often struggle to take up extreme sports because of a commonly-held belief in Ethiopia that "girls should stay home and help their parents".

Since she co-founded the group in December 2020, she and the other mentors in the organisation have taught more than 150 girls how to skate.

Hanna Bless, a 22-year-old stylist who started skateboarding two years ago, told AFP: "It's not really common for a girl to start skating because people don't support you.

"But somebody had to be the first, some group had to start and we were the first one and I feel honoured to be part of that," she added.

Although Ethiopia is home to many skateboarding groups, they are largely dominated by male skaters.

With time, the women skateboarders have learned to cope not just with the inevitable bruises the sport brings but also the criticism from naysayers.

Iman Mahamud, 17, told AFP that after 18 months of lessons, she no longer cared about "what people say about me being a girl and doing such stuff".

"It helped me defeat my fears," she said.

"I just enjoy it. It makes me happy."