Sanctions, decades of conflict and a hardening of conservative social values had brought Iraq's proud tradition of women in sports to a close. There has been a timid reversal in recent years, with women taking up a range of sports, also including kickboxing 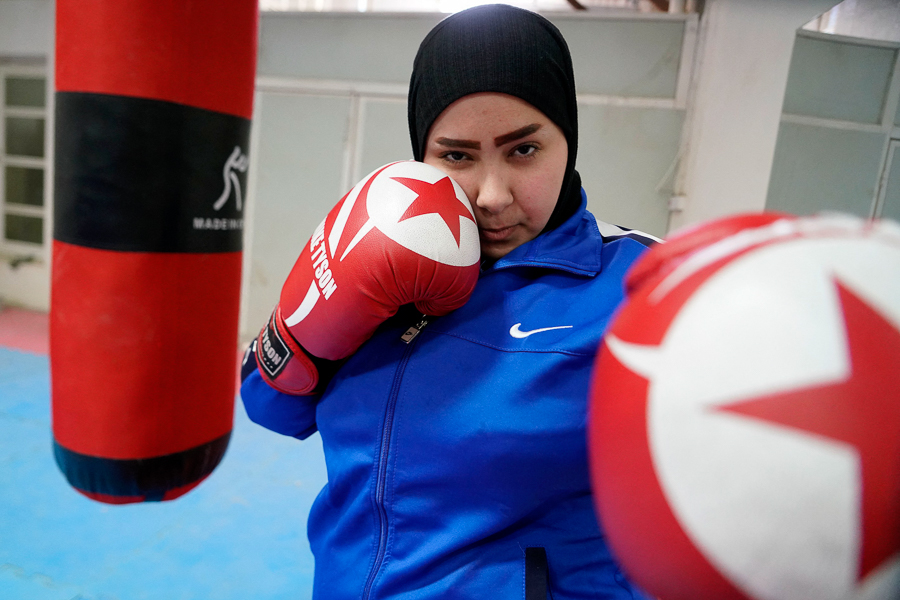 Iraqi Ola Mustafa, 16, is pictured during a training boxing session at the Islamic University in Najaf.
Image: Qassem al-Kaabi / AFP

Iraqi boxer Bushra al-Hajjar jumps into the ring, gloves raised to eye level, and strikes out at her sparring partner.

Her bigger struggle, though, is to deliver a blow against social taboos.

In Iraq's Shiite Muslim holy city of Najaf, the sight of a women's boxing hall is unusual but, like others here, the 35-year-old boxing instructor is fighting deeply-ingrained taboos.

"At home, I have a full training room, with mats and a punching bag," said the mother of two, who also practises karate.

Hajjar won gold in the 70 kilogram-class at a boxing tournament in the capital Baghdad in December.

"My family and friends are very supportive, they're very happy with the level I've reached," she said, a blue headscarf pulled tightly over her hair.

Twice a week, she trains at a private university in Najaf, 100 kilometres (60 miles) south of Baghdad, where she also teaches sports.

In overwhelmingly conservative Iraq, and particularly in Najaf, Hajjar acknowledges her adventure has raised eyebrows.

"We've come across many difficulties," she said. "We're a conservative society that has difficulty accepting these kinds of things."

She recalls the protests when training facilities first opened for women, but said "today, there are many halls".

Boxing student Ola Mustafa, 16, taking a break from her punching bag, said: "We live in a macho society that opposes success for women."

However, she said she has the support not only of her trainer but also of her parents and brother, signalling that social change is afoot.

"People are gradually beginning to accept it," she said. "If more girls try it out, society will automatically come to accept it."

Iraqi boxing federation president Ali Taklif acknowledges that Iraqi women engaging in the sport is a "recent phenomenon", but says it is gaining ground.

"There is a lot of demand from females wanting to join," he said, adding that Iraq now has some 20 women's boxing clubs.

More than 100 women boxers have competed in a December tournament, in all categories, he added.

But "like other sports (in Iraq), the discipline suffers from a lack of infrastructure, training facilities and equipment".

From father to daughters

In the past, Iraq had a proud tradition of women in sports, especially in the 1970s and 1980s.

But sanctions, decades of conflict and a hardening of conservative social values brought this era to a close, with only the autonomous Kurdistan region in northern Iraq largely spared.

There has been a timid reversal in recent years, with women taking up a range of sports, also including kickboxing.

For Hajer Ghazi, who at age 13 won a silver medal in December, boxing runs in the family.

Her father, a veteran professional boxer, encouraged his children to follow in his footsteps.

Both her sisters and older brother Ali are also boxers.

"Our father supports us more than the state does," said Ali in their hometown of Amara in southwestern Iraq.

The father, Hassanein Ghazi, a 55-year-old truck driver who won several medals in his heyday, insists: "Women have the right to play sports, it's only normal."

As an example, he pointed out that "when their coach wants them to run, he takes them to the outskirts of town", away from too many onlookers.

Tweets by @forbesindia
Storyboard18 - The rise of 'key opinion leaders' in the celebrity vs creator battle
Do not help crashed Olympics vehicles, Beijing police warn