At 23, the golfer has catapulted India on to the world stage with a fourth-place finish at the 2020 Tokyo Olympics. And she's only getting started 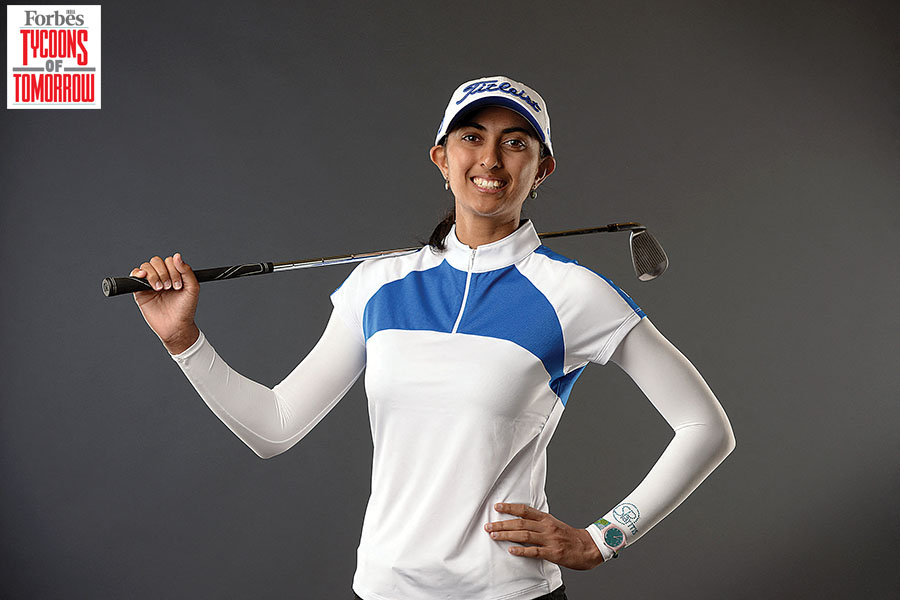 Aditi Ashok started playing golf with her parents on weekends when she was five-and-a-half years old. At six and two months, she played an 18-hole course, the standard that’s manoeuvered by pros. Not often do you expect six-year-olds to hang around for a game that spans four-plus hours. It didn’t take her parents much convincing, thus, when she wanted to play golf for a living.

Back then, few in India had heard of women golfers; even the exploits of men like Jeev Milkha Singh, Anirban Lahiri, Gaganjeet Bhullar and Jyoti Randhawa were followed by only a niche set of fans. But Aditi showed the passion and perseverance—including waking up at 5.30 am on weekends to practice before peak hour—to turn traditions on their heads despite the absence of a role model or a roadmap.

When she was seven, Aditi won her first junior tournament. “The win motivated me to keep practising, so that I could play more tournaments. I really enjoyed playing tournaments,” she says. Two years later, she visited the first ladies European tour event that was taking place in India—in 2007, at the Eagleton Golf Resort in Bidadi, Karnataka. “I was one of those kids walking around, collecting autographs, watching players,” says the Bengaluru resident. “It was also the first time I saw what professional women’s golf was like. That event made me want to do what the ladies were doing. From age 10, everything I was doing was to help me head in that direction.”

Fourteen years on, life has come full circle. Aditi (23) has crossed over to the other side where she can make an entire nation wake up at 5 am to watch her play. She began the Tokyo Olympics in August as World No 200—no one gave her much of a chance to make a mark, except for a footnote in Indian sports history as the first woman golfer to qualify for two consecutive Olympics. By the time she was done, she finished fourth, within sniffing distance of the bronze medal, going neck-and-neck with top golfers for most of the tournament. An average Indian might still not be able to tell a birdie from a bogey, but post-Tokyo, everyone knows who Aditi Ashok is. 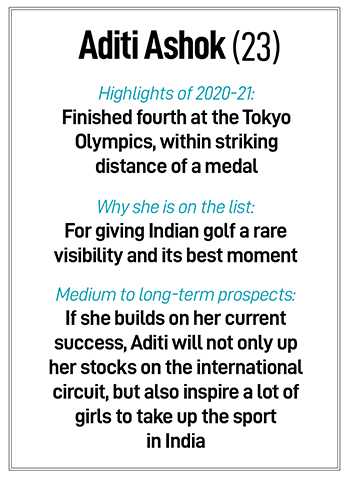 “The way she played at the Olympics was outstanding,” says Jeev Milkha Singh, a four-time European tour champion and the first Indian golfer to break into the top 100. “She had just recovered from Covid, was weak and was driving the ball 30 to 40 yards shorter than the other girls. Yet she came so close to winning a medal.”

Despite the relative obscurity of golf, especially the women’s game, in India, Aditi set her sights high right from the beginning. “I wasn’t focussed on playing in India. I always had the motivation to reach the LPGA [the American tour],” says Aditi, who turned pro in 2016, also the year she won the European tour’s Rookie of the Year award. “To prepare for that, I was keen on playing more tournaments, where Indians usually wouldn’t compete.”

When she was 14, Aditi heard that golf would be included in the 2016 Olympics. It gave her the impetus to compete in professional tournaments even as an amateur and gather the experience and expertise to represent India in the prestigious event. At 18, she became the first Indian woman golfer to head to the Rio Olympics, months after she completed her Class 12 board exams. While she finished 41st in the tournament, Aditi, the youngest golfer on the field, returned with a bagful of takeaways. “I couldn’t deal with a different playing condition and the situation of being in the Olympics. I did well in the first two days, but then began to slip. I realised I had to improve as a golfer,” she says.

The next year, she qualified for the LPGA, and has been playing there every year since. Pitted against the world’s best golfers, the highly competitive LPGA circuit helped her identify her weaknesses and act on them. “That was the big difference in Tokyo. In the LPGA, I spent several seasons playing against the top 100 golfers every week,” says Aditi. “It conditioned my game and made me a much better player from Rio.”

“I know finishing fourth isn’t great when they give out three medals,” she adds. “But it was still good to be part of a world-class field and hold my own.”

With her spectacular performance, Aditi has given women’s golf a visibility like never before. Says Singh, “She’s given hope to not just the women, but every golfer to go out there and become champions. Her performance in the Olympics has opened up a lot of doors and dreams for Indian golfers.”

Tweets by @forbesindia
If people are not aligned to company's vision, there's no way it can work: Postman's Abhinav Asthana
Want to build better leaders? Focus on mindset, skills, knowledge