Infra.Market's Aaditya Sharda is not motivated by money. He wants to create history

Infra.Market's massive business-to-retail play makes it one of the most exciting startups to watch out for. And co-founder Aaditya Sharda wants to make it an enduring company 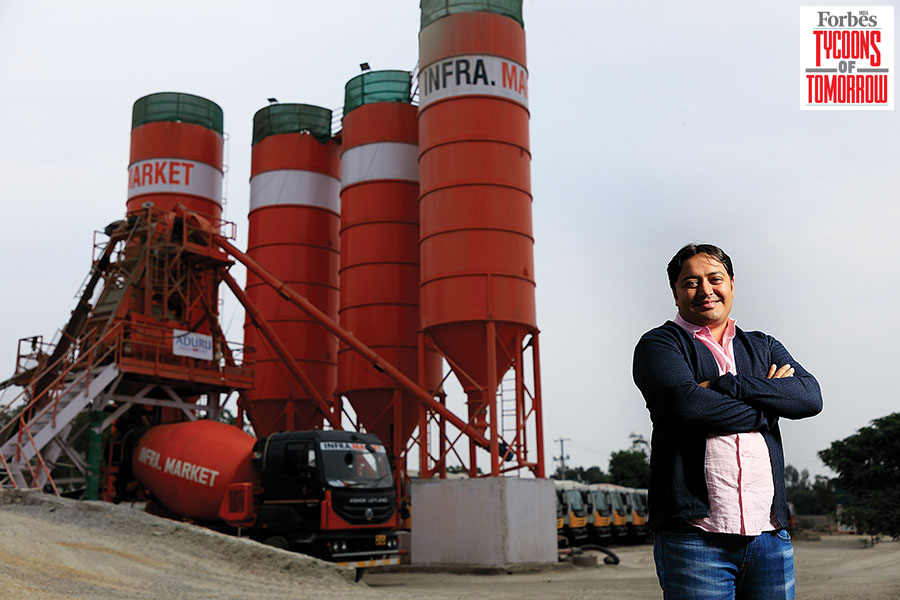 Exciting is boring for Aaditya Sharda. So a jump in Infra.Market’s valuation from a billion dollars in March to $2.5 billion in August is not exciting for the co-founder of the largest B2B online infra procurement platform in India. Even a staggering rise in revenue—from ₹12.5 crore in FY17 to ₹1,242 crore in FY21—is mundane for the first-generation entrepreneur who, along with friend Souvik Sengupta, started Infra.Market in 2016. For the 36-year-old, the fact that his startup happens to be one of the rare profitable unicorns in India is also nothing much to talk about. “What excites me,” he reveals, “is something super exciting.”

For Sharda, super exciting is Infra.Market’s expansive business-to-retail (B2R) and private label play. The five-year-old startup has two parts to his business, he says, explaining how the Mumbai-headquartered company is structured. First is B2B, which has big infrastructure and real estate players as consumers. And then comes B2R, which has SMEs, small contractors and vendors. Private labels, interestingly, make up around 60 percent of revenue for Infra.Market, which has its own branded concrete, aggregates, walling solutions, construction chemicals bath fittings, and sanitary tiles.

Over the last 12 months, the Infra.Market juggernaut has only gathered steam. It has expanded beyond Maharashtra and made inroads into Telangana, Karnataka, Kochi, and recently forayed into North India, including Delhi-NCR. The firm now has 25 exclusive franchisee stores across 10 cities; over 1,500 distributors and 5,000 retailer touchpoints and more than 620 dealer-owned and dealer-operated stores across 50 cities and towns. “LED lights and fans are the two new categories that we have now entered into,” he says, underlining his widening private label strategy. 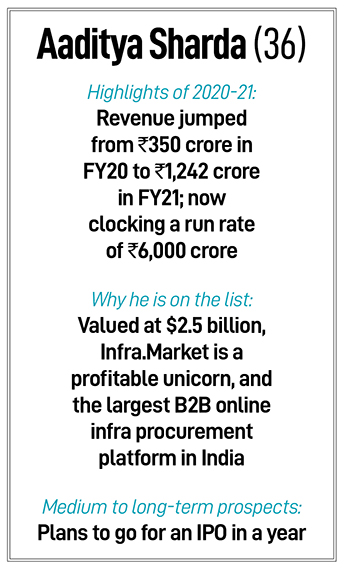 The company has also beefed up its growth via acquisition strategy. While in May, it bought Hyderabad-based construction equipment rental player Equiphunt for $10 million, in September, it snapped RDC Concrete, the largest independent ready-mix concrete player in India, for $100 million. “We are about to buy a big electrical player based out of North India,” says Sharda, declining to reveal more.

Infra.Market’s backers are impressed. “I do not think there is any player in India with private labels at this scale,” says Prashanth Prakash, founding partner of Accel. Underlining that a multi-category play is more prevalent in FMCG, and not in infra, the venture capitalist reckons that Infra.Market is breaking into new territory, and setting a new paradigm on how multi-category brands can be built.

Sharda, for his part, wants to build an enduring company. Conventionally, the word tycoon has strong financial connotation attached to it. “I do not believe in paper valuation,” he says, adding that he is not into business for the lure of money. “It does not excite me,” he says, stressing that he still draws a salary and cannot afford a fancy lifestyle. The co-founder comes up with a new meaning for a tycoon: Somebody excelling in whatever he or she is doing. Five years into the journey, and Infra.Market has disrupted the construction and infrastructure industry. “We just want to focus on excellence. The rest is merely an outcome,” says the new-age, self-made tycoon.

Tweets by @forbesindia
What trends will Gen Z lead in 2022? Instagram investigates
Best of 2021 Ep. 2: Manish Gupta on how Indegene disrupted the way drug companies communicated with the market