Tycoons of Tomorrow 2021: From here to futurity

Forbes India's second list of Tycoons of Tomorrow does not—like the first—restrict only to the world of business and entrepreneurship. We have actors and sportspersons who are pushing the boundaries of creativity and performance 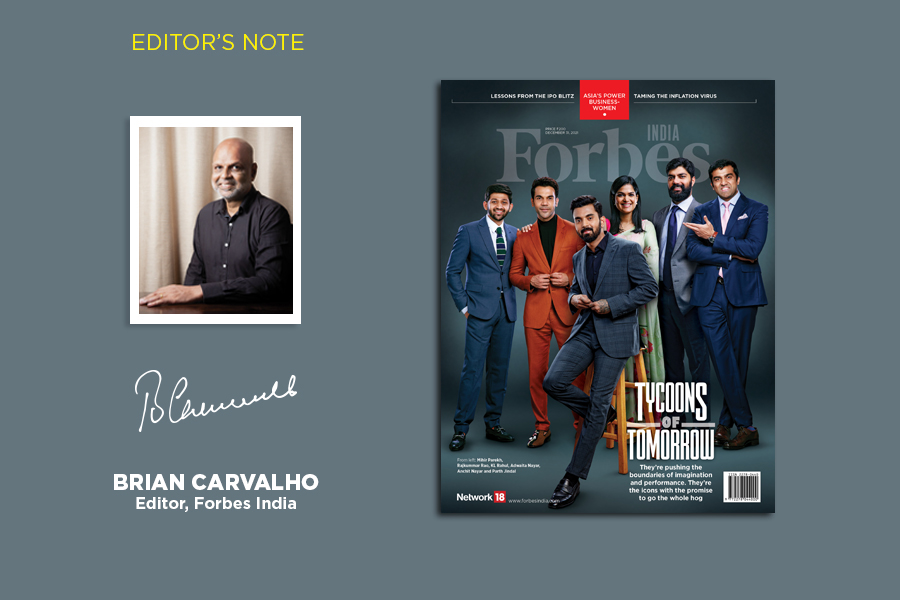 Oliver Stone’s 1987 drama on the world of edgy stock trading, Wall Street, is best remembered for financier-cum-corporate raider Gordon Gekko’s pontifications on greed. Taking off from Scottish economist and philosopher Adam Smith’s belief that greed promotes economic efficiency, Gekko holds forth on the virtues of the ‘deadly sin’: “The point is, ladies and gentlemen, that greed—for lack of a better word—is good. Greed is right. Greed works. Greed clarifies, cuts through, and captures the essence of the evolutionary spirt. Greed, in all of its forms—greed for life, for money, for love, knowledge—has marked the upward surge of mankind.”

Gekko is a hero for junior stockbroker Bud Fox, who is willing to go to any extent—insider trading included—to impress the poster boy. Until it all unravels. Fox’s airline mechanic father offers him an alternative to put food on the table: “Stop going for the easy buck and start producing something with your life. Create, instead of living off the buying and selling of others.”

Fox Senior may seem a relic of a working-class hero in an age in which the naked hunger for creating wealth (total value of assets like stocks and stock options) may be trumping income-generation (a salary). Yet, the value of his statement lies in one word: “Create.” The rest—wealth, fame, power, respect—may follow. When it does for a select few, the world anoints them barons or moguls. Or tycoons.

The reference to the Wall Street anecdote is to affirm that rich pickings alone do not a tycoon make. Before the billions pour in, you need to craft a plan that’s built to last and is differentiated by its sheer superior performance. An entrepreneur, for instance, should be starting with a product or technology that, as Peter Thiel would put it, is 10x better than the closest in the market. And then you need to execute the plan. You need to perform.

Performance, of course, does not need to start and end with startup founders. Which is why Forbes India’s second list of Tycoons of Tomorrow does not—like the first—restrict itself only to the world of business and entrepreneurship. We have actors and sportspersons who are pushing the boundaries of creativity and performance. Consider, for instance, golfer Aditi Ashok, perhaps an unknown entity in most parts of the country till the Tokyo Olympics. For those who did follow golf, Aditi would have at best been a gallant qualifier; expectations would have been minimal from somebody ranked 200 in the world.

Aditi missed a medal by a whisker, but the good news is that, at 23, she’s got—as the venture capitalists will jargonise—a long runway ahead.

Can Aditi be a Tycoon of Tomorrow? It’s some way off but, aside from cricketers, she’s perhaps best placed among Indian sportspersons to win big—on and off the field. The world’s top golfers, after all, are worth hundreds of millions of dollars, much of it from off-course revenue streams like endorsements and licensing.

But, to reiterate, before the riches must come the performance. As the Forbes India team that worked for two months on shortening a long list of potential tycoons figured, the Tycoons of Tomorrow are those ladies and gentlemen who are still on a journey—one of imagination, creativity, and implementation.

The icons we’ve chosen have passed several milestones. However, they’ve only begun. Up ahead, along with more victories, will lie setbacks, rapid change and uncertainty. Not all will make it. But that’s okay, if they’re able to cherish the ride and reap the benefits along the way. Turning tycoon may be the destination but the fulfilment often lies in the journey.